Yosemite to Death Valley: a day of extremes!

I've just (8 Oct) added more photos to Yosemite Day Two.
Also, be warned: this is an exceedingly long post, as befits the journey it describes.
Also again: if I make the photos as large as they deserve, Blogger crops the righthand edge. You'll have to click to embiggen.

We woke early, breakfasted early, and left early because we had a long drive ahead of us. Retracing our steps east to get out of Yosemite Valley, we stopped to admire el Capitan, up close and personal. I can't call it the slightly disrespectful 'el Cap' again after looking up that towering face and seeing the miniscule dots of climbers' bivouacs, tiny and vulnerable set against that vastness. Not unless I climb it myself, which isn't going to happen. 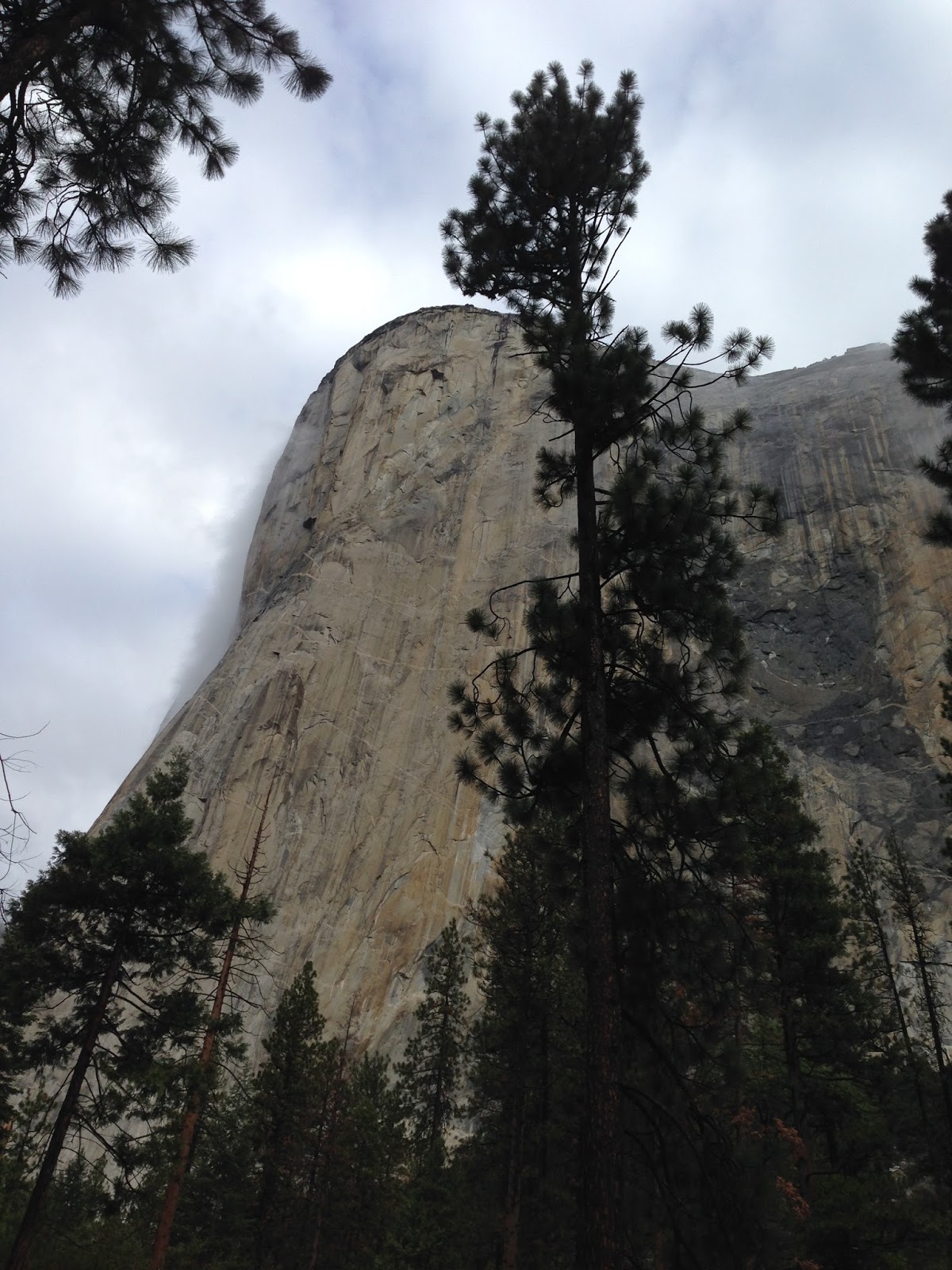 We then headed east on Tioga Road. As we climbed, we saw that last night's rain in Yosemite Valley had been snow at higher altitudes. 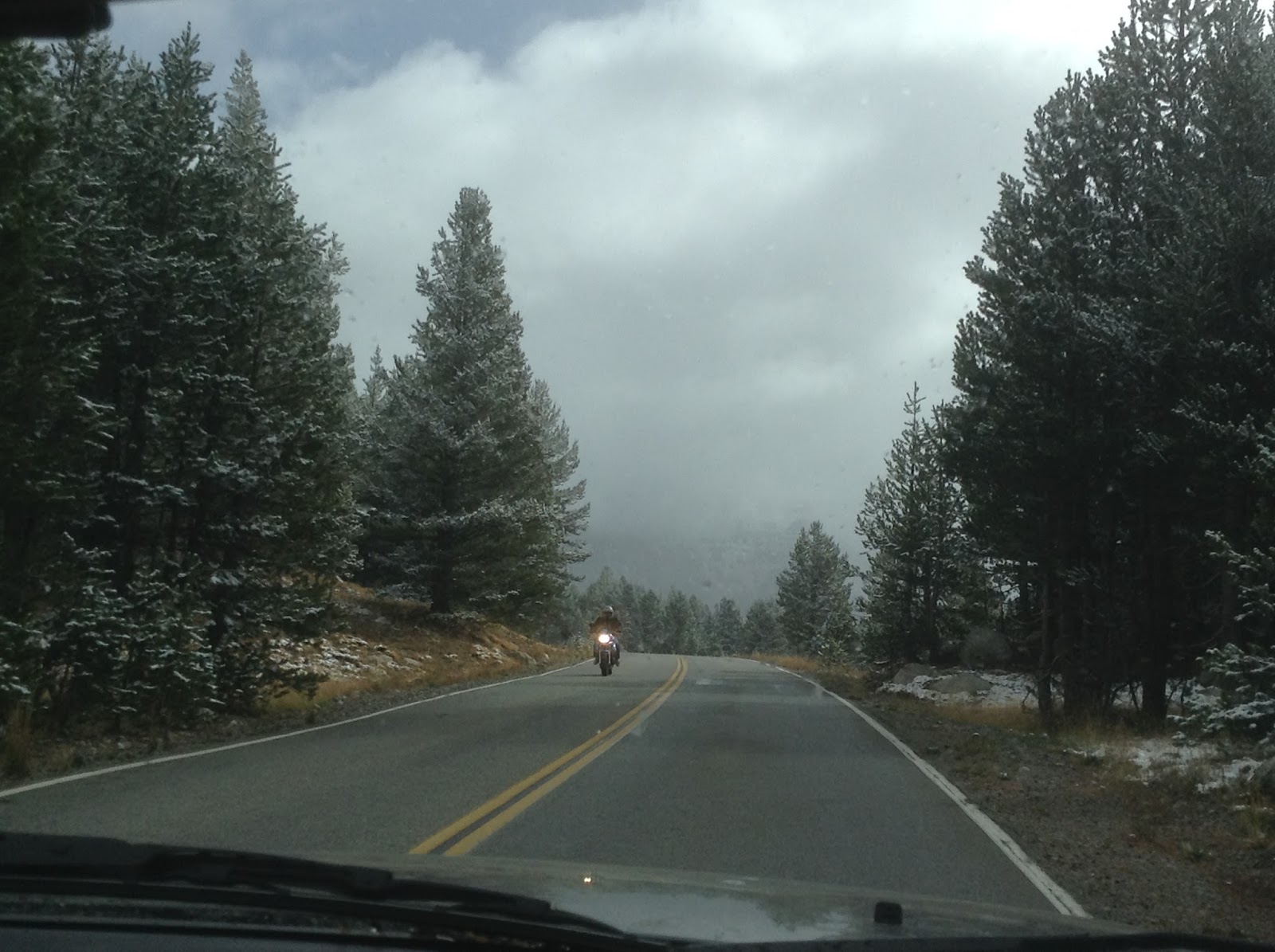 More granite began to appear, stark pale grey in the trees. If you look at the satellite view on Google Earth, you can see the pale rock exposures. At one point dramatic trees appeared beside the road and I shouted 'STOP! Bristlecone pines!' I'd only seen them in pictures before. 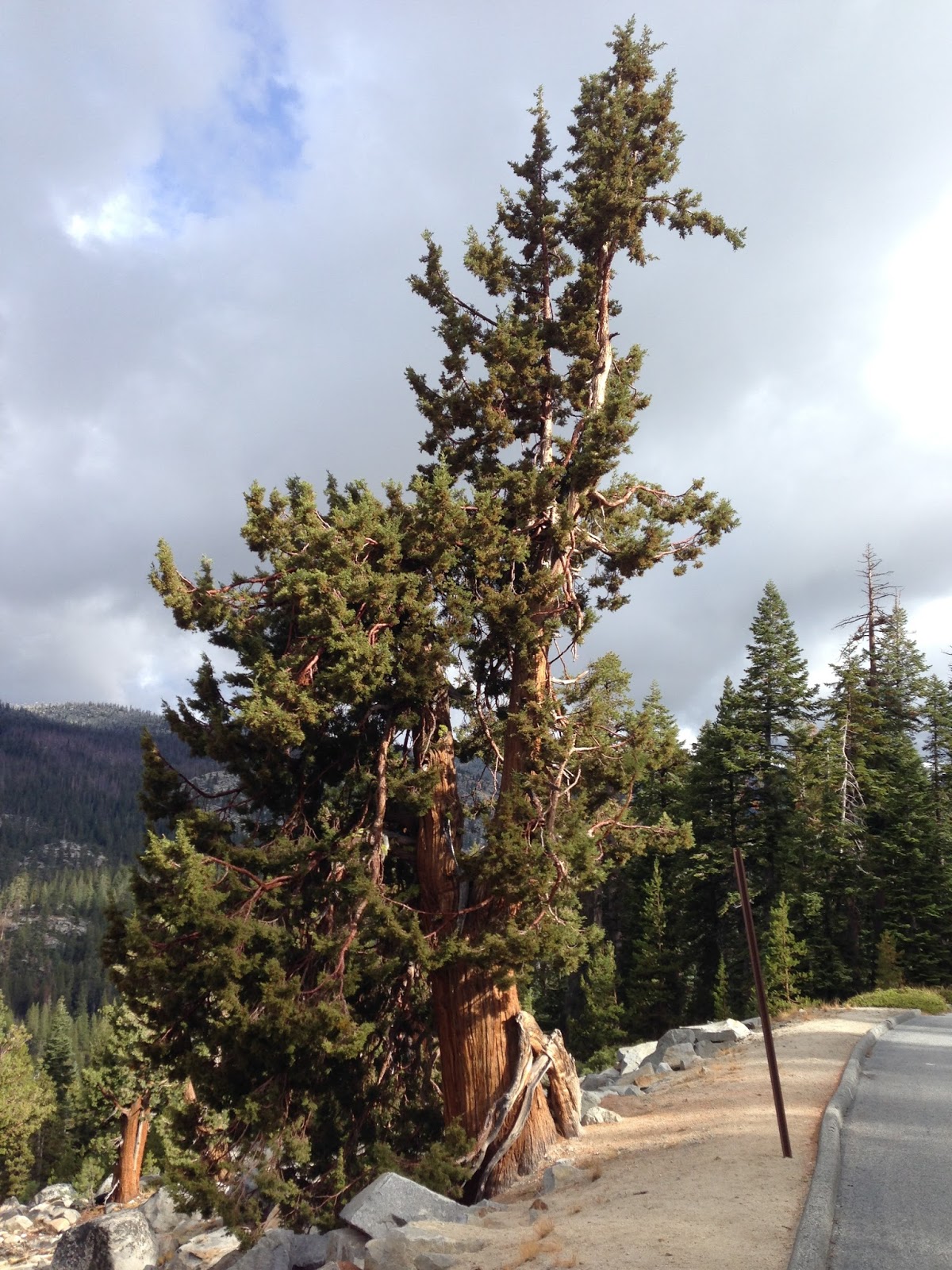 The views became steadily more spectacular as we drew nearer the peaks. 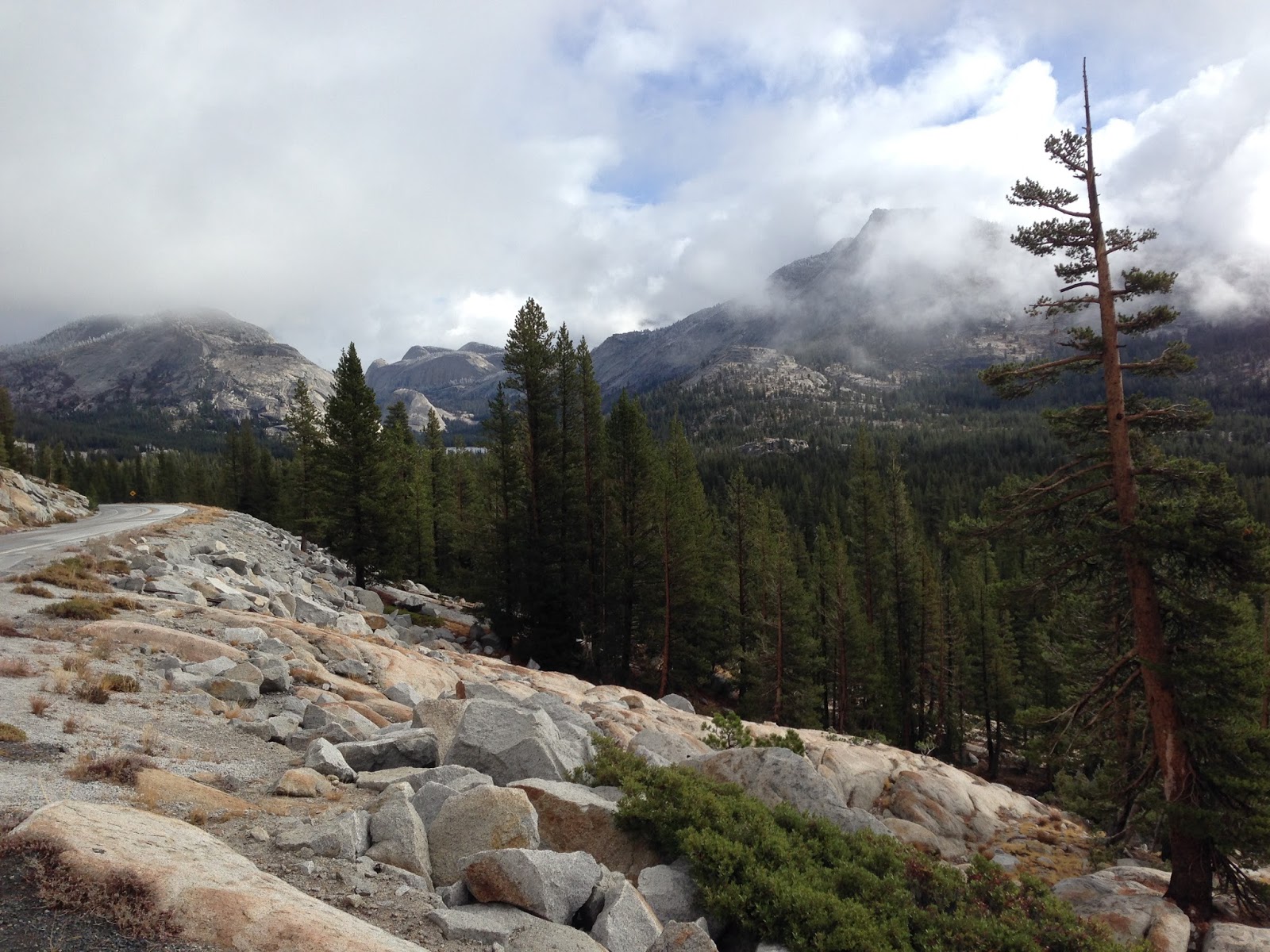 We rounded a corner and found Olmsted Point, which nearly took my breath away. Simply stunning. 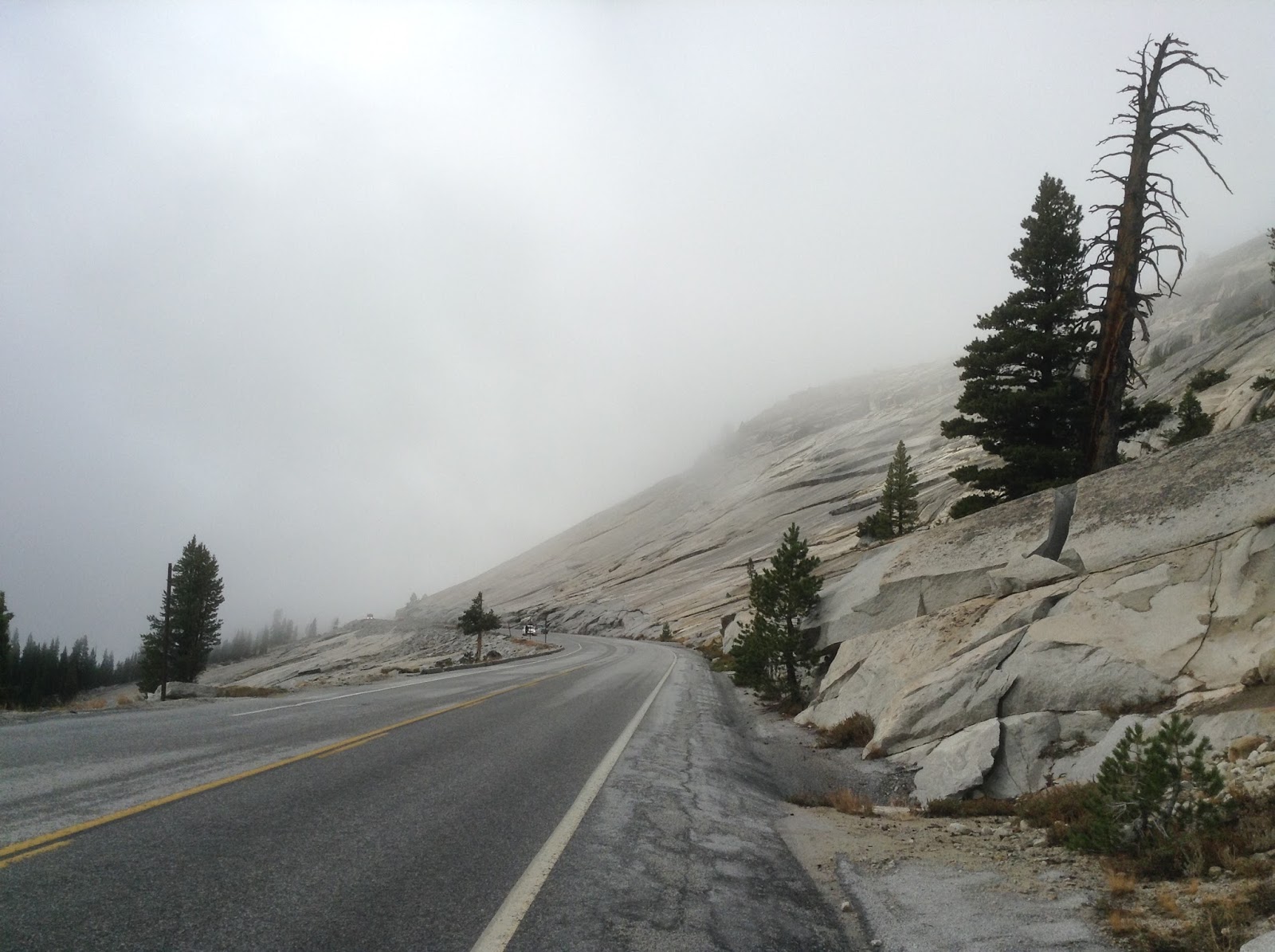 From here the road wound between the peaks to Tuolomne Meadows and the summit of Tioga Pass at 9,943', 3031m. Snow. Lots of snow. 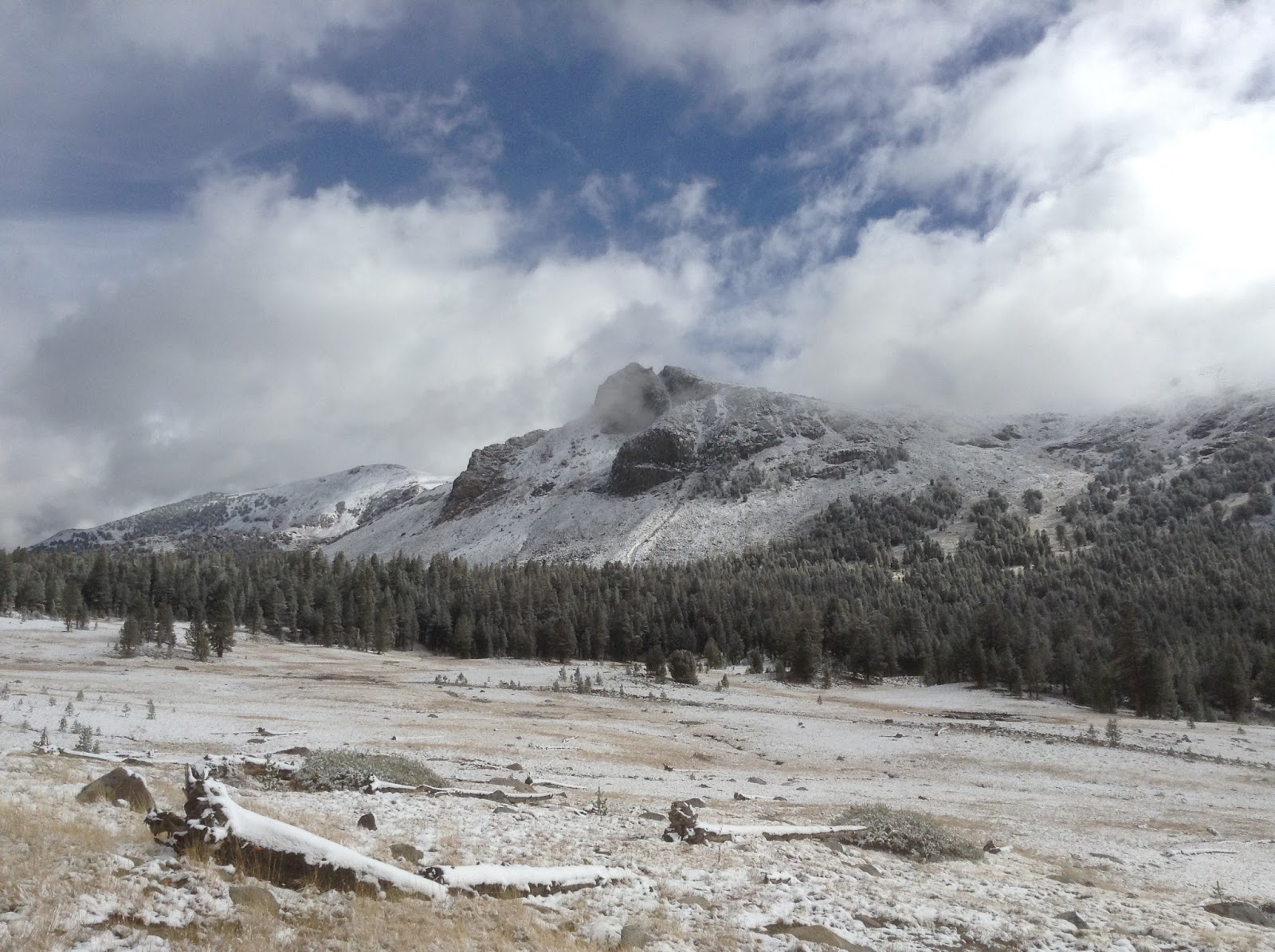 From here it was almost downhill all the way. The contrast between the gentle western approach to the Sierras and the steep eastern descent is an emphatic reminder that the mountains are still moving, rising in the east and tilting to the west. Ranges rise on the east, basins sink on the west (remember this, it will be important later). A very few minutes after driving across the snow-covered meadow, there was no snow to be see save on the highest peaks, and the trees were rapidly giving way to sagebrush and grasses.
There is a spectacular view east down the valley: 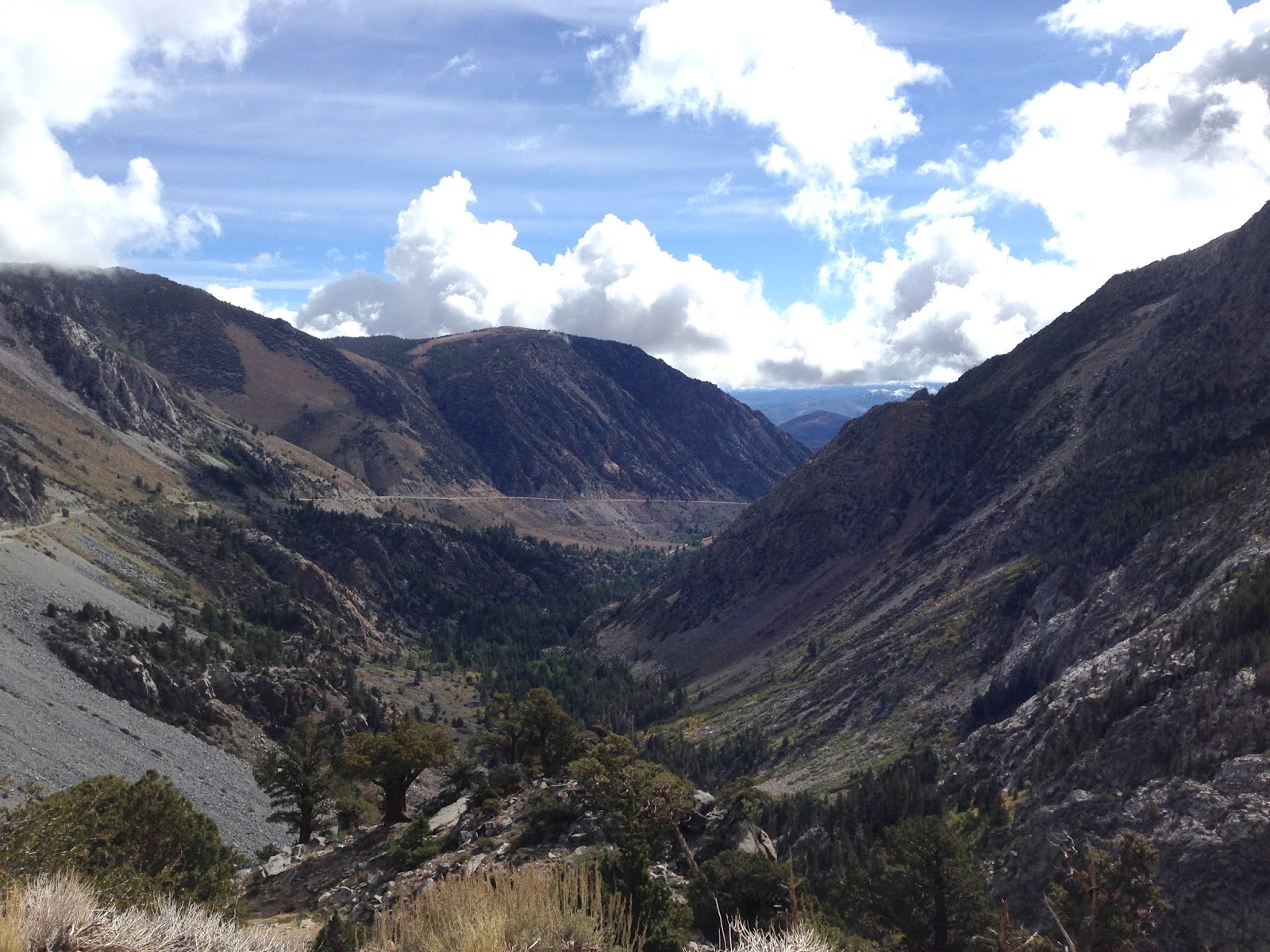 Reminiscent of the Bealloch na Ba in Scotland, but bigger and therefore without the tight hairpin bends. Just as well, given the size of a 'mid-size' SUV! 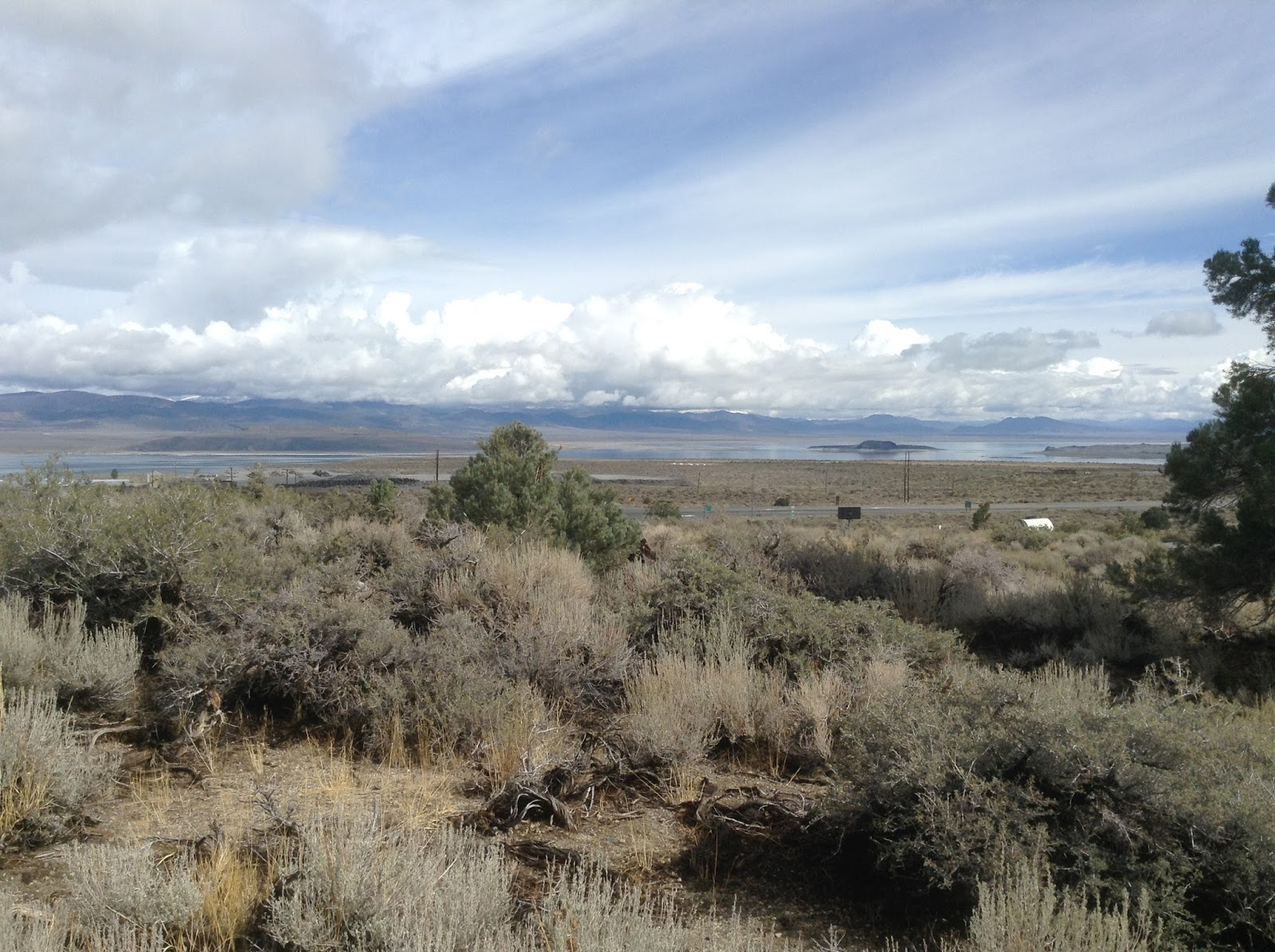 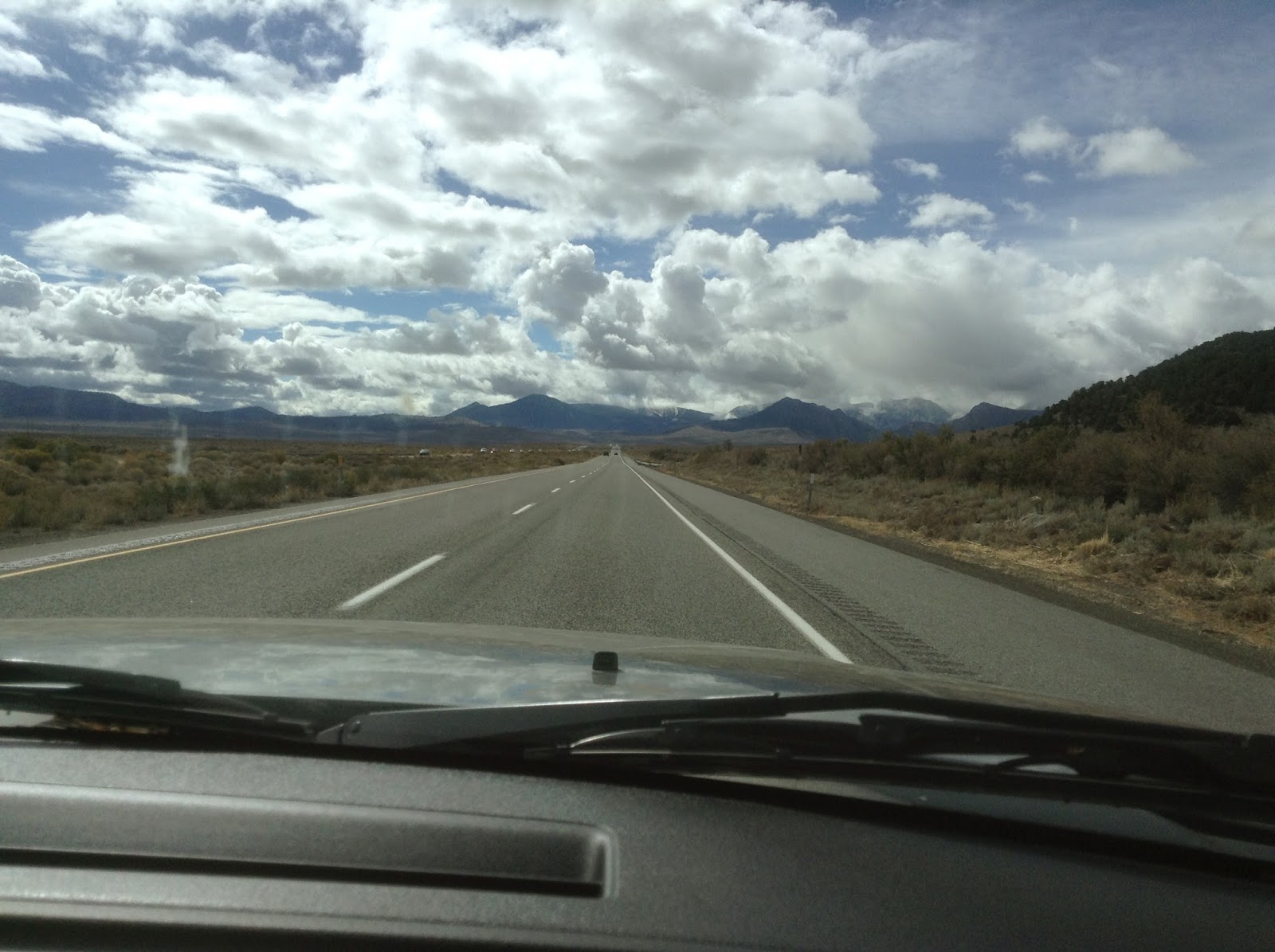 The heights of the Sierra Nevada rise dramatically from the land to our right. A. is driving, while I look at the landscape in wonder, then frantically search the geology books for the answer to yet another question. There's a section on rhyolitic volcanoes south of Mono –  something about obsidian – and we pass a roadsign for 'Obsidian Dome'. "Obsidian! Dome! Turn around, we've got to go back!" I am a nuisance, I know it. But still, we turn back. And it's worth it. A brief drive down an unsurfaced road (in good condition, suitable for rental vehicles). A brief walk across sand dotted with pumice (pumice!) and basalt. And then, a mountain of obsidian. A small mountain, but a mountain. Of volcanic glass. AMAZING! There are a lot of photos. More than I'm including here. 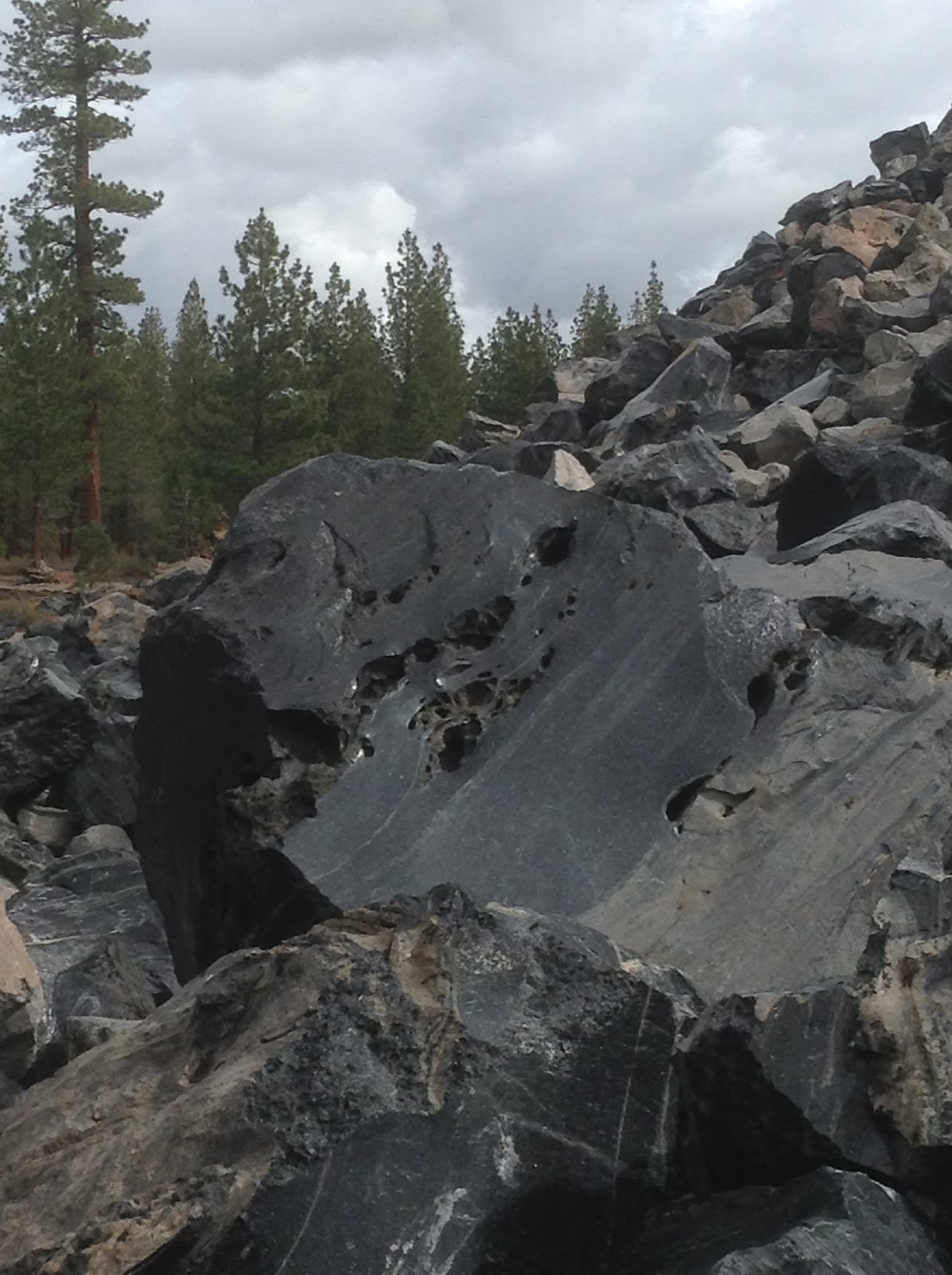 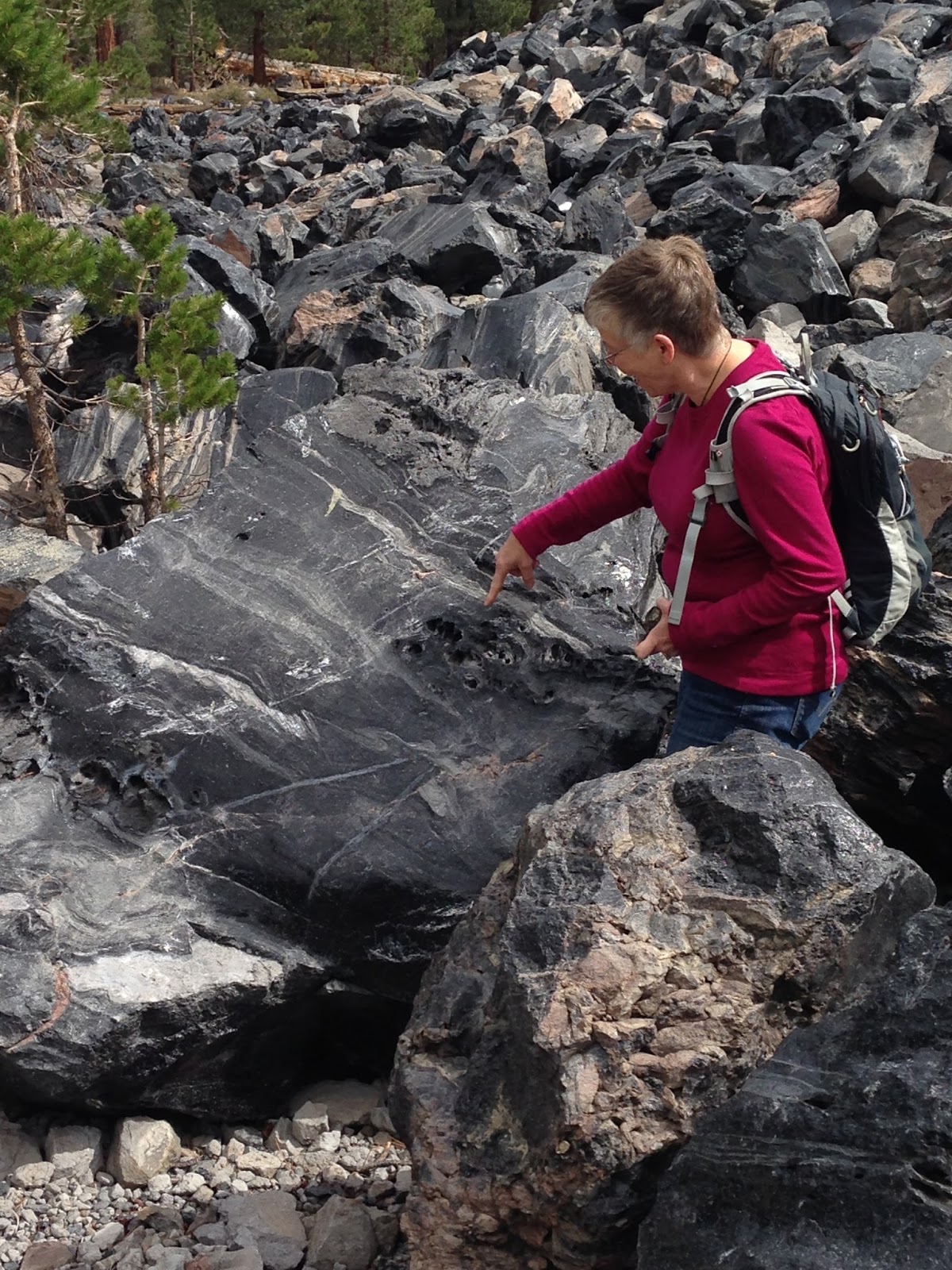 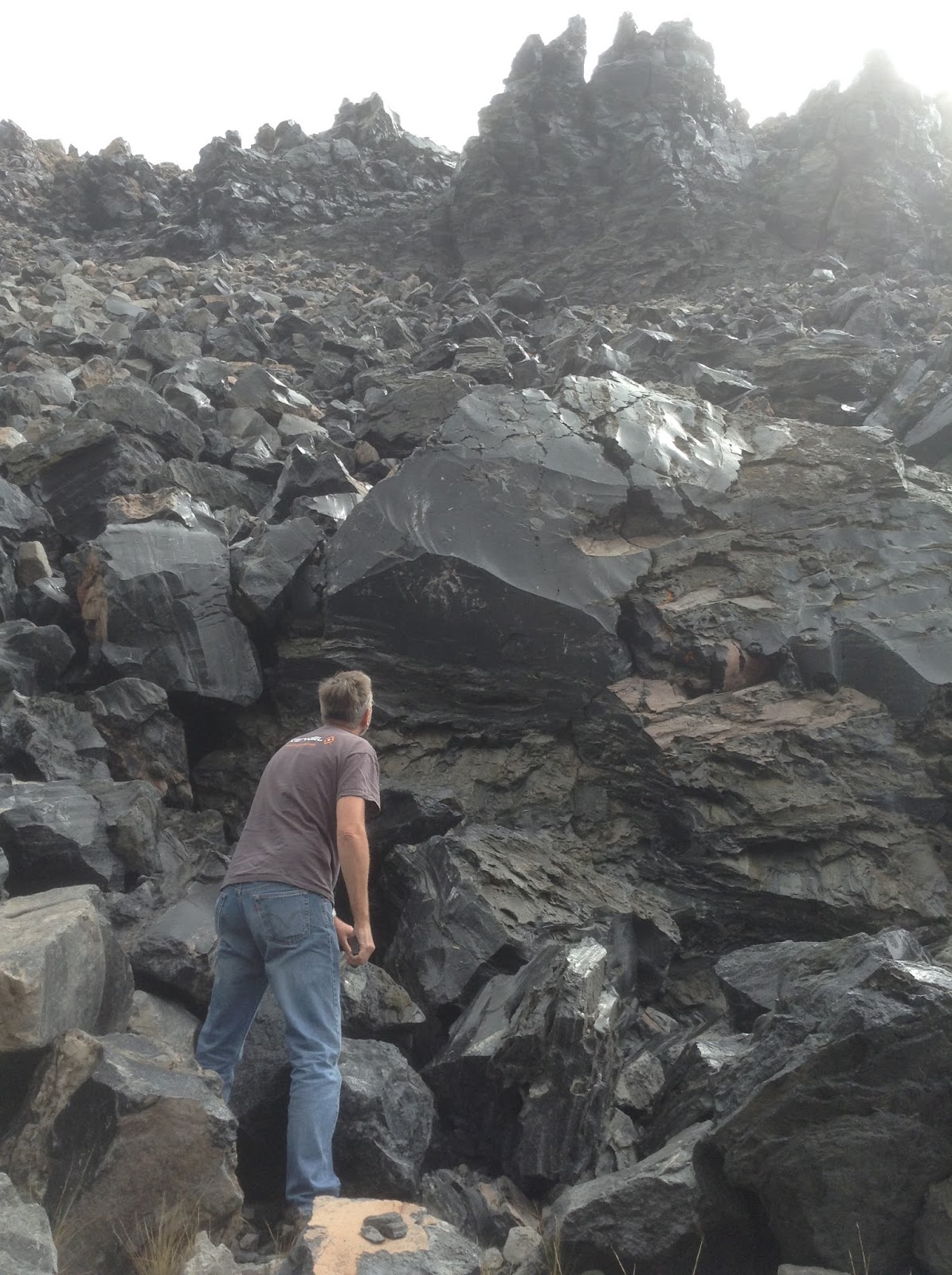 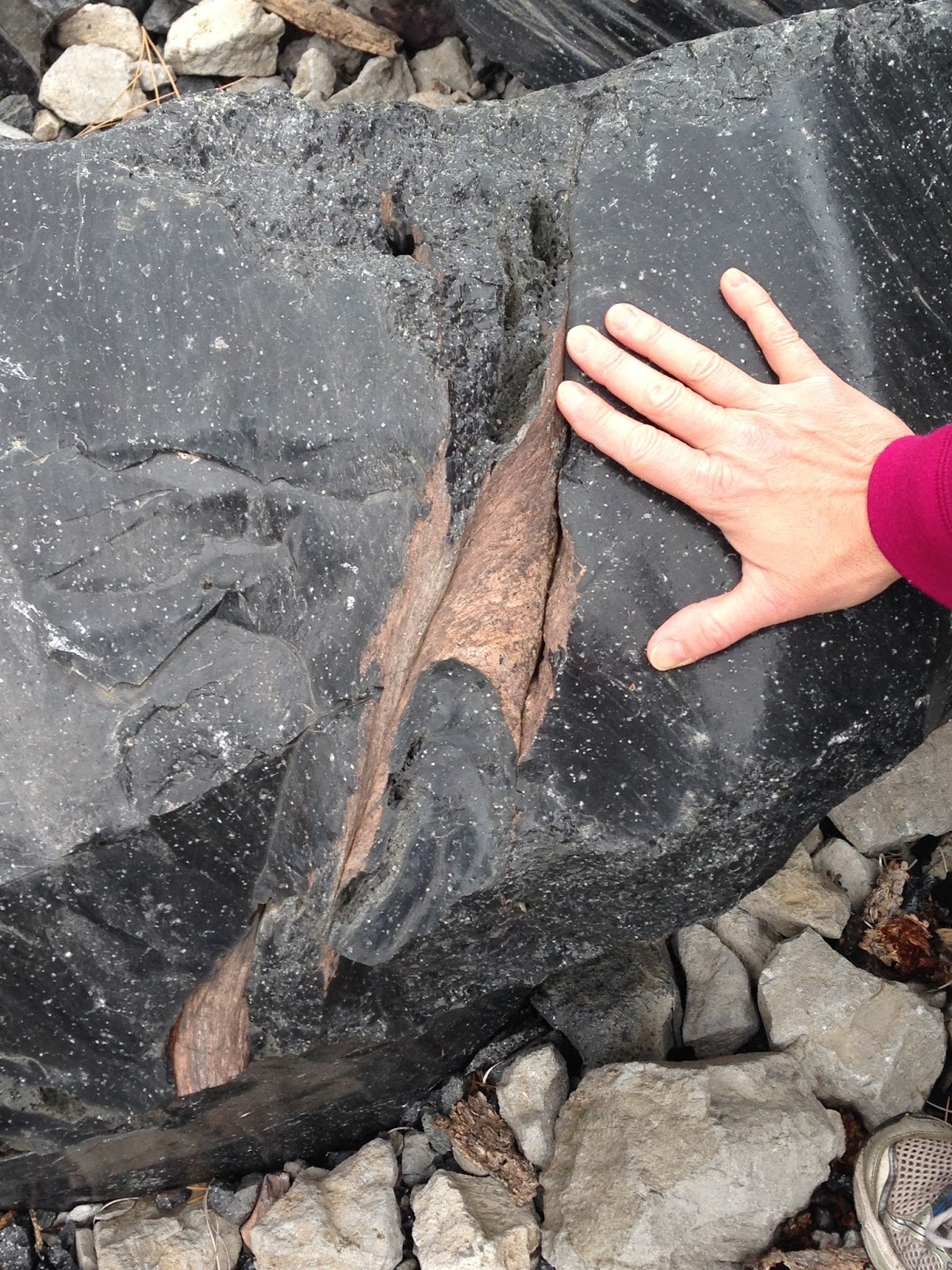 Just look at it! You can see it was ropy, thick liquid. There are air bubbles. There are places where movements of the cooling glass created filaments, like candy floss. Totally wondrous.

We left, each with a tiny hoard of sharp-edged, glittering fragments. Another cone is visible from the road. 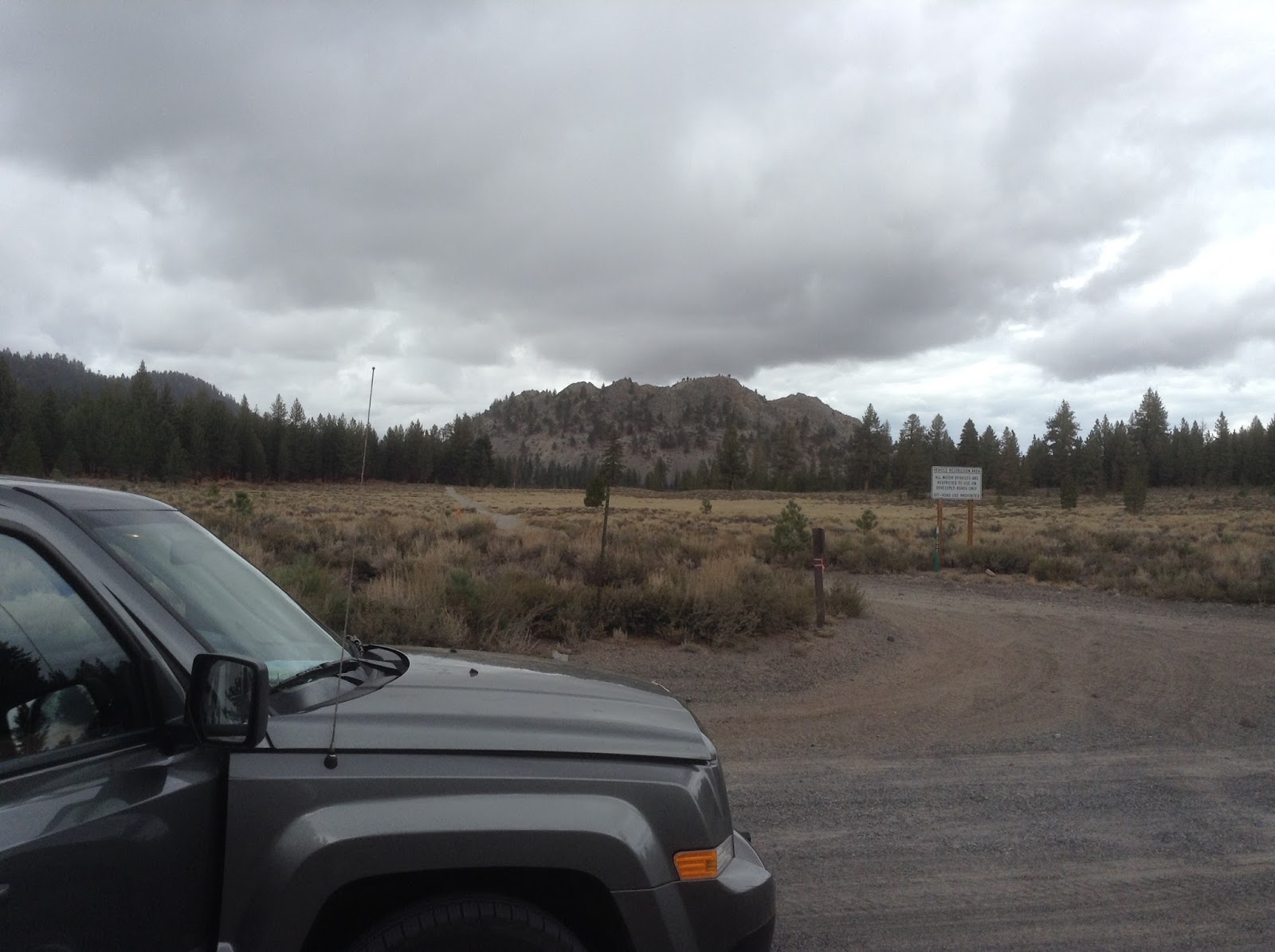 We continue south, and south, and further south. There are cinder cones at the base of the Sierra Nevada mountain front, formed where magma has forced its way to the surface along the line of the fault between the rising mountains and the basin along which we're driving. Basin and Range: it's a landscape described in McPhee's Annals of the Former World, a brief but fascinating tour across the geology of the US. This is the landscape I've wanted to see since I first read the book more than a decade ago. 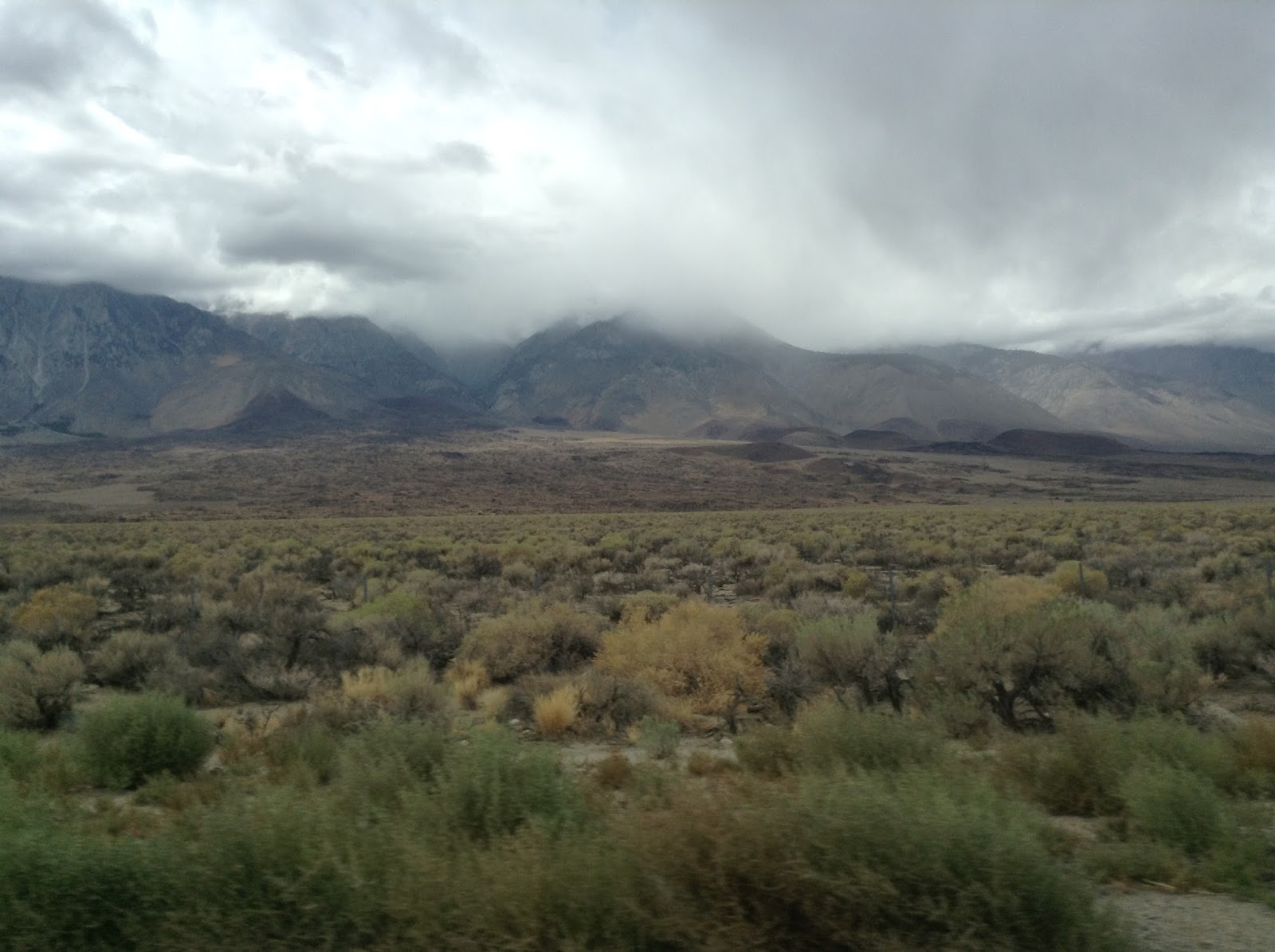 There is basalt from a cinder cone almost near enough to touch as we speed south. I am in heaven. 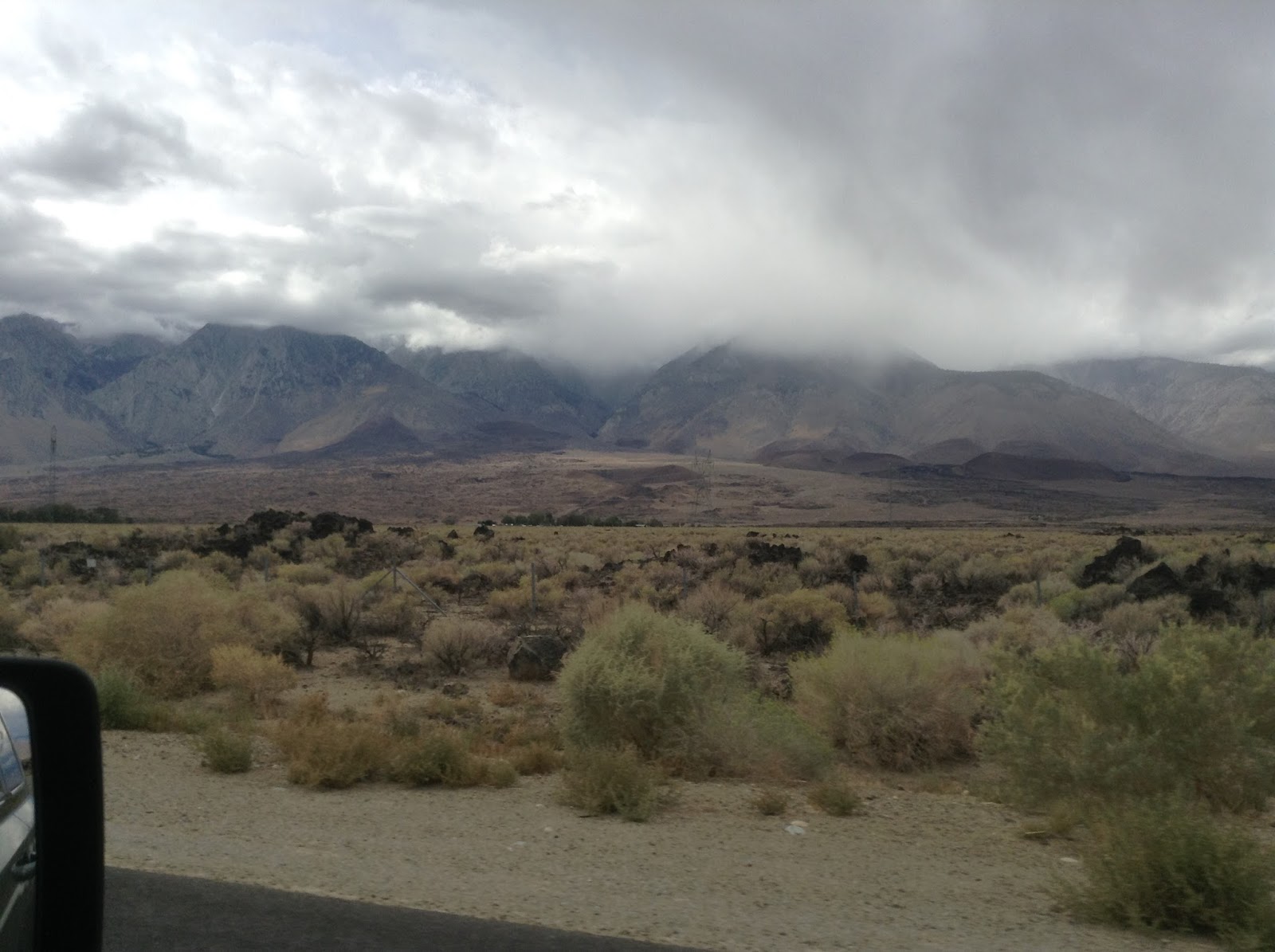 Well, near enough. Lunch at Eric Schat's Bakkery in Bishop (4,150'; 1260m). I ate my Reuben while eyeing the doughnuts and pastries in the counter behind A. We bought doughnuts, and a strange but delicious 'energy bread' full of dried fruit, and lavash (I've always wanted to know what it tasted like), and a bag of 'pine nuts'(!), piñon nuts from piñon pines. I asked the person on the till where the nuts came from and she looked at me as though I was simple. "From local pines," she said. I grinned like a madwoman and said "thank you" in my very best British accent.

South, and further south, until we turn onto Hwy 136 at Lone Pine. The land is even drier; almost no sagebrush, just clumps of dry grass scattered across a plain of sharp-edged rocks of many sizes. There are no trees on the mountains, nothing hides the astonishing beauty of the rocks. We stop to see what we can see (I can see rocks!) … 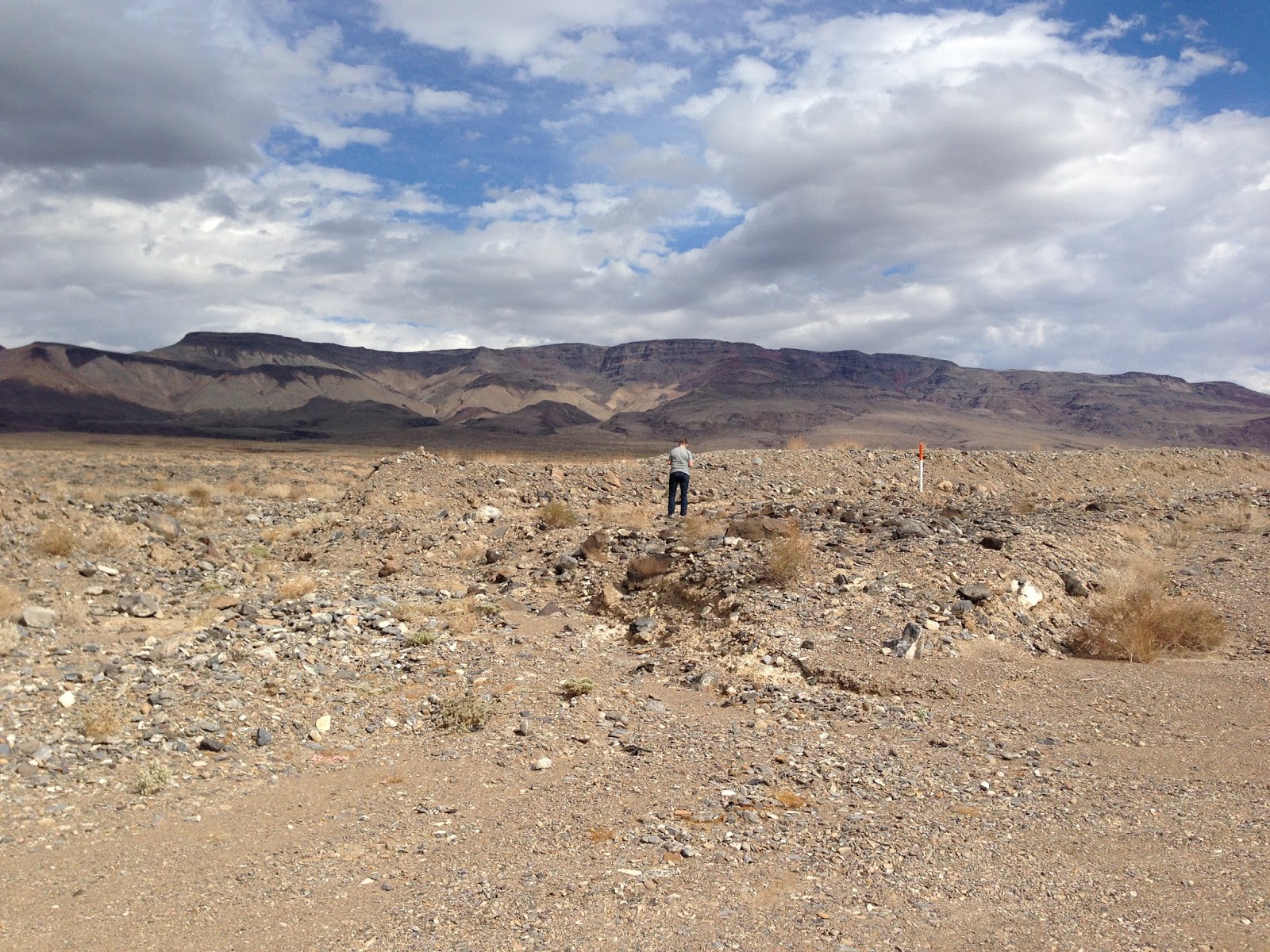 The black on those distant hilltops is not cloud-shadow, it's basalt and lava. We both love this landscape!

and A. not only spots a Collared Lizard, but manages a half-decent photo with an iPhone. I am very impressed, but clearly the lizard is not. It vanishes in an instant as we try to circle past without disturbing it. 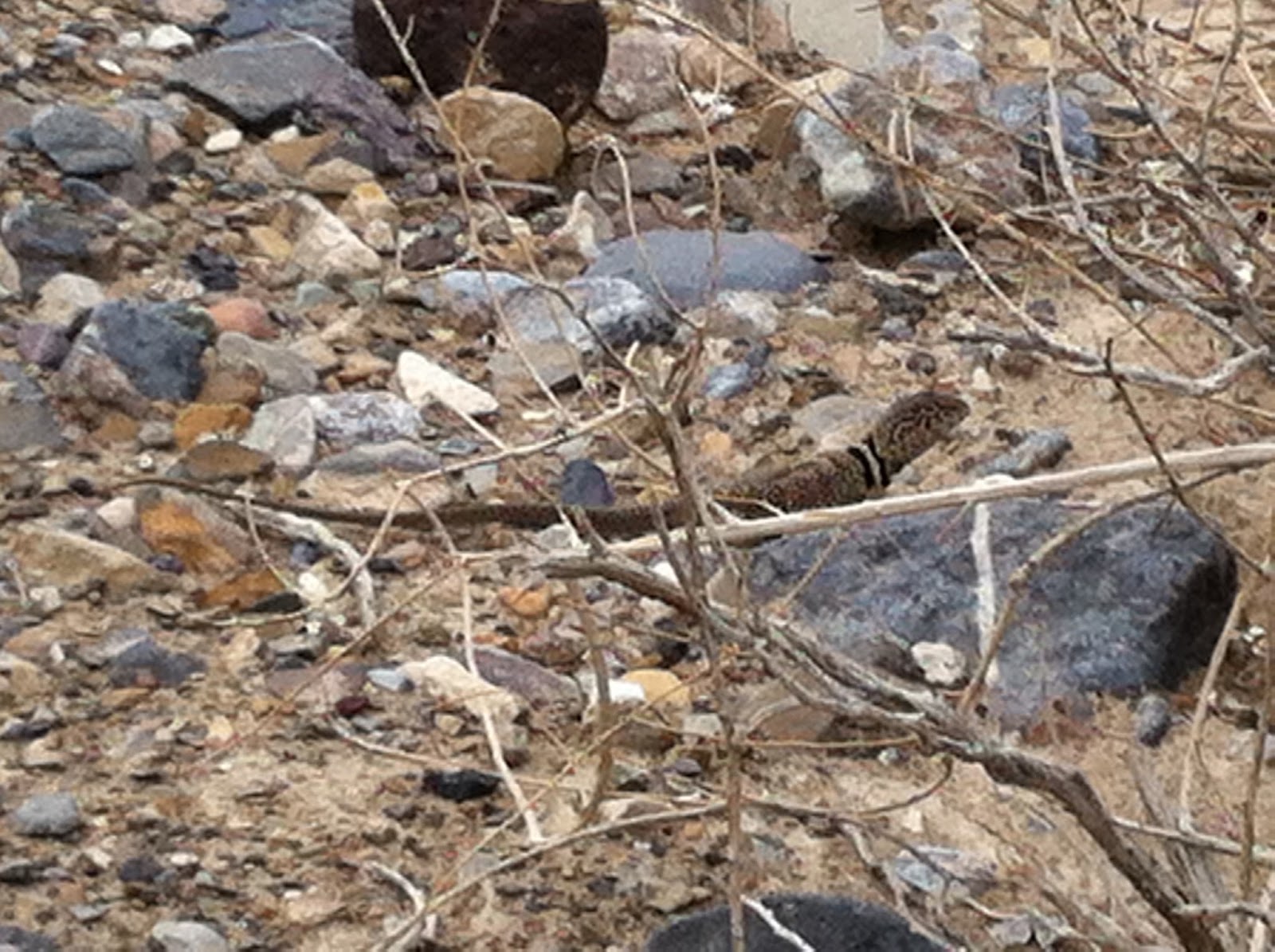 This landscape is beautiful. 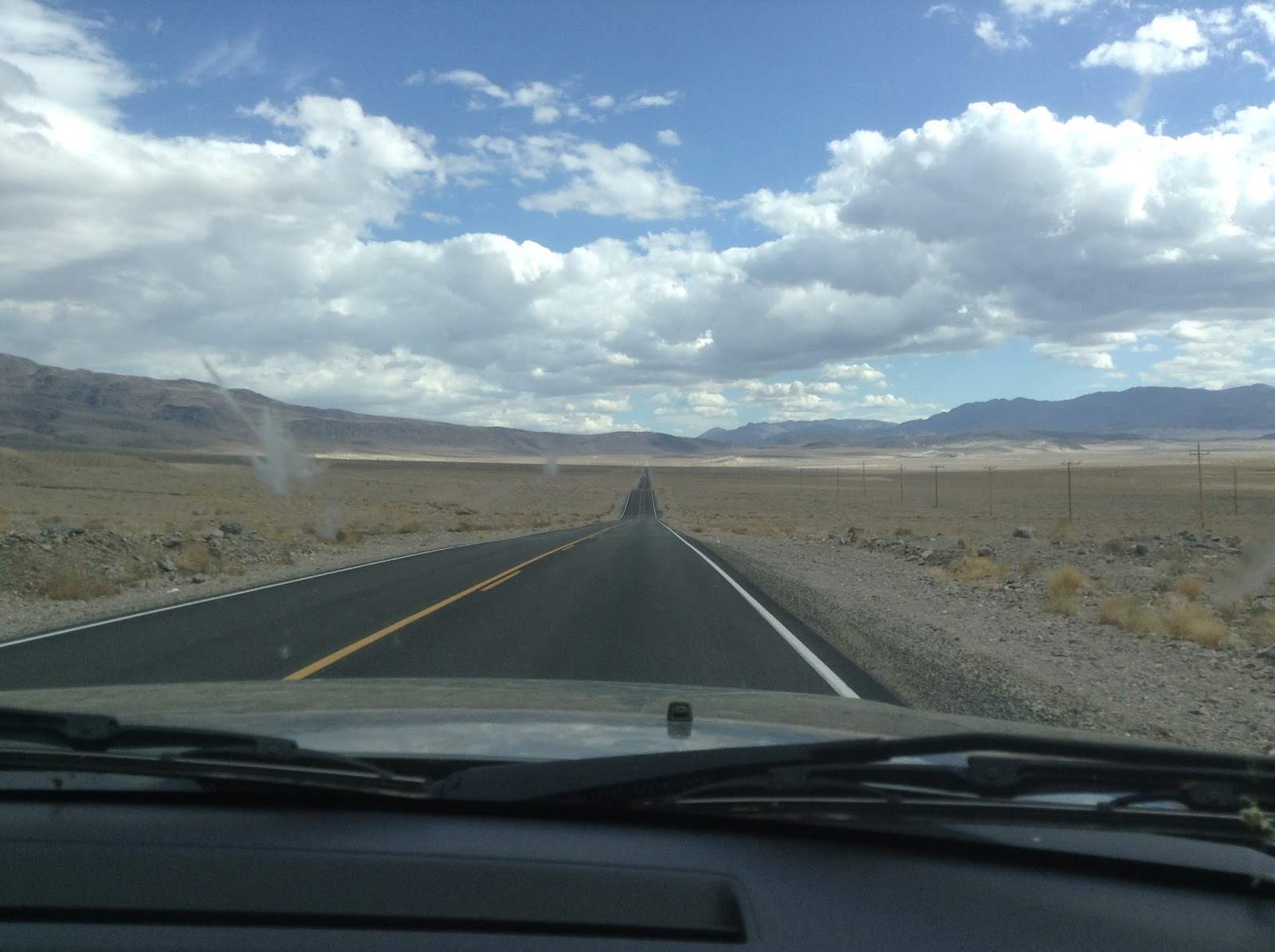 Harsh. There is no English green, just dust and memories of rain. It must be a hard place to live. But beautiful. As in the East Anglian Fenland, here the sky is visibly a hemisphere, a glowing dome of cyan and blue patterned with clouds. We are tiny people ourselves here, insignificant dots in this astonishing land. 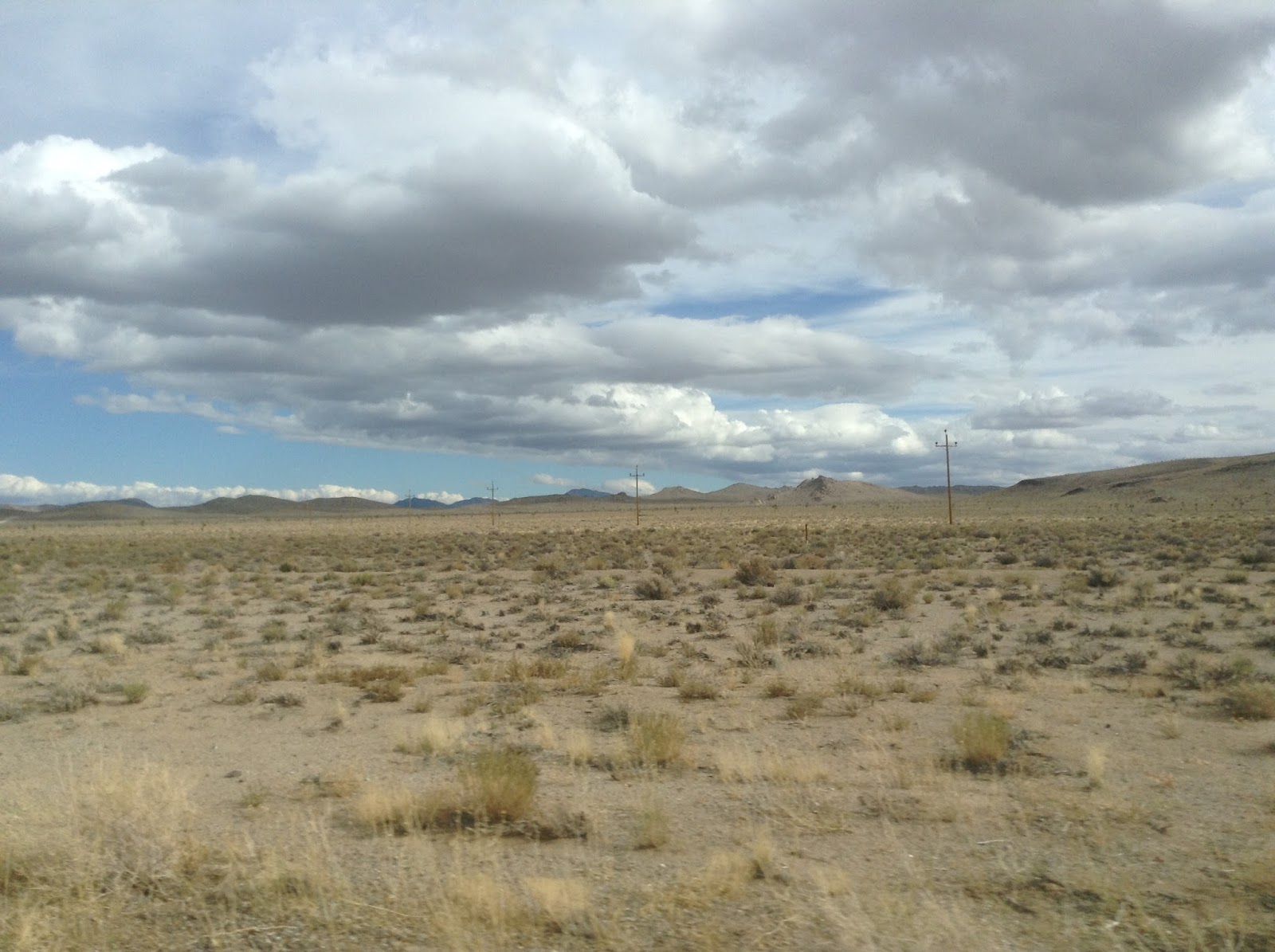 We drive on steadily across the dry land. The road climbs, the land falls away again: from the Owens Valley there is a gentle ascent into the Southern Inyo Mountains, a steeper descent into the Panamint Valley. A steeper ascent of the Panamint Range and then the land virtually drops away before us into Death Valley, where the next range, the Amargosa Mountains, is visible in the distance. It's late, and the storm that brought rain and snow to Yosemite seems to be following us south and east. 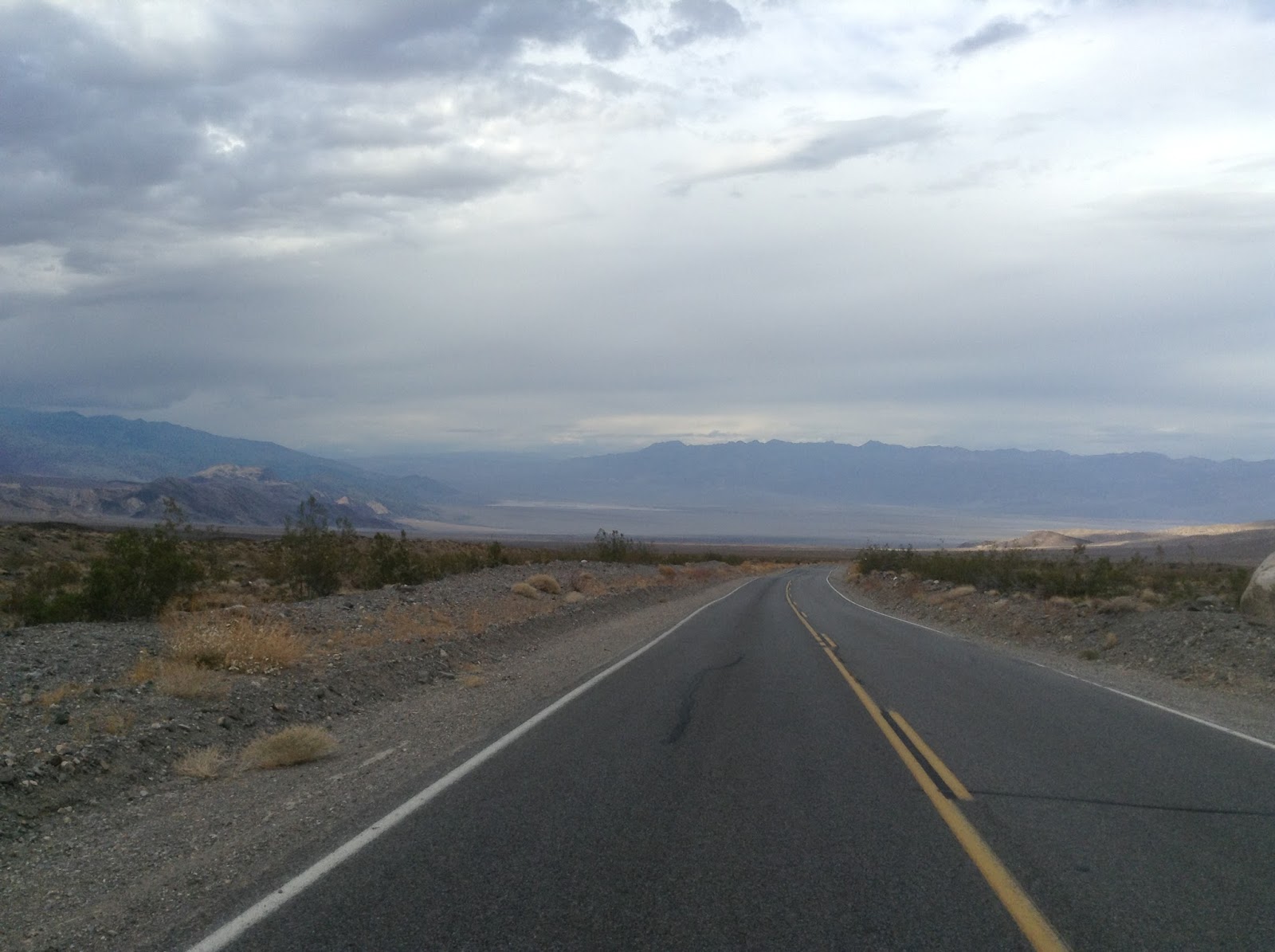 We drive on, down into the valley. It's warm. It's beautiful. I've been reading about the geology and landscape of this place for weeks, and now I can see it, see the sediment fans, see the mountains. See the sky… nothing prepared us for the sky. 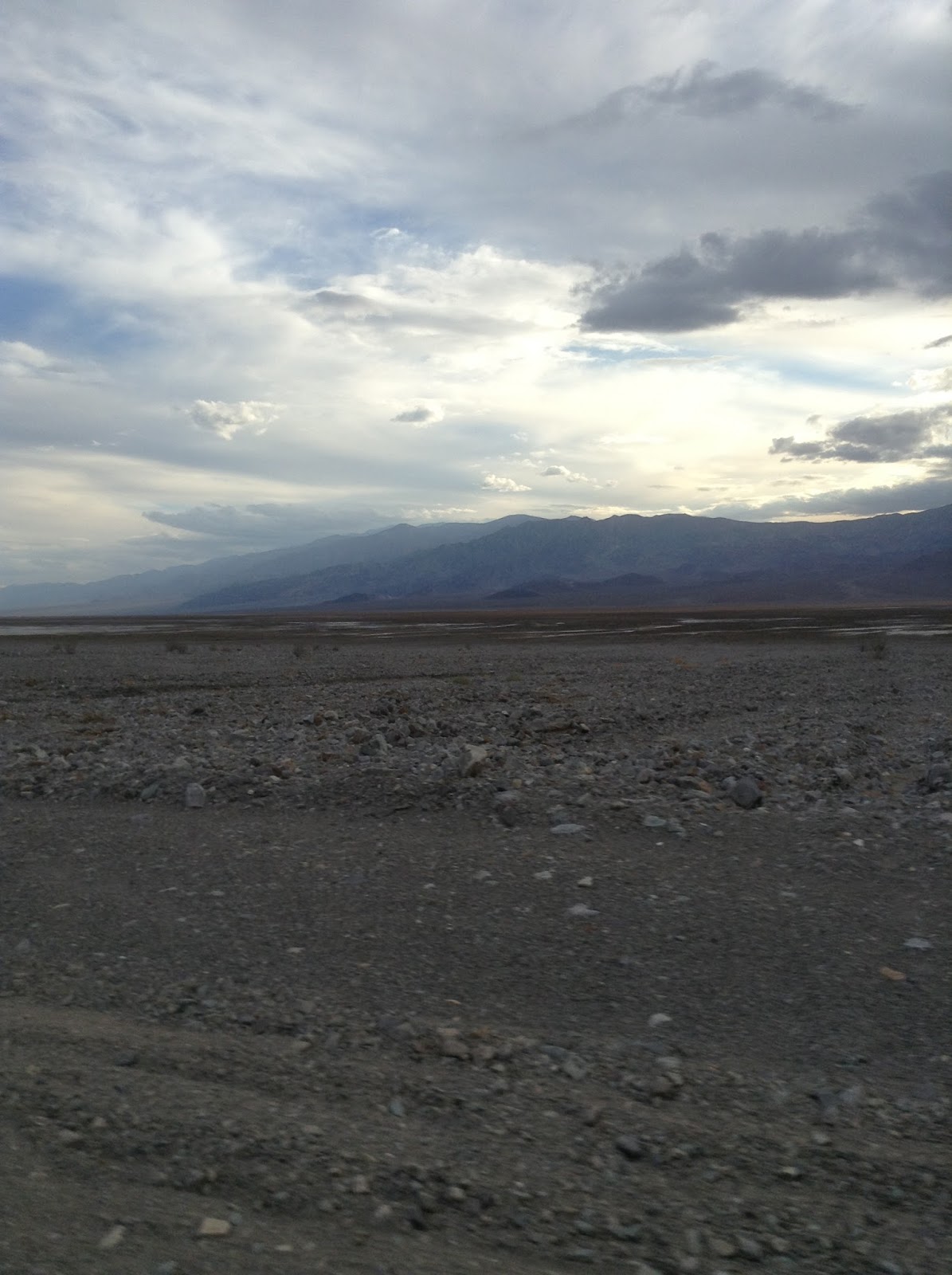 We checked in at Furnace Creek, dropped our bags, and piled back into the car to see more of this before the light fails. South again, on Badwater Road to the Devil's Golfcourse: 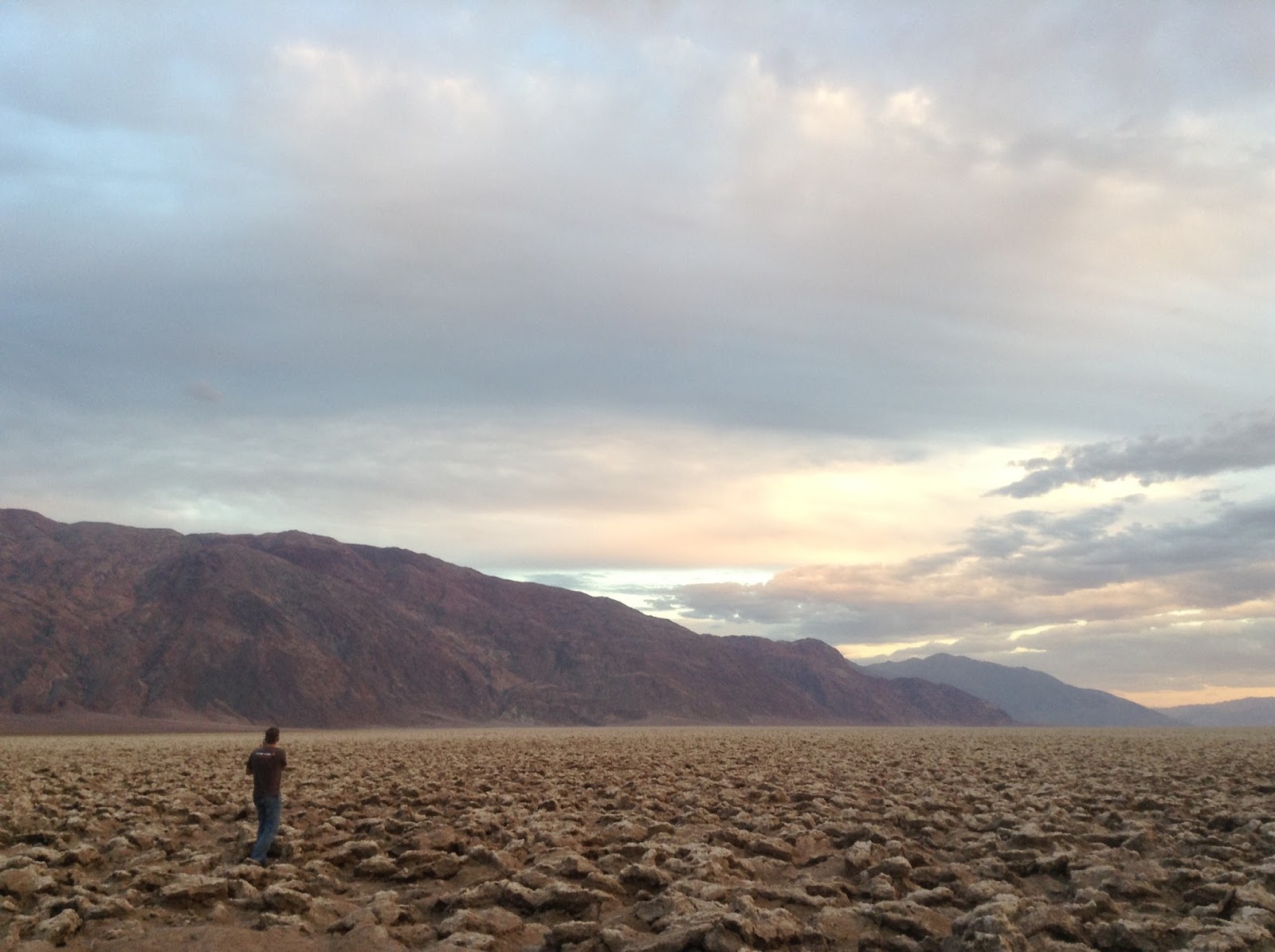 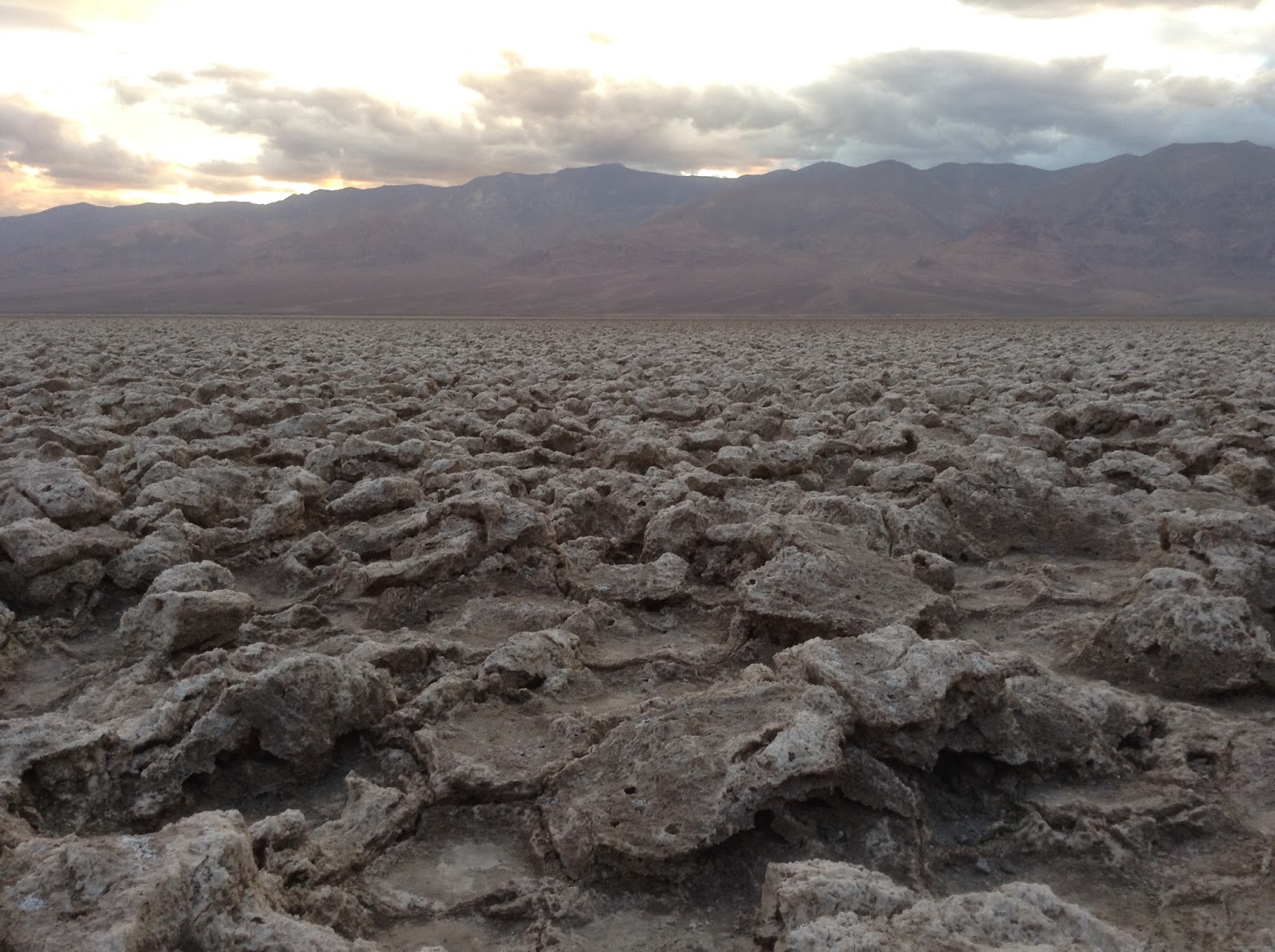 And, finally, the Badwater Basin, the lowest point in North America. 282' (86m) below sea level. We've traversed 10,000 vertical feet in a day, gone from early winter at Tioga Pass to what would pass for a balmy summer day in England, but is an autumn evening in Furnace Creek. Welcome to Death Valley!

We returned to Furnace Creek, where the boards of the verandah outside the restaurant are soaked with water for evaporative cooling. The wind is rising as we go in to eat dinner; we later emerge into a mild dust storm with a few scattered drops of rain. Rain! We brought rain to Death Valley!
Posted by sarah at 07:30

I love the desert as much as I love my coast with its fog and grassy hills and redwoods and salt marshes and and and... Easier to live closer to water, even if we can't drink it.