To Bodie and Beyond!

Writing this nearly three weeks later is bittersweet. The trip is fading from remembered reality to memory, but blogging is recalling it to present mind. I sit and look at the photos and I can again smell the dust, feel the sun on the back of my neck, the woodgrain under my hand.

So. We didn't check to see if we could have Mono Cone milkshakes for breakfast - that would have been just plain silly - but ate the last of our Schat's Energy Bread (we commend it: tastes good and keeps well!) and a handful of dried apricots with coffee, packed everything into the car, and headed north on 395 for the road to Bodie. As you may have noted, we don't often spend an entire day hammering out the miles; although it's great fun, provided there's road music on the radio, sitting in the car with the landscape rolling past like a projected film is no way to learn about a place. Several people had told me that Bodie was worth a visit, and they were right. We arrived early, before the park opened, in time for the flag raising ceremony. I know Europeans who are slightly unnerved by the frequency of flags and flag-raisings in the US - they see it as an indication of the strength of 'my country right or wrong' that has proved problematic - but while I understand their views, I also see it as symbolising something that most of Europe has put to one side, loyalty to a nation-state. At least I wasn't the only person taking a photo. 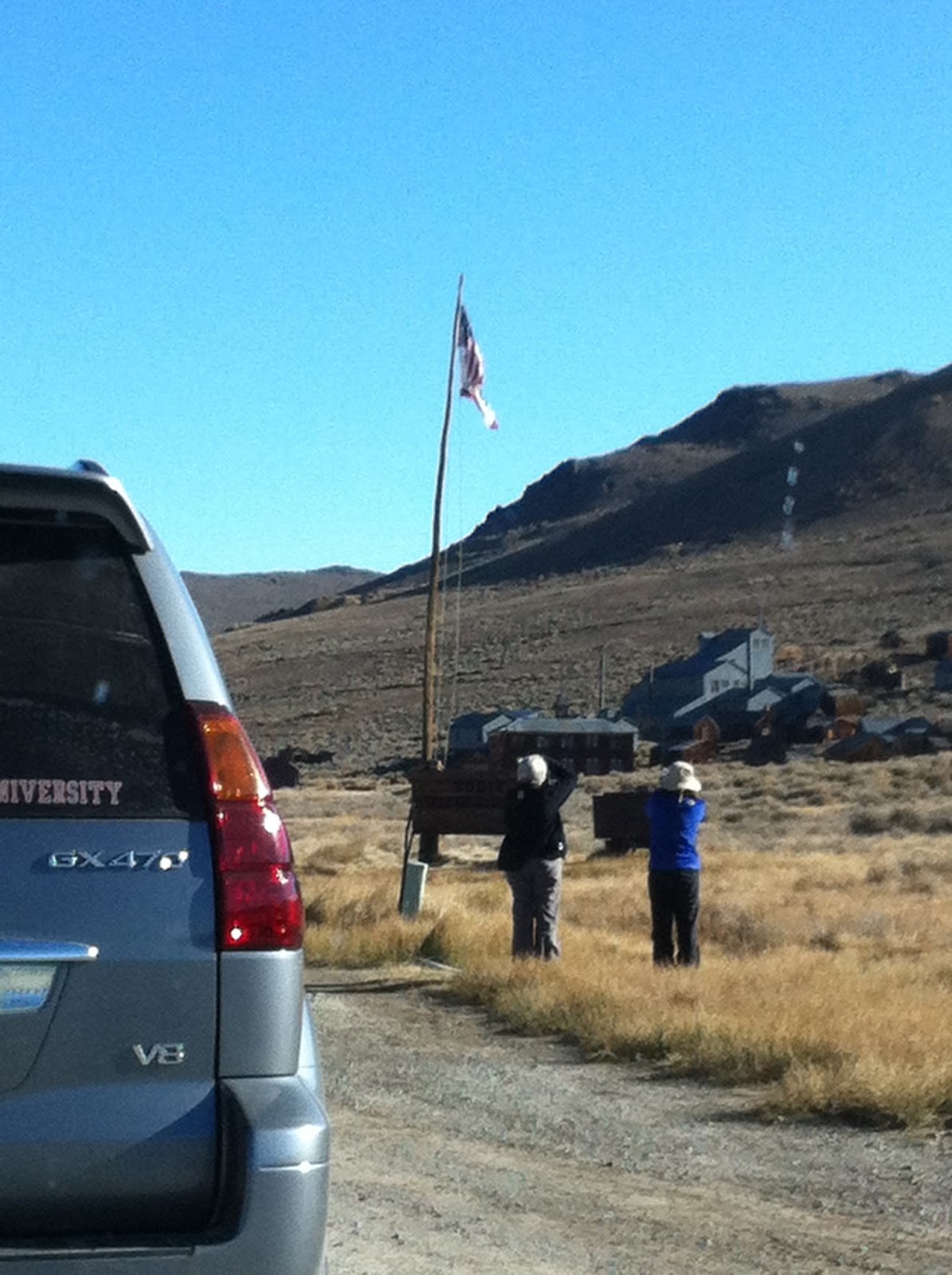 Bodie (also Wikipedia) is a gold rush ghost town, now a California State Park. Beginning as a mining camp c. 1859, although several mining companies worked the ores, little was produced until a new lode was discovered in 1876. By 1879 up to 7000 people lived in Bodie, in a town that extended nearly a mile west of what is now the park entrance.

This is A's panorama of the remaining buildings, looking east from the highest point visitors are permitted to reach.

With luck this is the Google Earth satellite view (wait for it… :-)

Look beyond the roads that Google marks and names, and you can see the lines of many more. The surviving buildings, while extremely picturesque, don't give a good idea of what this town was like in its heyday. Wikipedia has a photo c. 1890, showing the area where the surviving buildings now stand, and the mines on the hillside beyond it. Click for bigger, it's worth it.

I'd hoped to climb higher on that hill, but it's fenced off for the safety of visitors. Given the density of mine workings, perhaps it's just as well. Look closely at the area around Bodie on the satellite image, and the extent of the mining becomes evident: this was a busy, busy landscape in the late 19th century. The tranquility of the park makes it hard to imagine the place as it was. 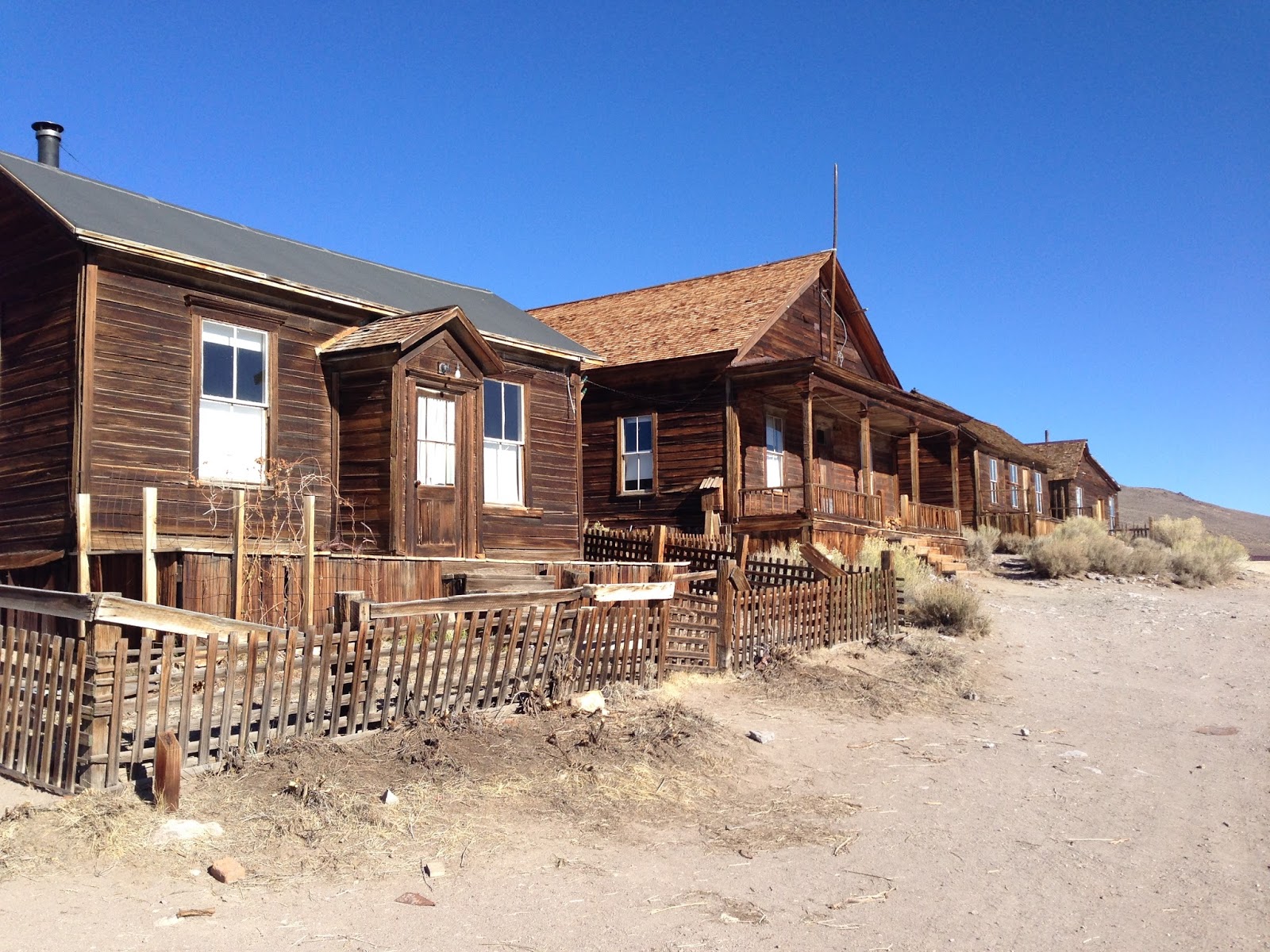 The buildings in good condition house park workers; others are left as they were when abandoned or (we suspect) artfully restored to what the interpretive specialists thought appropriate. We eyed relative amounts of dust and differential fading on labels analytically, because we're like that. No photos, though. 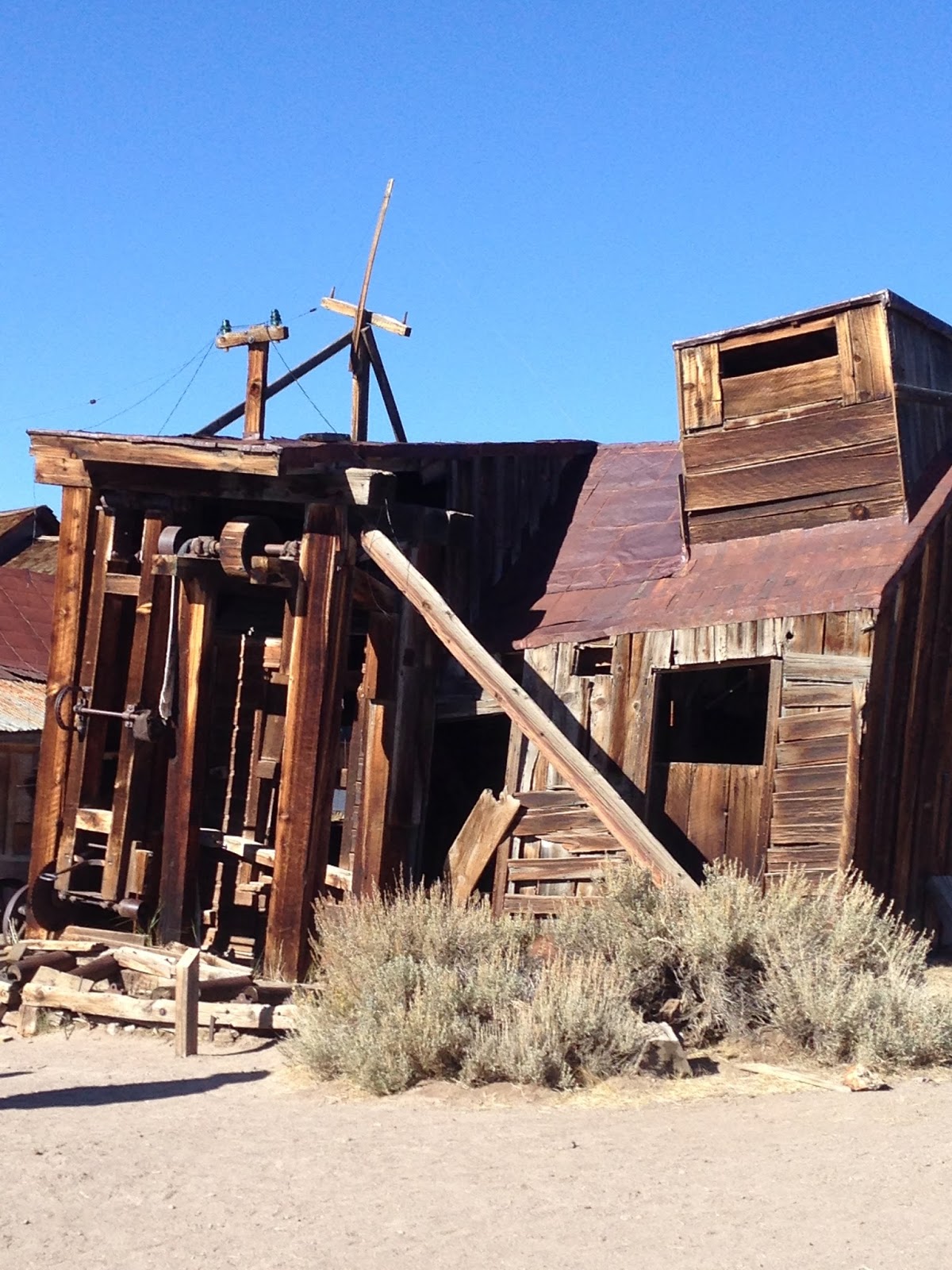 Rust-reds and browns in strikingly beautiful contrast to the glowing blue sky.

There's very little interpretation, even in the Visitors' Centre. We had a reasonable understanding of the  mining and refining process; we wanted more, and much more detailed information, but the display cabinets were full of artefacts of the period: clothing, glassware, ledgers. Attempting to instill empathy for those who lived here, rather than information about why they were here and how they earned their living. We bought Bodie "the mines are looking well"  for the information we wanted (it's a lot cheaper in Bodie!). 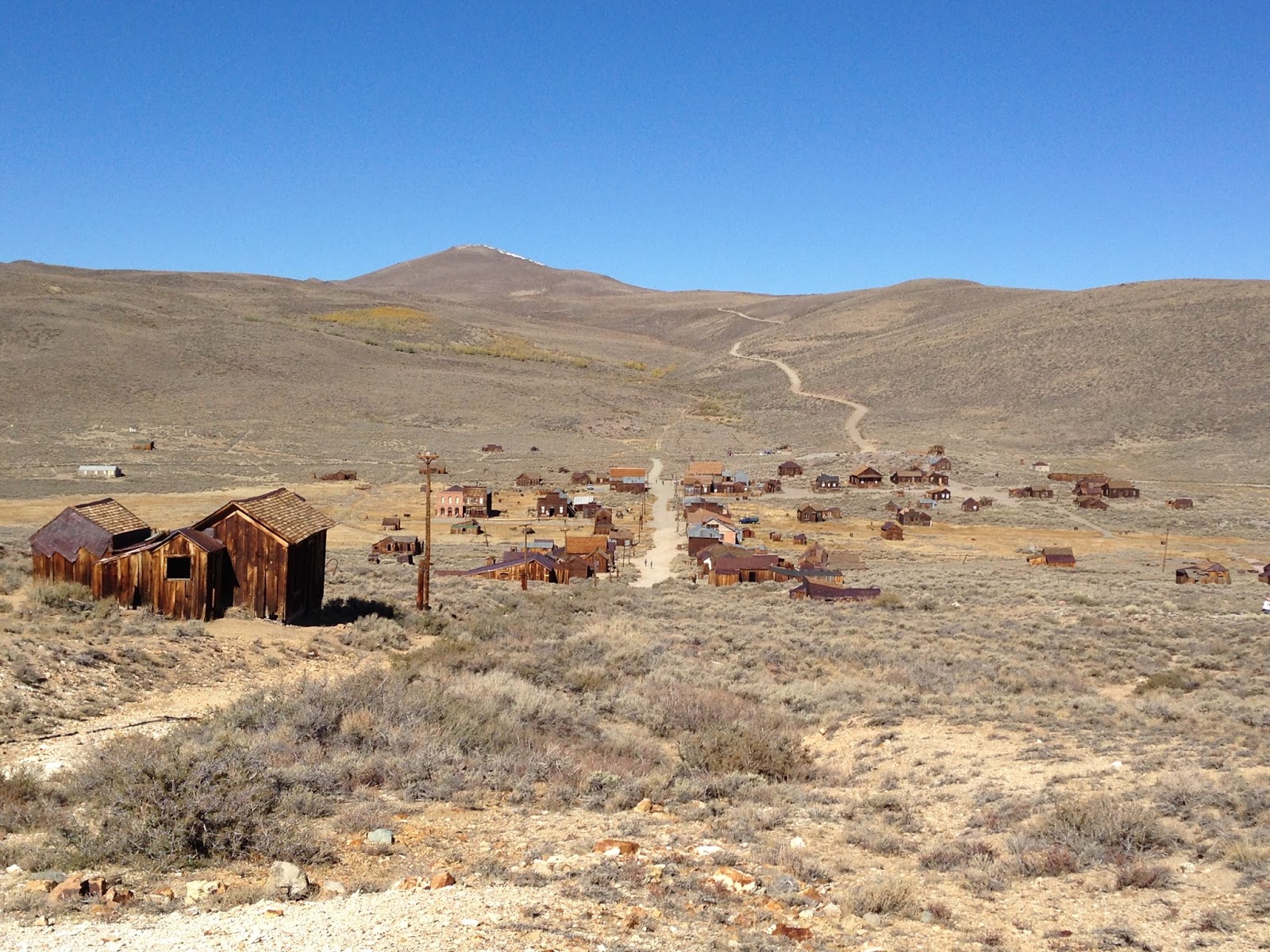 Bodie sits on a plateau nearly 8500' above sea level. It's high desert, tied with Barrow, Alaska as the US locality with the most nights below freezing. Look at those buildings again. 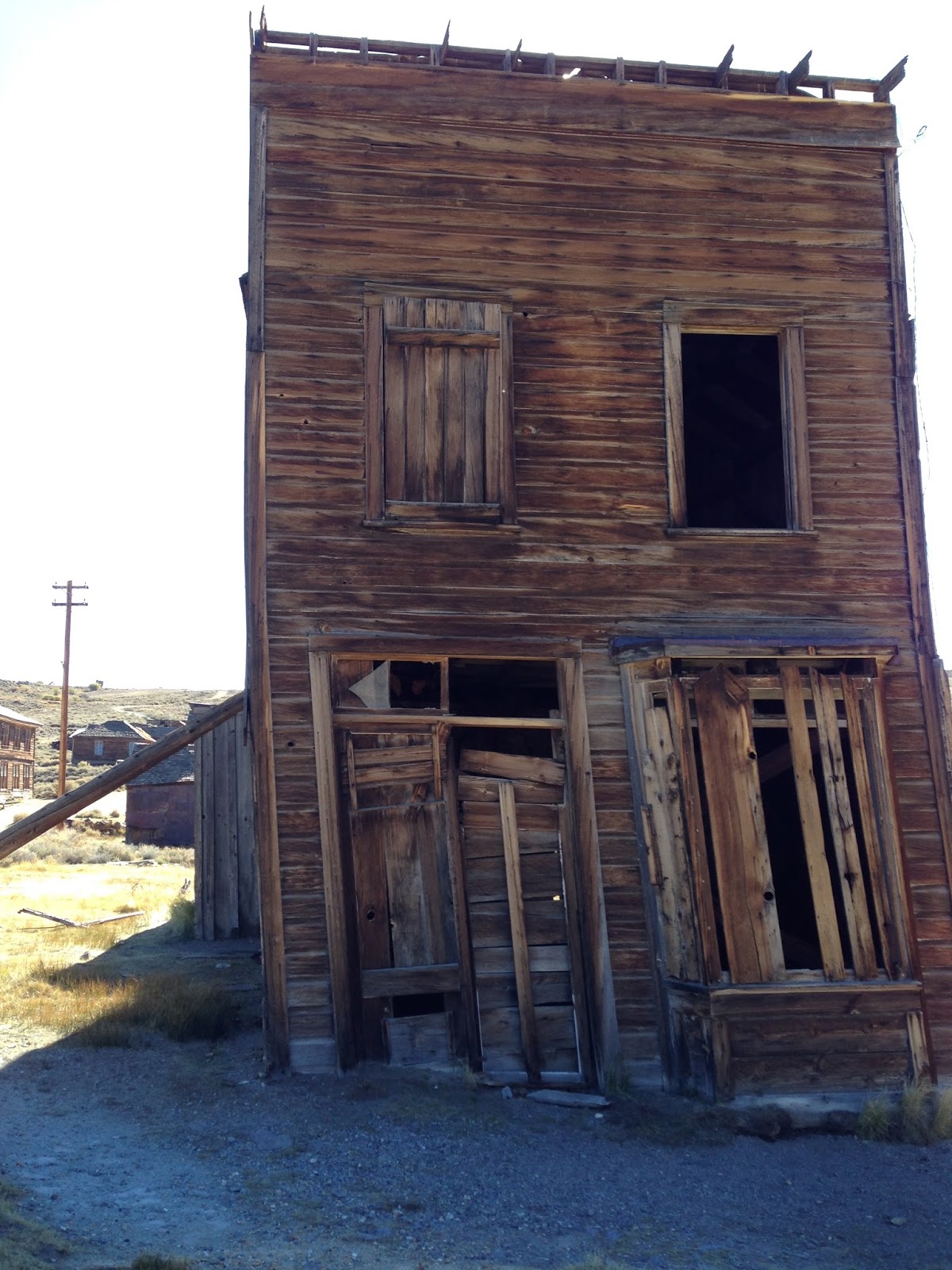 Timber, plaster and lathe if they were lucky. Single pane glass windows (one of the surviving houses has a conservatory about 2' deep built onto the house; with scarcely room for a chair, even though it's now filled with shelving and a random assortment of bottles, it looked more to us like an attempt to trap warmth for the sitting room). Life here was hard. Until 1881, when a railroad was built from Mono Lake, everything - timber, fuel, food, booze, mining equipment, timber and more timber - was hauled in by road, and the gold - c. US$34 million was shipped out. We wondered how large and beautiful the forests around Mono Lake were, in the days before the Gold Rush. We wondered where the water supply was; there's a creek, but it runs right below the mine works, where cyanide was used to extract gold from the crushed ore. We really wondered whether anyone had analysed the creek sediments recently … but whatever is in there, it's not harming anyone now. 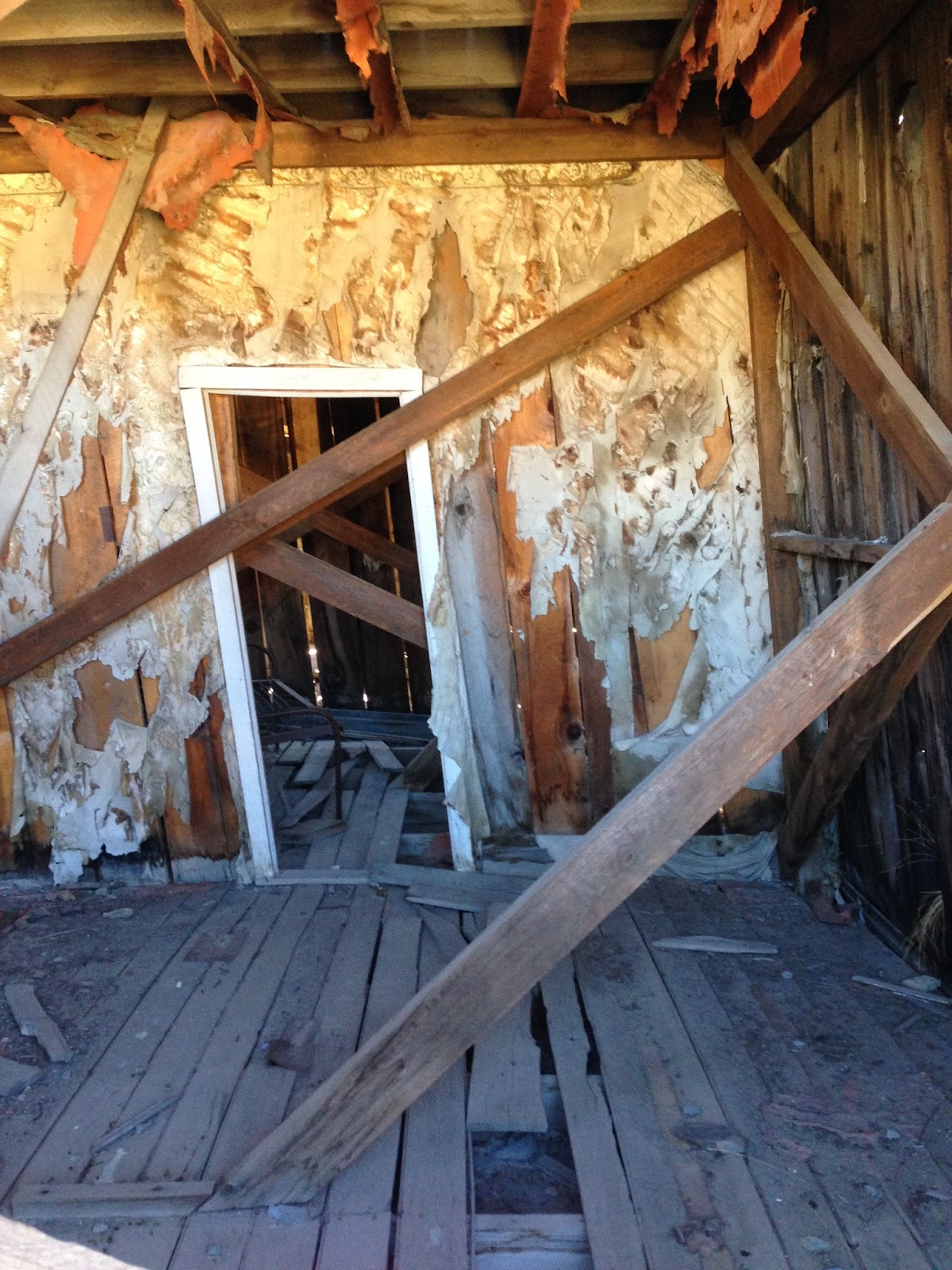 There's a reconstituted mine headworks by the parking lot, and elsewhere a small junkyard of abandoned equipment. We wandered around it, admiring it 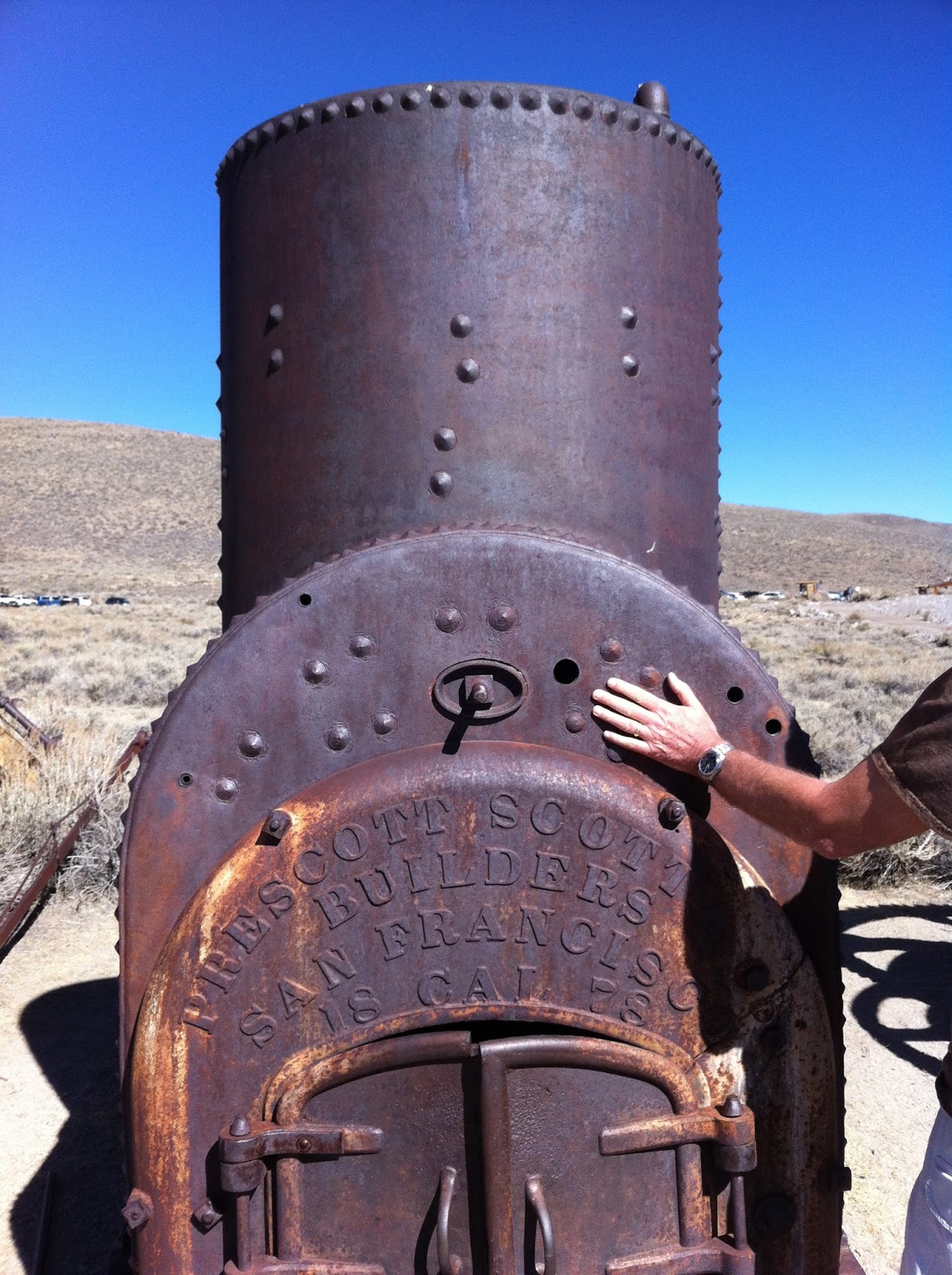 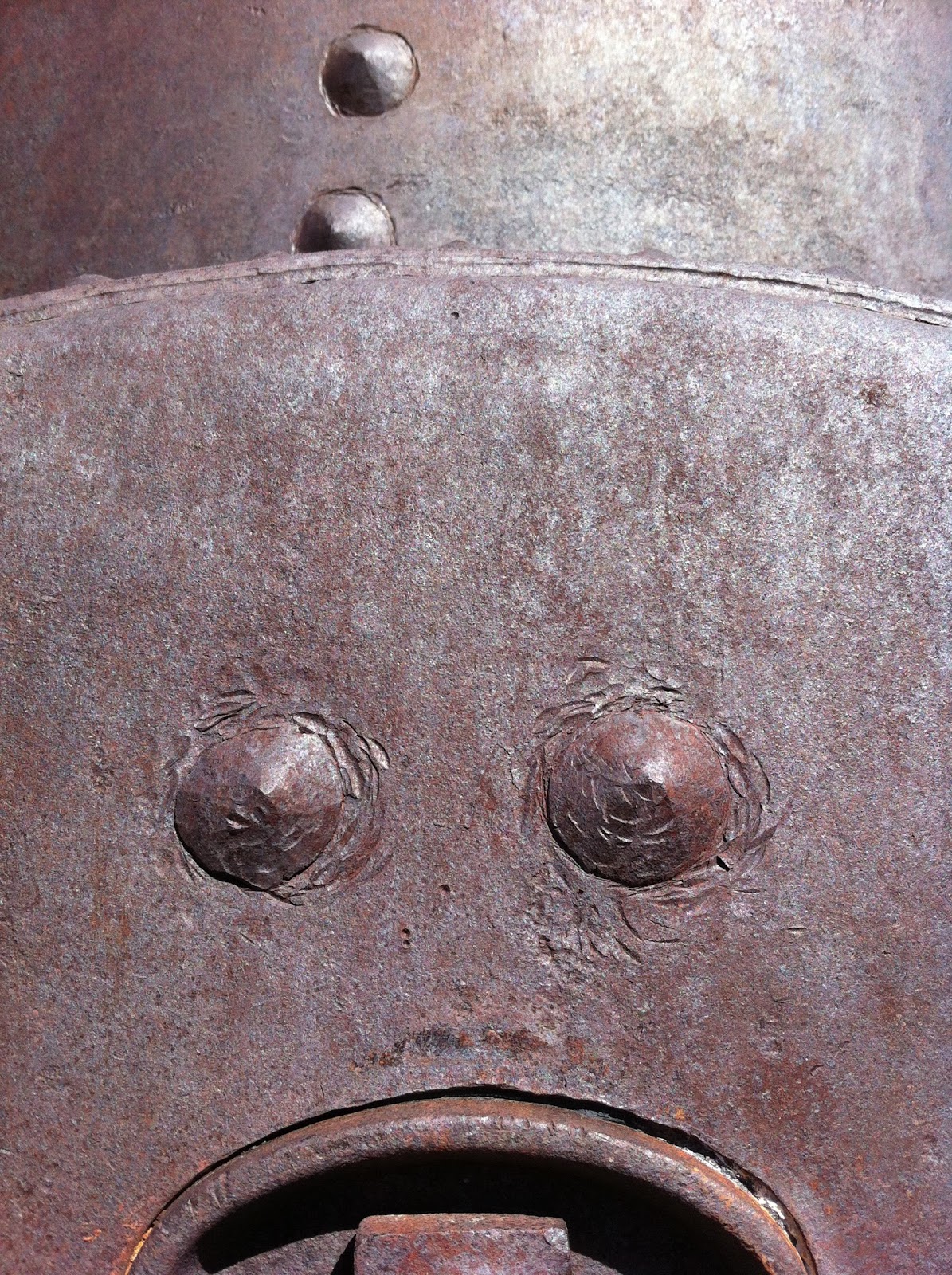 and trying to identify all the bits. Eventually we realised it was nearly 1130, time to leave.
I hesitate to confess the next bit, but it is part of the story …
I'd brought my favourite trainers on this trip. They'd pounded the London pavements for many miles, seen many parts of Scotland, they'd carried me to almost all the SOARs (Spin-Off Autumn Retreats) I'd attended. I walked around Sunriver in them every morning in 2009 and in 2012 they were blackened by volcanic ash at 8000' in the Sierra Nevada, then (with extra thick wool socks) washed clean in the early snows at Tahoe. They were very old now, soles wearing through. I'd bought replacements in San Francisco and wore the new shoes in Yosemite and Death Valley, but I'd been unable to bring myself to just dump the old ones unceremoniously in a bin. I could have buried them somewhere, leaving a memorial to puzzle future archaeologists (Ritual! Clearly Ritual!), but that seemed like pollution. Sitting in the car waiting for A., it occurred to me that this was the place, it was somehow fitting to leave them and the memories here, in a ghost town. Whispering apologies to the Park Service who will have had to truck them out of the park, I took the battered shoes out of the suitcase and, (sad but true) with tears in my eyes, said farewell and placed them carefully in the bin. End of an era.

And then we drove back down the road. 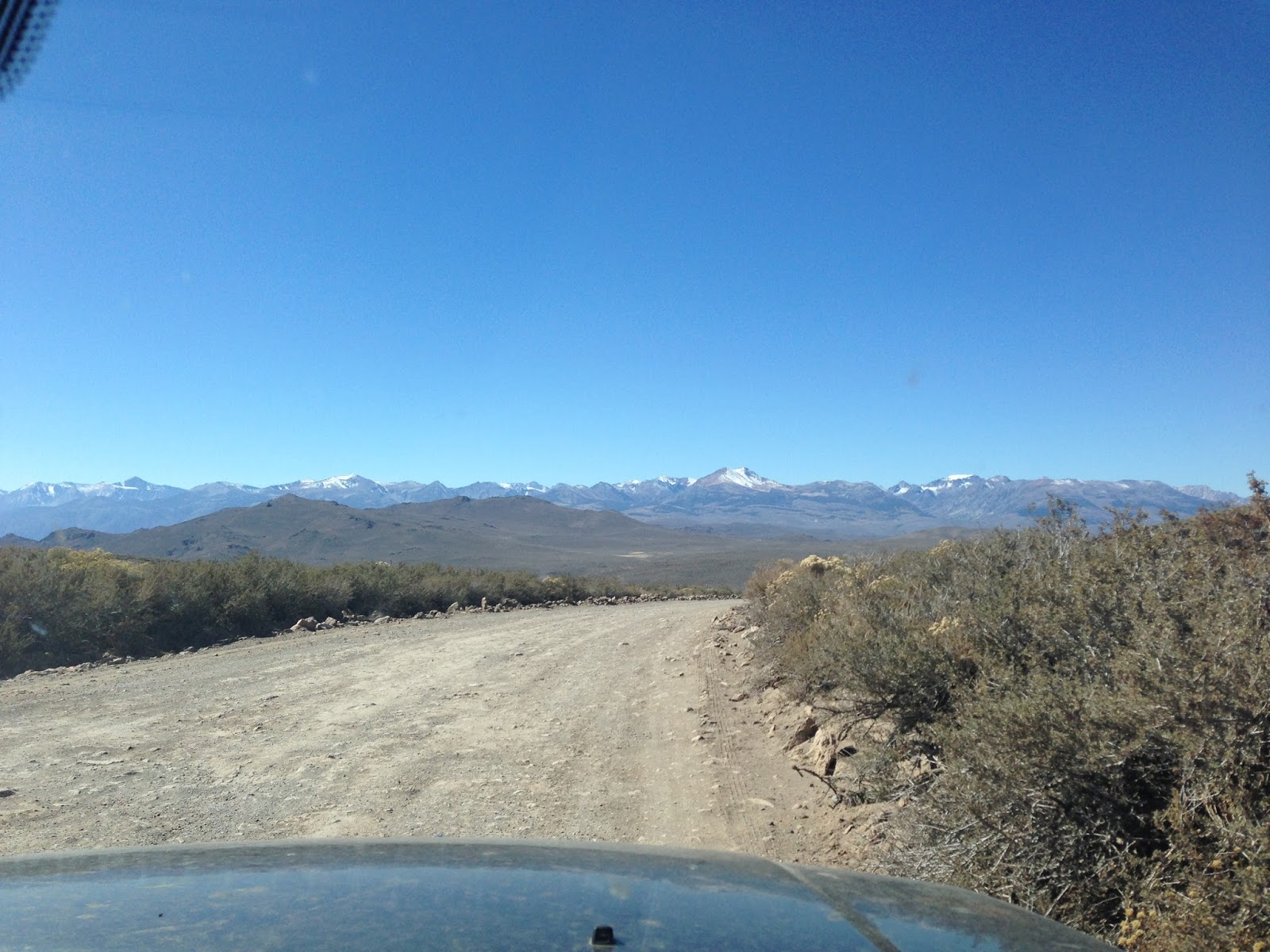 There is a spectacular view of the Sierra Nevada from the highest point of the road.

Lower down there are some patches of grazeable greenery near the road. 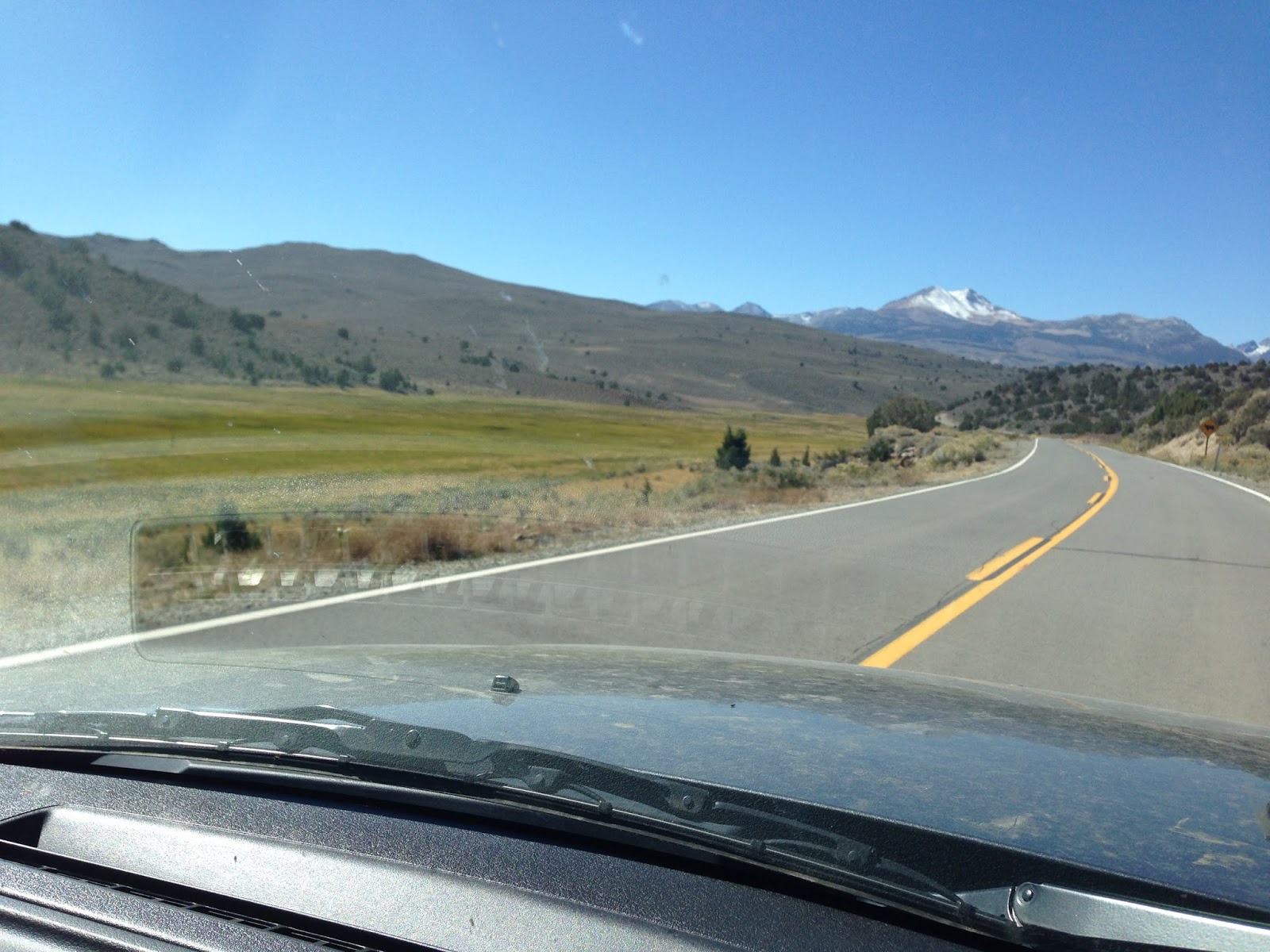 There were sheep, and (look closely) 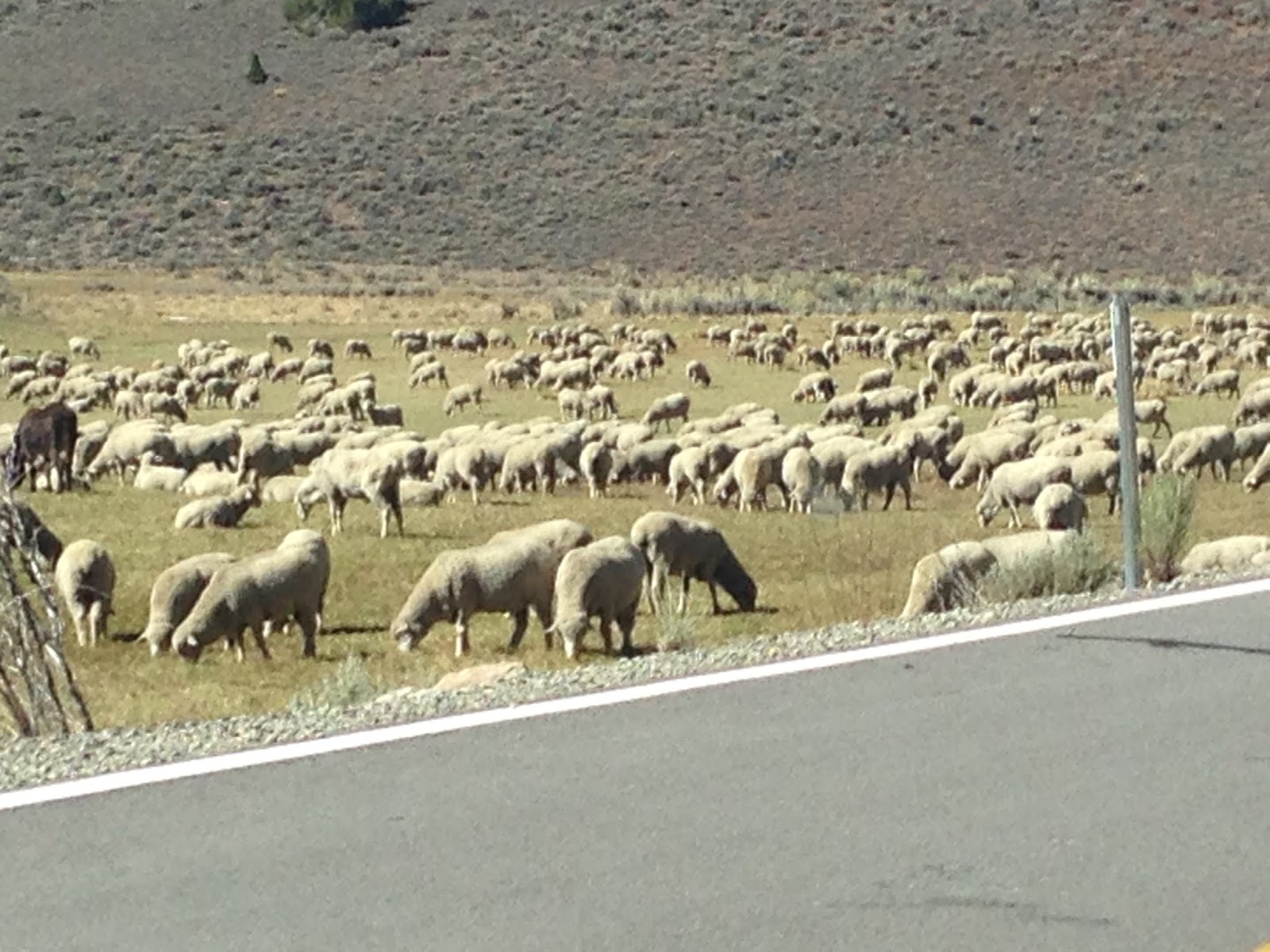 A donkey. We speculated on the reason for a donkey. You can, too.
And then we reached 395 and we drove, or rather I drove, and A. navigated, which means far fewer photos. In fact I am somewhat horrified to discover, none. I was certain I'd taken some where we stopped for lunch on the roadside  but I can't find them in iPhoto, which leaves me wondering whether the gnome was on strike for some reason.  I can show you where we stopped (wait for it :-)

At Carson City we turned left onto 'Nevada State Route 431', aka Mount Rose Highway. This is one of the best routes to admire the steep east slope of the Sierra Nevada - it hairpins straight up from the basin floor at Carson City to Mount Rose summit, at 8900'. There are some stunning views from the road, and we had ample time to enjoy them in the traffic queuing for one-way flow due to re-surfacing work.
And then we were queuing through Incline Village and Kings Beach, deciding that no matter how lovely the houses, we weren't buying anything on a slope that steep in an earthquake zone. West on 80 and we're going down, down, down the seemingly endless gentle western slope of the Sierra. We turned north on 174, headed for a good friend's house which was exactly where it was supposed to be, although the road to get there was, um, interesting. If you've been there, you know exactly what I mean. I did a lot of talking to the car toward the end of the trip, and pointed out to myself that the bridge was absolutely no different to a vehicle inspection ramp and I take pride in driving my own car onto those. A. was vastly amused. Either he talks to himself silently or he doesn't have to talk himself into things at all.

Flowing downhill on the western slope of the Sierra Nevada felt like what it was: saying farewell to the mountains. I generally like travelling west; west and north are the 'good' directions, the ones that promise adventure, but we were all too aware that our time here was running out. Although we'd encounter some more unexpected adventures before it ended …