It's hard to believe that a week ago (as I type, not necessarily as I publish), we were in San Francisco airport waiting for the flight to bring us back to the UK. For only the first or perhaps the second time in our travels together, neither of us wanted to get on that plane. This was the best, – or one of the best – holidays we've ever had. And this was one of the best days, so full of wonders that I've split it into two posts.

We had been planning our full day in Death Valley since the holiday schedule had been finalised, so we set the alarm for 6:30 (it is a holiday, after all). Perhaps it was the sense of excitement that woke us even earlier, like children at Christmas. We got up, dressed (we could hear a lawnmower outside our ground-floor window) and threw open the curtain to see emerald green grass and trees glittering under yet another perfectly cloudless blue sky. And a pair of someone's underpants curled limply on the grass a couple of meters beyond our door. The dust and scattered rain of the previous evening had been born on strong, warm winds; we'd done our usual wash of underwear and socks when showering before dinner, and had put them outside on our deckchairs to dry, but we'd rounded them up from where the wind had scattered them when we returned from dinner. Clearly somone else's had escaped!

Our Senior Discount Plan at the Ranch didn't include breakfast, so we ate slices of Schat's Energy bread, dried nectarines from Frog Hollow in the Ferry Building in San Francisco, and drank (or, in my case, failed to drink) some of the nastiest drip coffee I've ever encountered, while watching someone mow the golf course. We were in t-shirts and shorts enjoying what amounted to a lovely British summer afternoon (at 7am), while he was wearing shorts, a hoodie with the hood up, and a quilted vest, and still managed to look cold. When the lawn mower puttered away into silence a group of about nine coyotes skulked across the grass from one group of trees to another. Time to fill our hydration packs, assemble sunblock, hats, long-sleeved shirts and lunch (energy bread, jerky and apricots), load the iPad with digital topo map (and additional battery storage good for several days of use), and head for Mosaic Canyon. I'd suggested this because it is supposed to be the most beautiful and most interesting of the Death Valley canyons accessible to someone driving a rental vehicle. 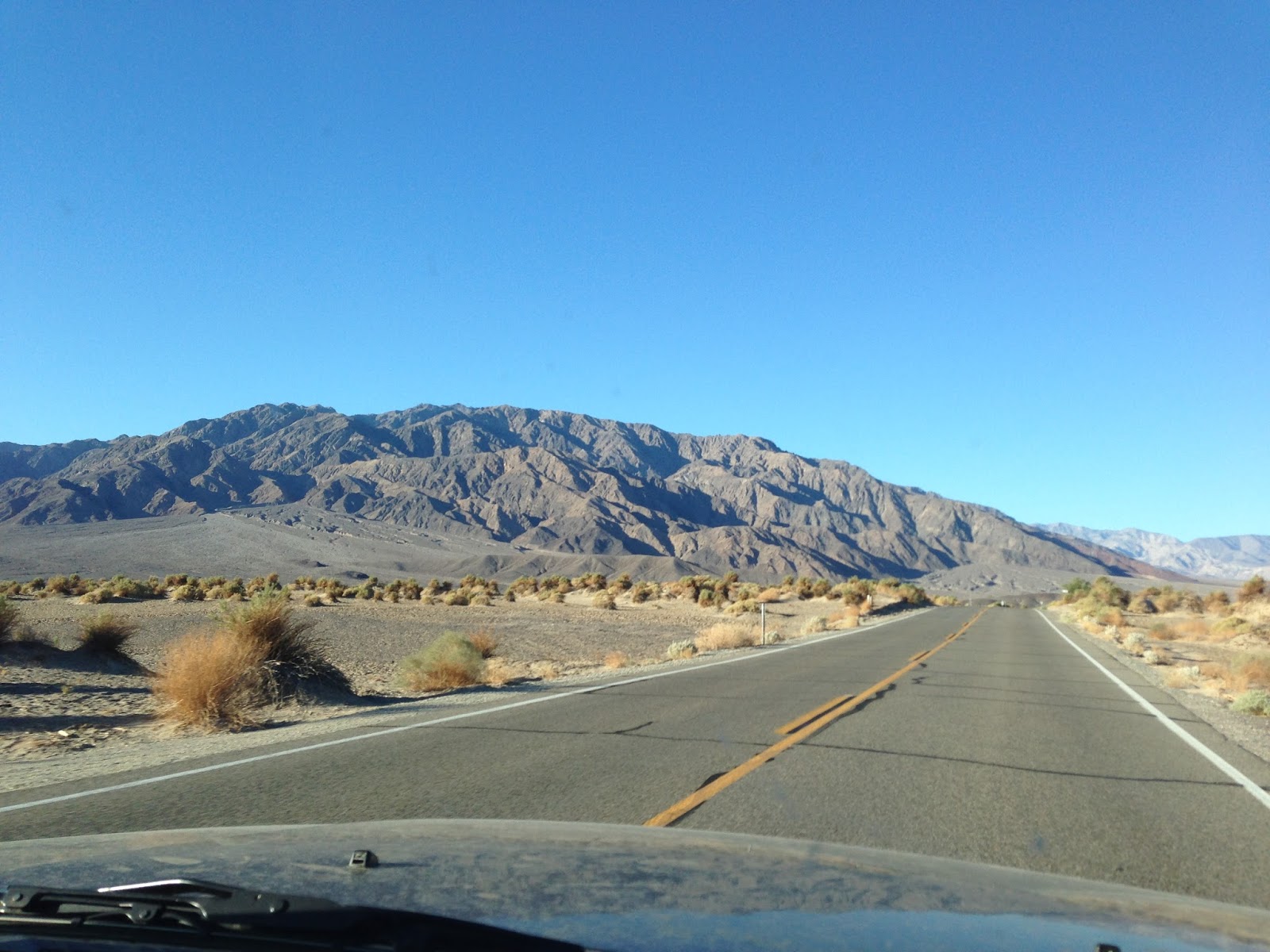 On the road to Stovepipe Wells and Mosaic Canyon.

By 9am I'd rooster-tailed it up the washboard road to the canyon (it's a long, long time since I looked back and saw pale dust billowing in my wake) and we were donning our packs. And hats: the sun was already more than warm on our skin. 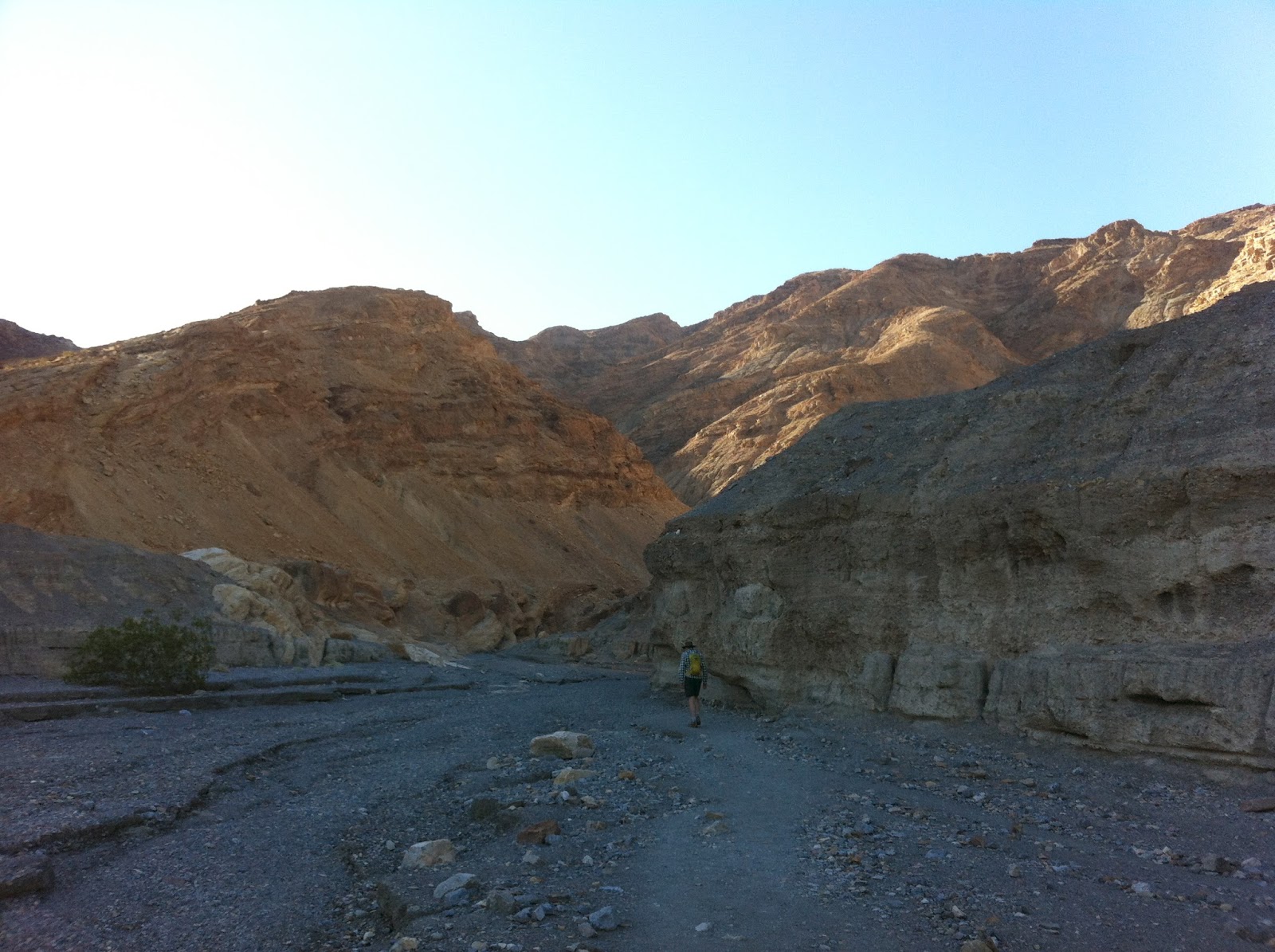 There's him at the entrance to the canyon…

Note the multiple layers of sediment that have flowed out of the canyon at different times. Each is the result of a catastrophic rainstorm scouring the canyon clear of anything that can be moved. Over time the newly-laid layers solidify, cemented by naturally-occurring carbonates (basically lime) in the sediments. Later flows may cut down through them or flow over them, depending on timing and energy levels. 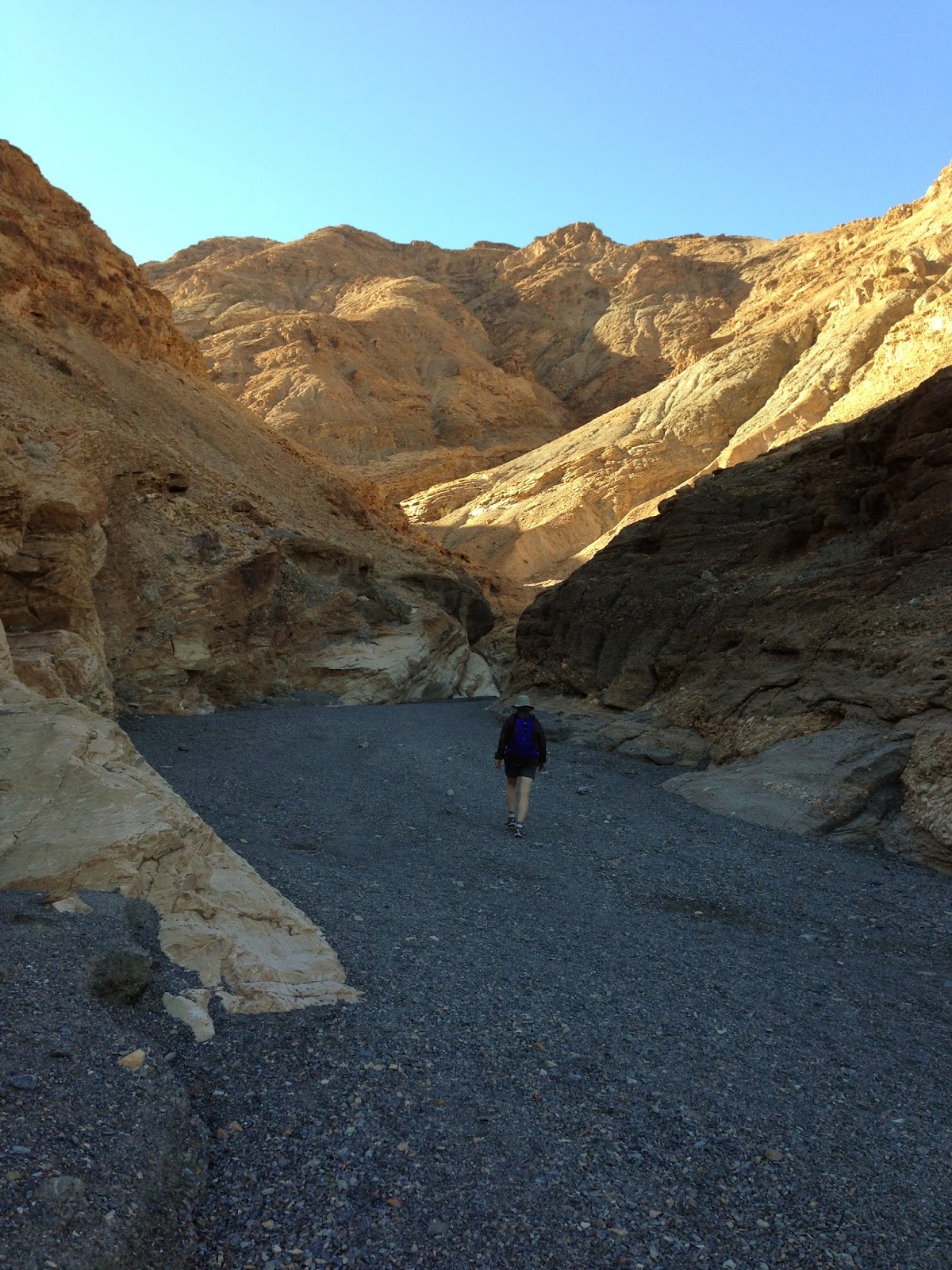 And here's me, a little further in. 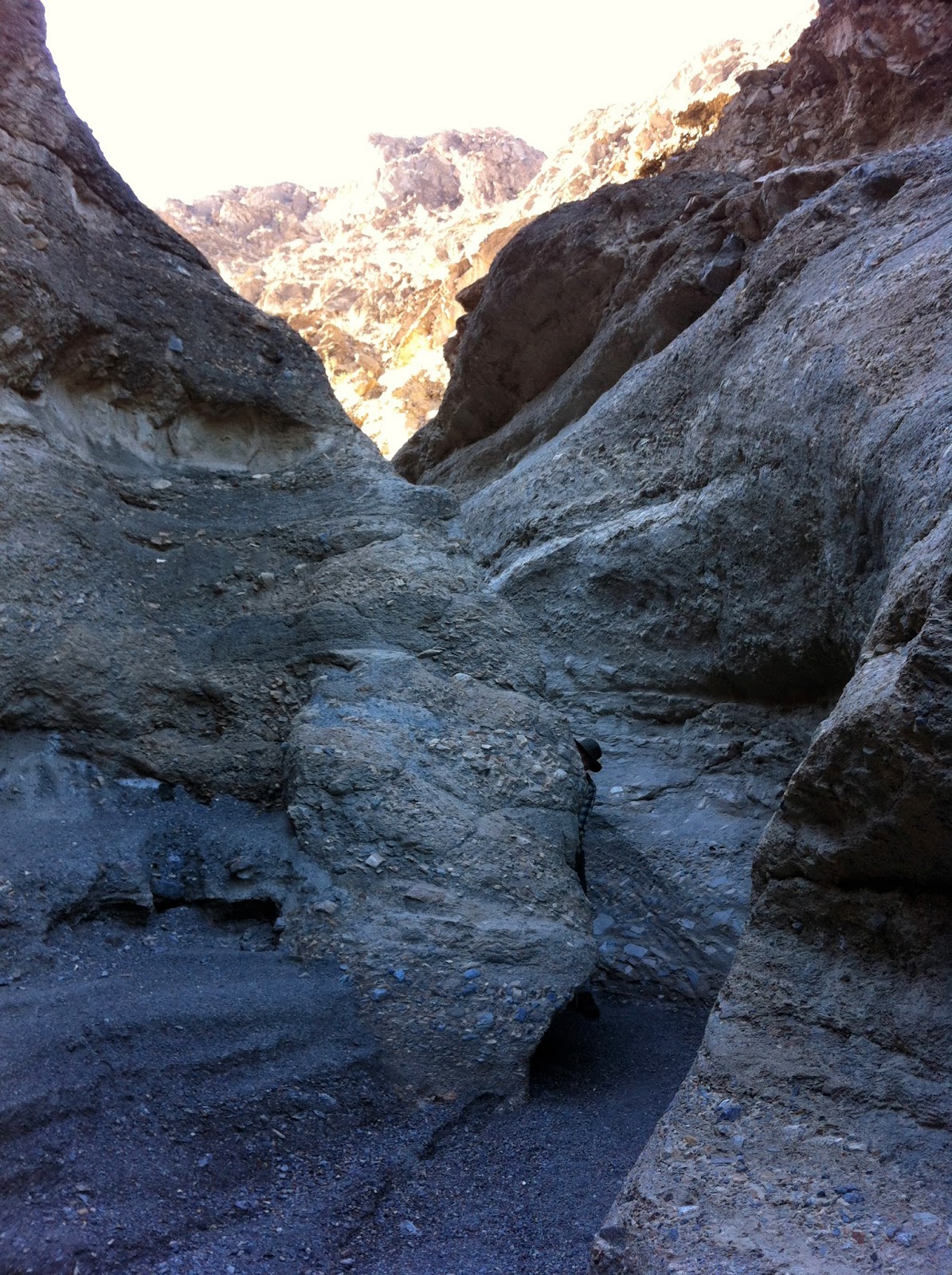 The hat is photo-shy

The canyon follows the line of a fault, where the rocks are weakened and broken by earth movements. As the canyon narrowed, we could see that layers of sediment - different deposits can be identified, each from a different event - rose higher up the walls, but a channel always remains where water laden with sediment has cut through the layers. I've read and re-read Craig Child's The Secret Knowledge of Water, so I have some understanding of how these layers were deposited even if I've never seen a debris flow, the sudden flood of water laden with sediment of all sizes that churned through these narrows. It's slightly chilling to see the evidence of violence preserved thus, so elegant, so peaceful in the shade of a hot - and thankfully cloudless - desert morning. 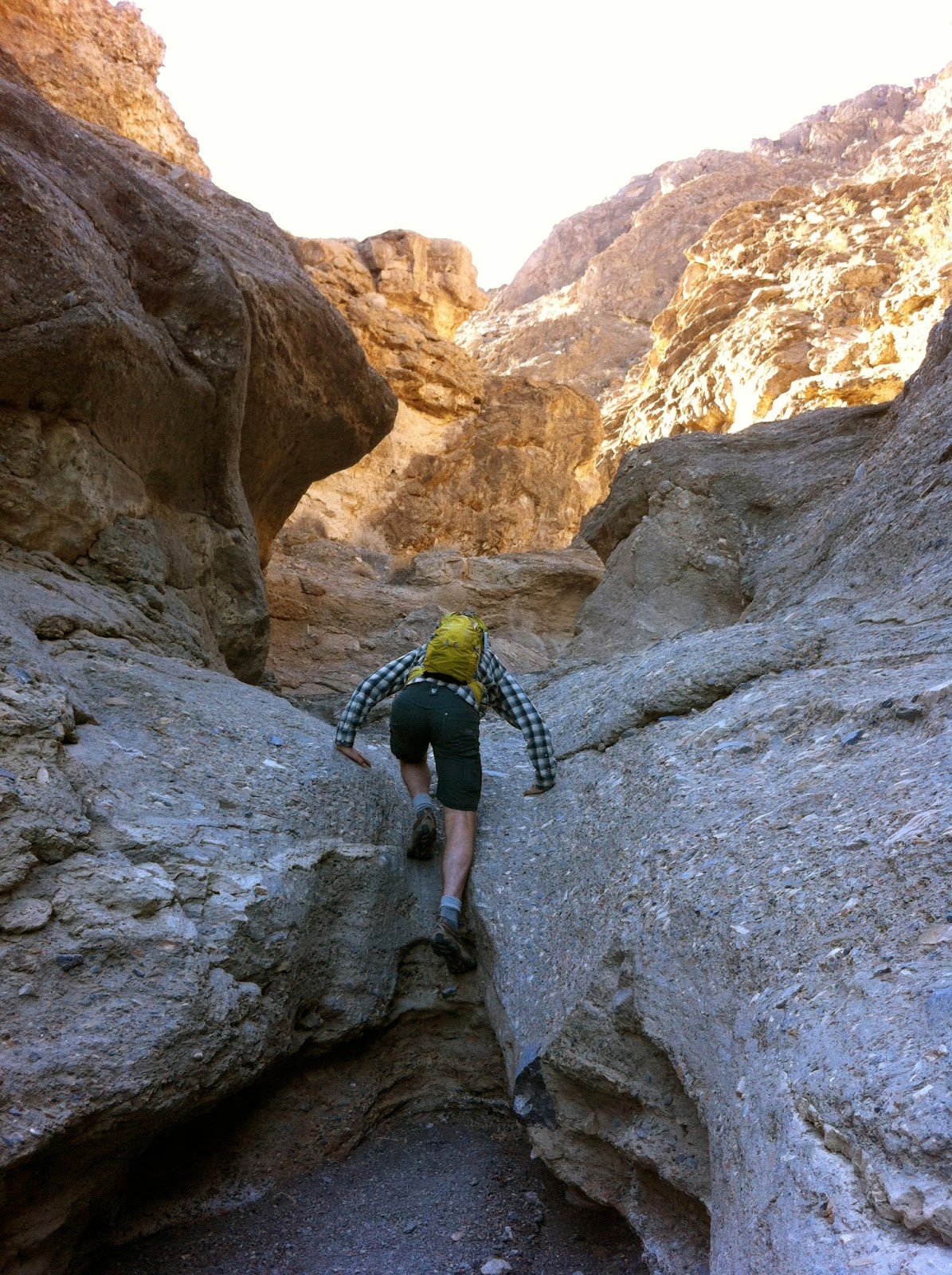 As we scrambled up through the narrows, I tried not to think about what it might be like to do this over slippery rock with wet fingers, racing against time as a trickle of water on the canyon floor becomes a stream of muddy water, then a churning rumbling roaring river of all the stuff we're climbing over. 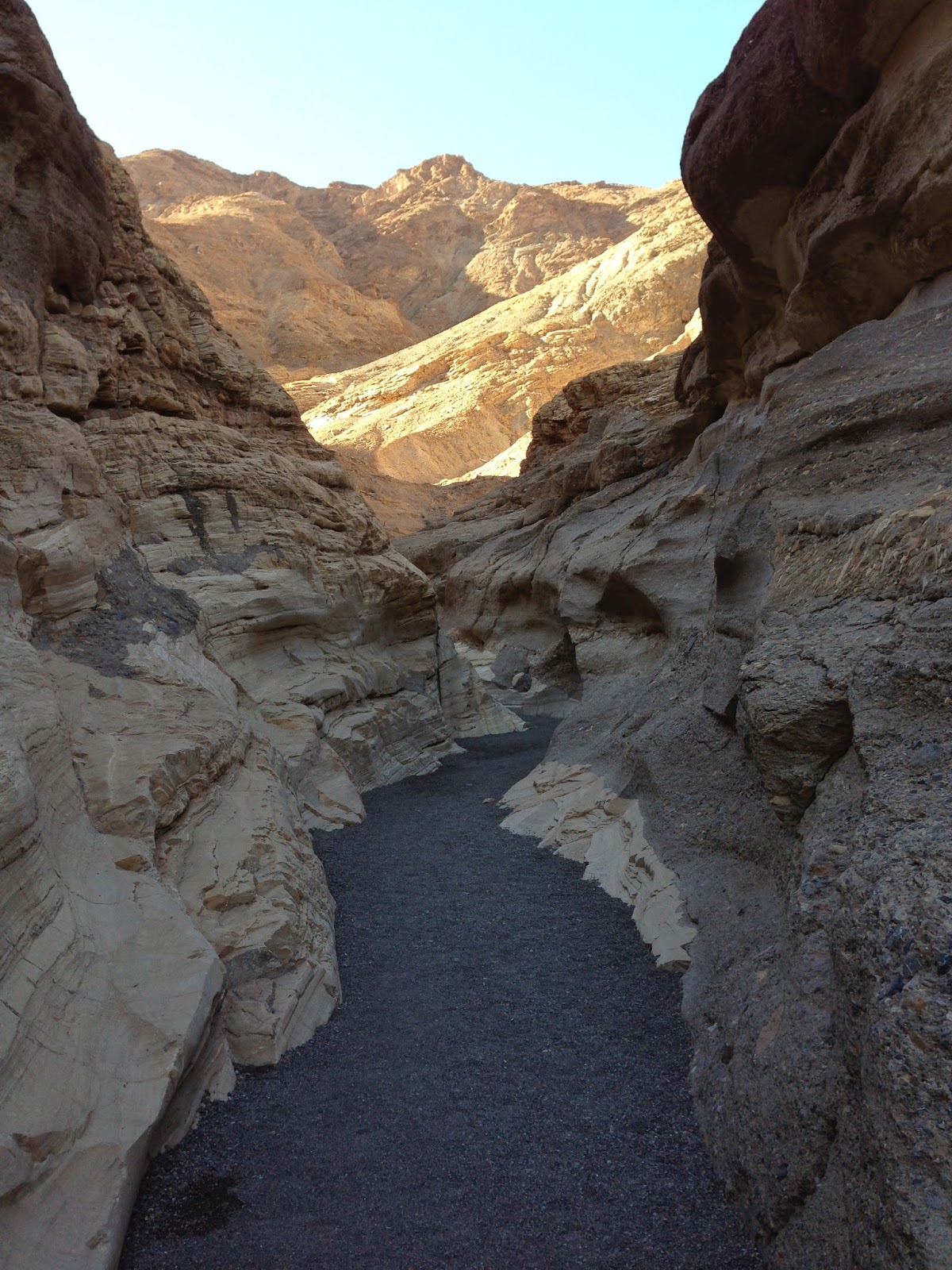 Look closely at the hardened sediment in the lower righthand corner of this shot to see why this is called 'Mosaic Canyon': water loaded with sediment has polished the cemented remains of earlier floods until they resemble stones inlaid in cement. Smooth to the touch and very, very beautiful.

Further upstream most of the old sediment has been eroded by subsequent floods, exposing a beautiful warm cream rock polished smooth by water and sediment. I ran my hands over it thinking 'marble?' And it is, a dolomite. There are patches of breccia, fragments of the dolomite embedded in a darker sand matrix, evidence of still earlier debris flows. 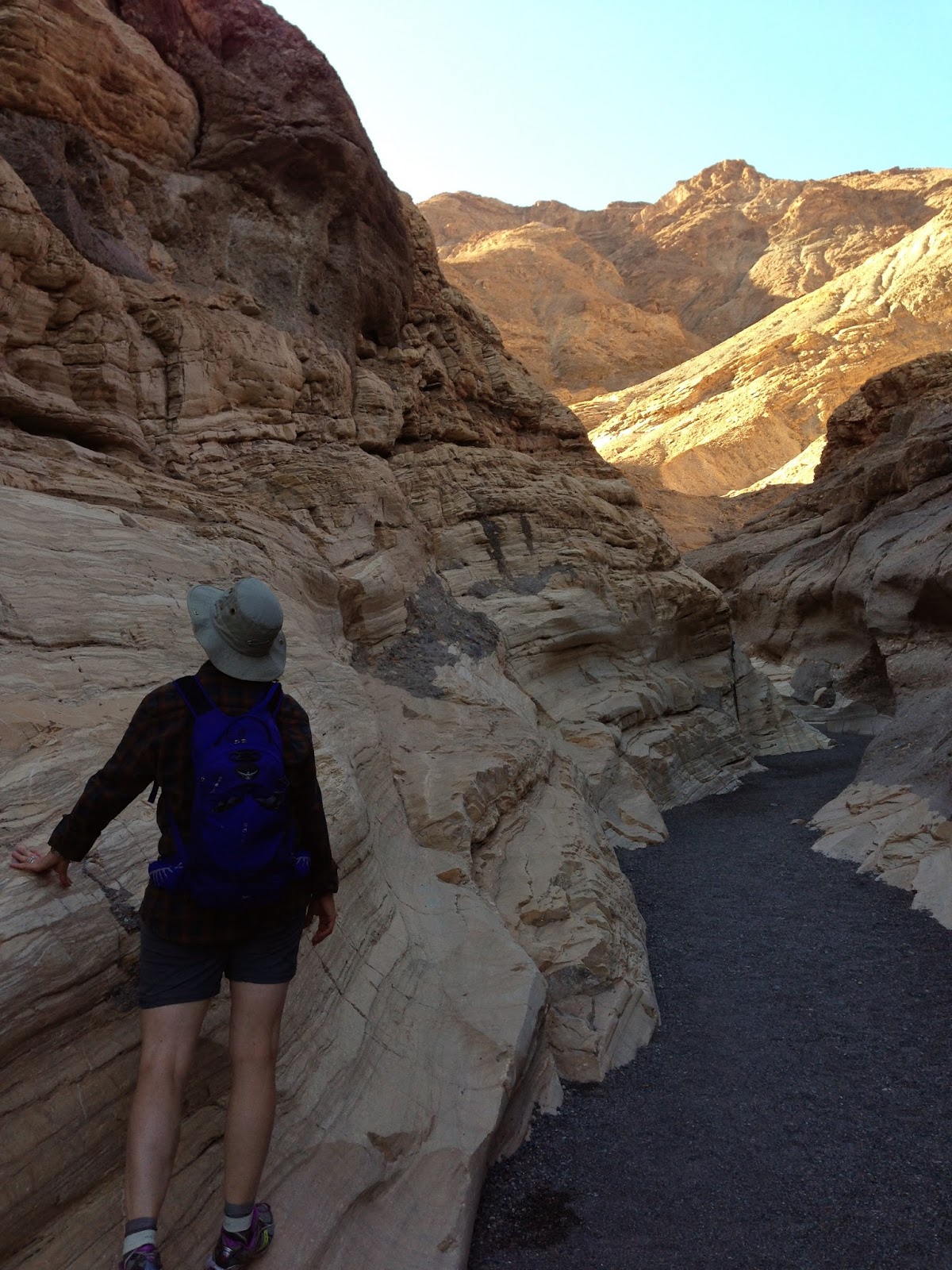 I was so excited I forgot to take a detailed photo: look online, other people were more organised!

Upstream the canyon opens wide to the sky and the sediment lies in thinner, flatter layers. It was about here that we realised we could hear voices; we were no longer alone with the sun. 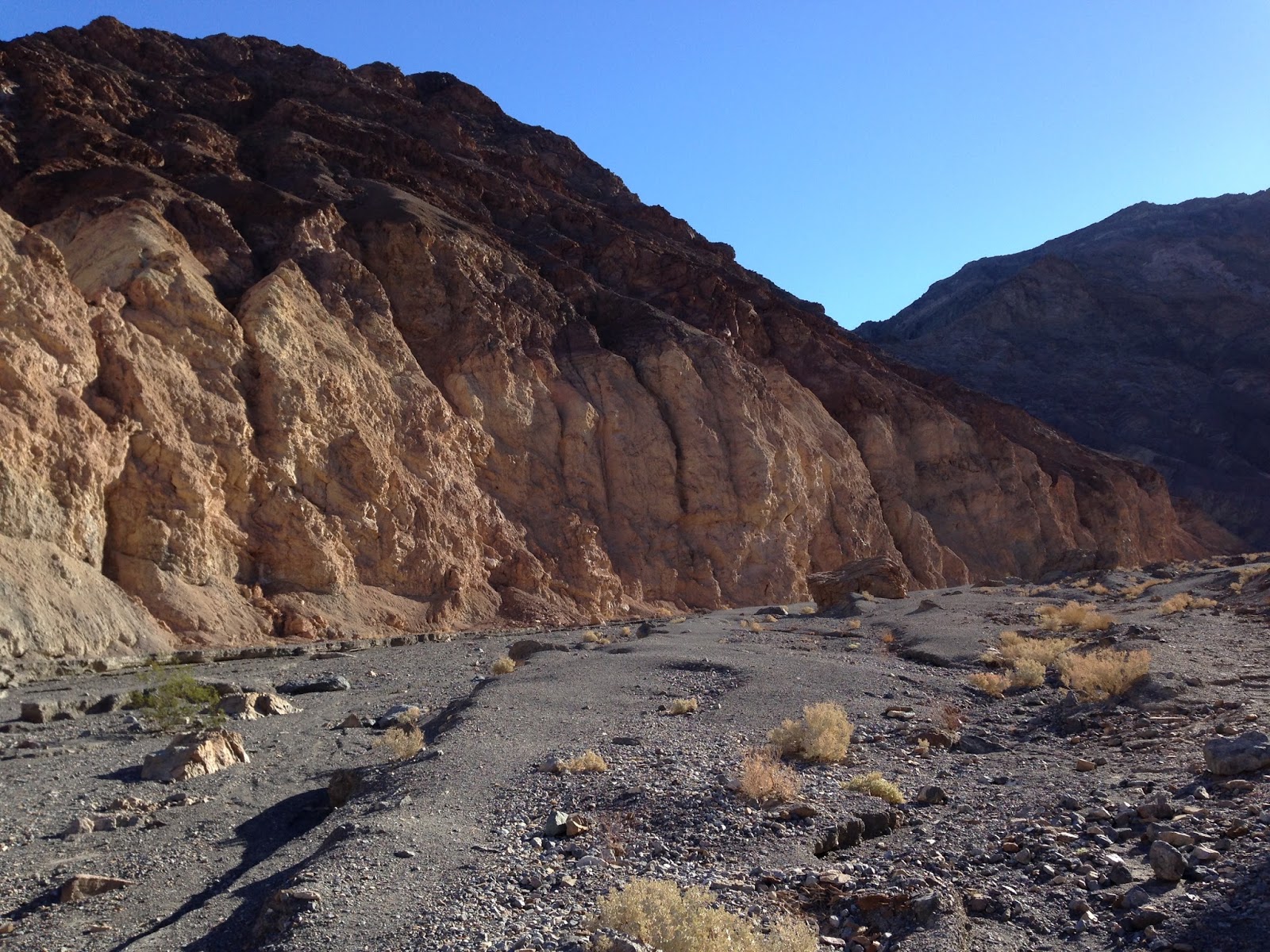 And then it narrows again, to a point where we had to scramble over the boulders blocking the channel. The voices caught up with us, two German lads touring all the main US national parks in 6 weeks. We offered to let them past, but they refused, saying they were happier following us because "we looked like professionals". Good heavens. We moved deeper into the canyon together, and I was pleased to see each had a gallon jug of water in his pack.

The canyon widens a bit, then narrows to a high blockage. We backtracked a bit and found a scramble up that allowed us past it. There were fewer footprints in the gravel after that. After another scramble or two, we investigated a small dead-end canyon where we found evidence of large rodent activity (but not so large as to be ROUS). I was really hoping for a packrat, and a 'midden' preserved by crystallised urine, but I think it was some kind of kangaroo rat. Which is itself fairly amazing, as they're so well-adapted to the desert that they never need to drink water.

Around the corner was The End, or at least a fall that we were unwilling to attempt to pass. 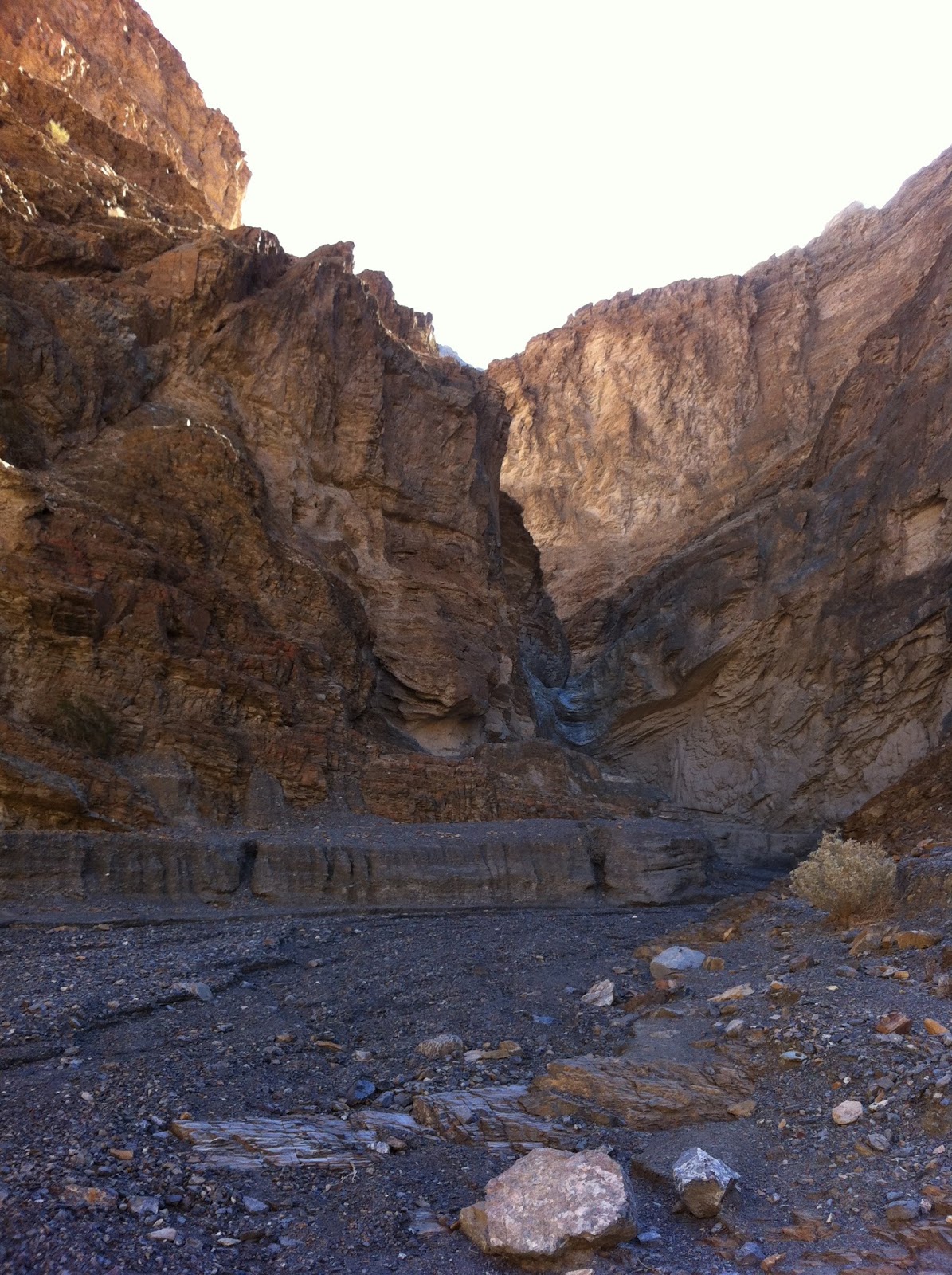 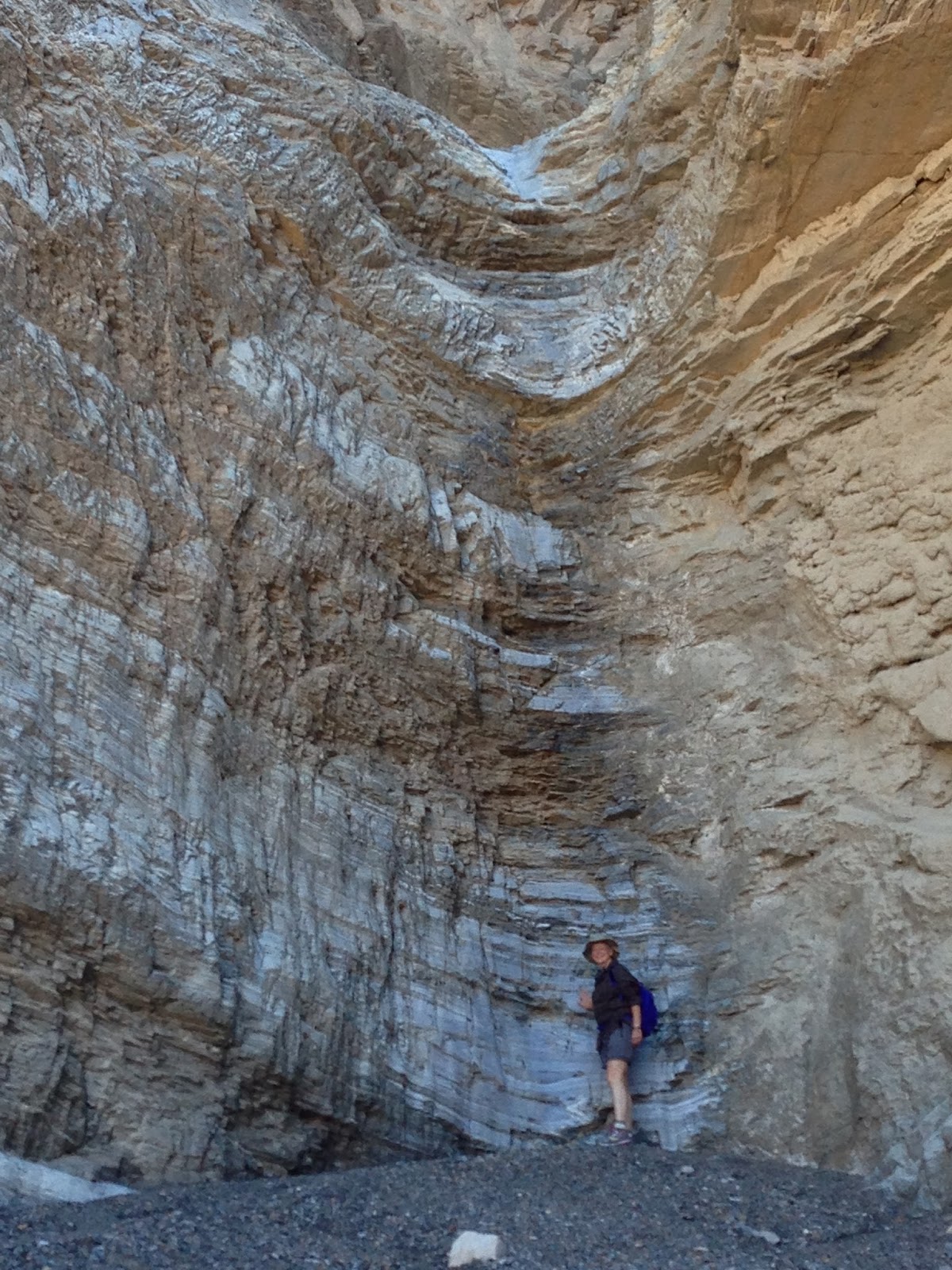 This was fabulous. To one side the stone is clear grey, polished by water and sediment. To the other it was covered by a thick coat of flowstone, lime deposited by the spray of the fall. 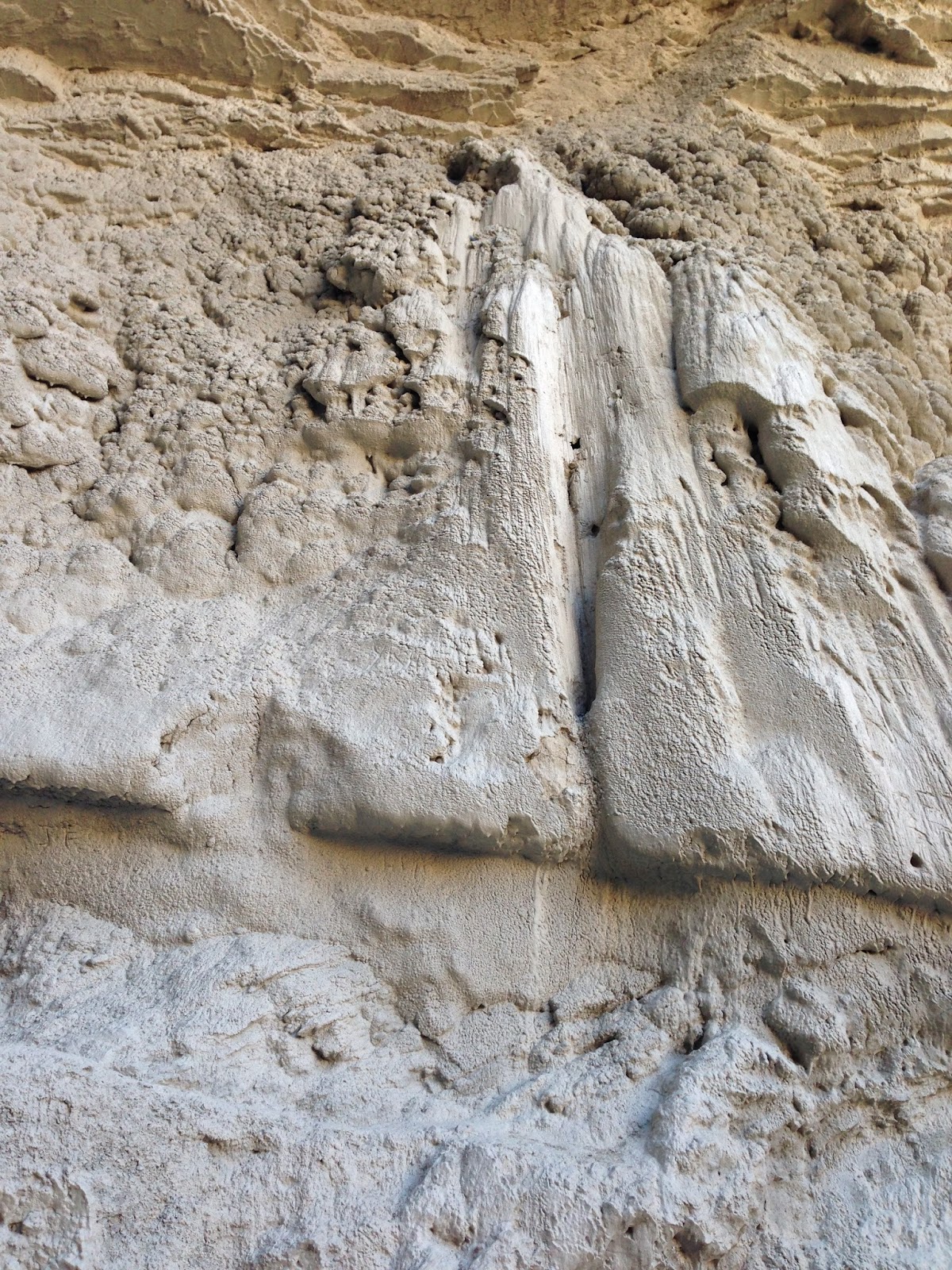 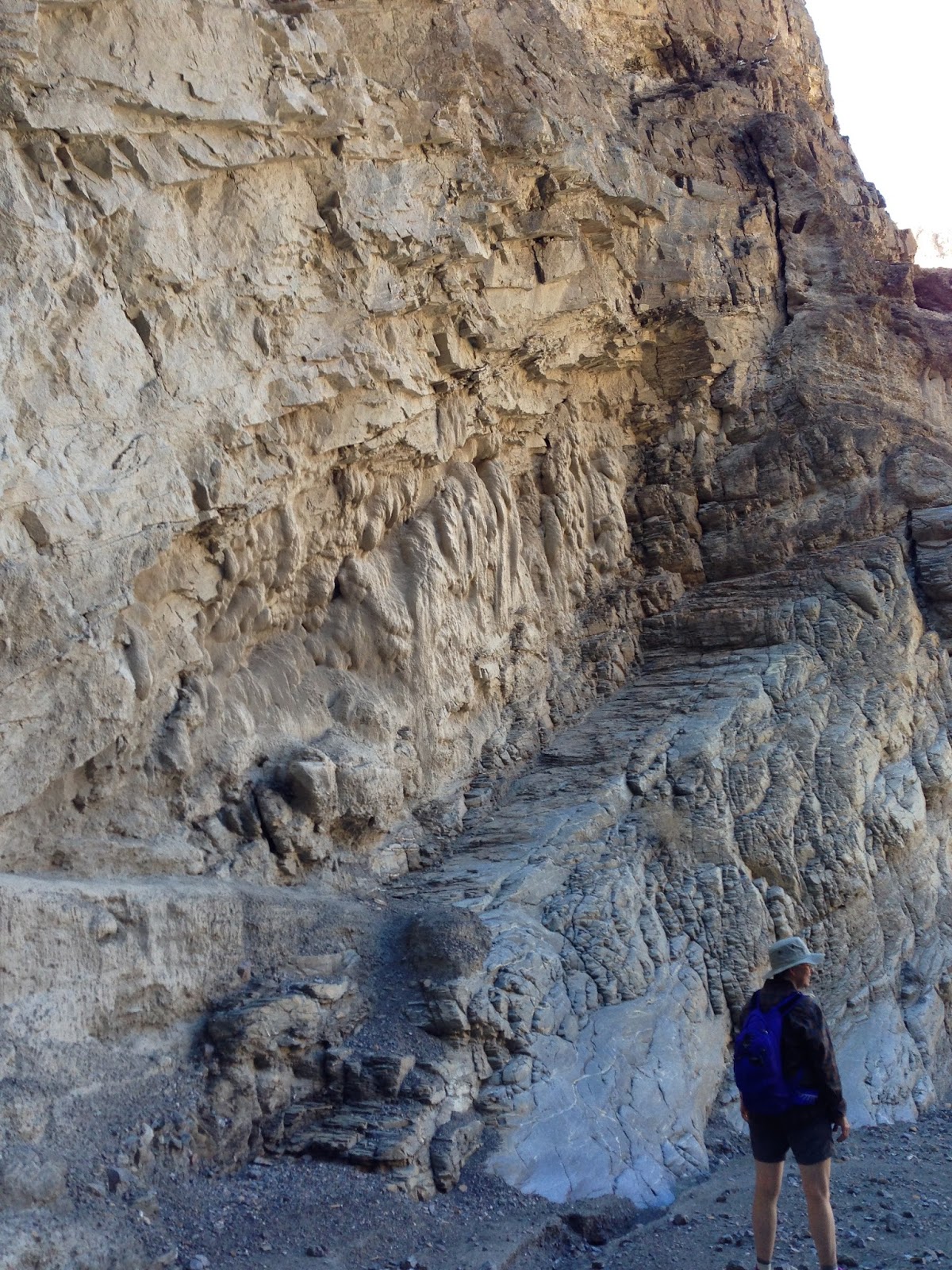 It's clear from the size of the deposit that tremendous volumes of water have erupted from that fall many times in the past. We all looked for a route up and past the fall; there were a couple that I might have tried in different circumstances, but nothing clear and obvious, so we headed back. 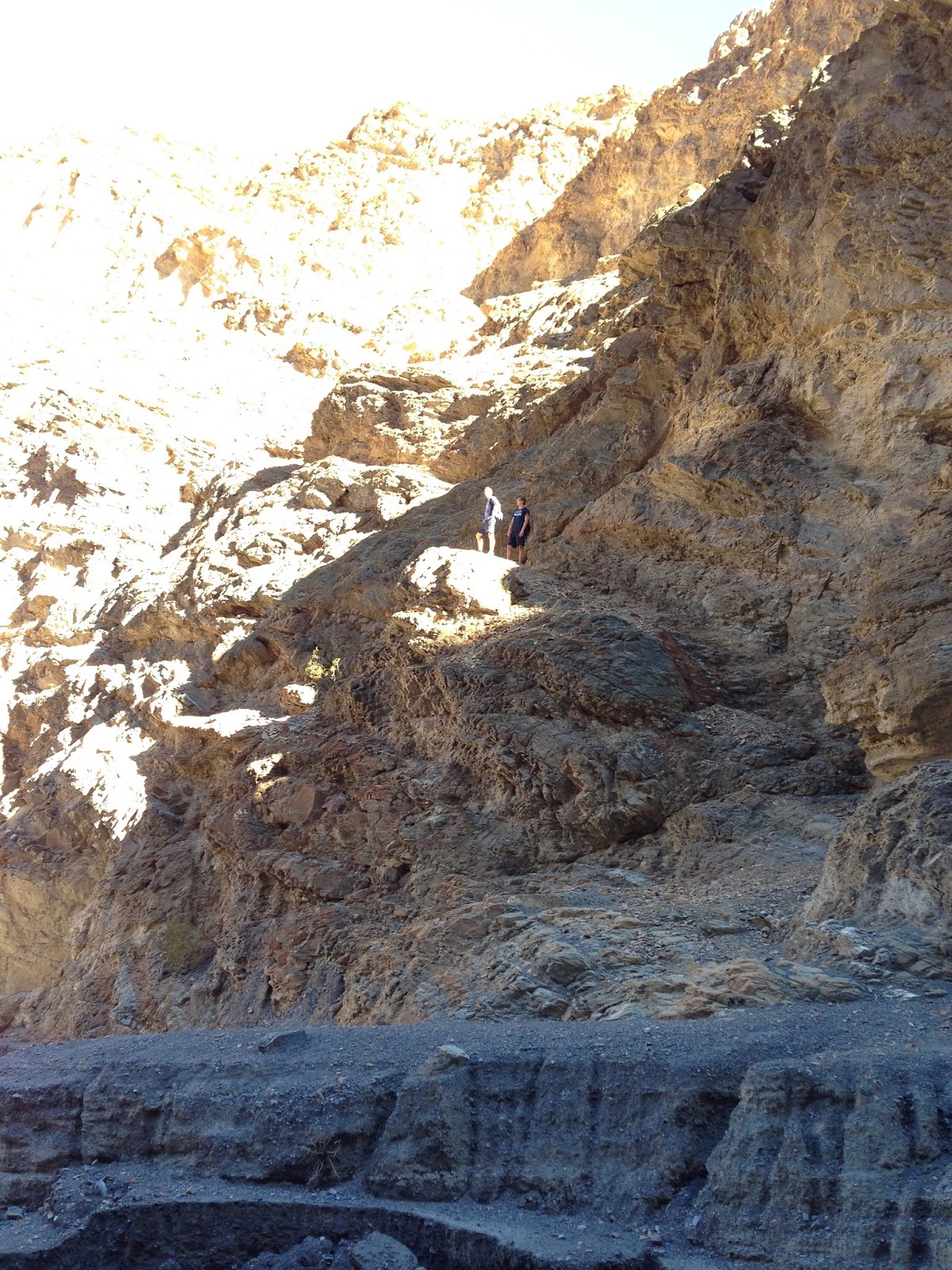 Our two German friends explore a possible route around the fall.

The sun was hotter and higher, reaching more of the floor of the canyon.  I was interested to note that we all tended to walk in the shade when we could. On the first flat we began to encounter other walkers, the first being a chap in shorts and t-shirt, no pack or hat, striding fast up the canyon carrying what looked like an old Hasselblad or Leica camera. 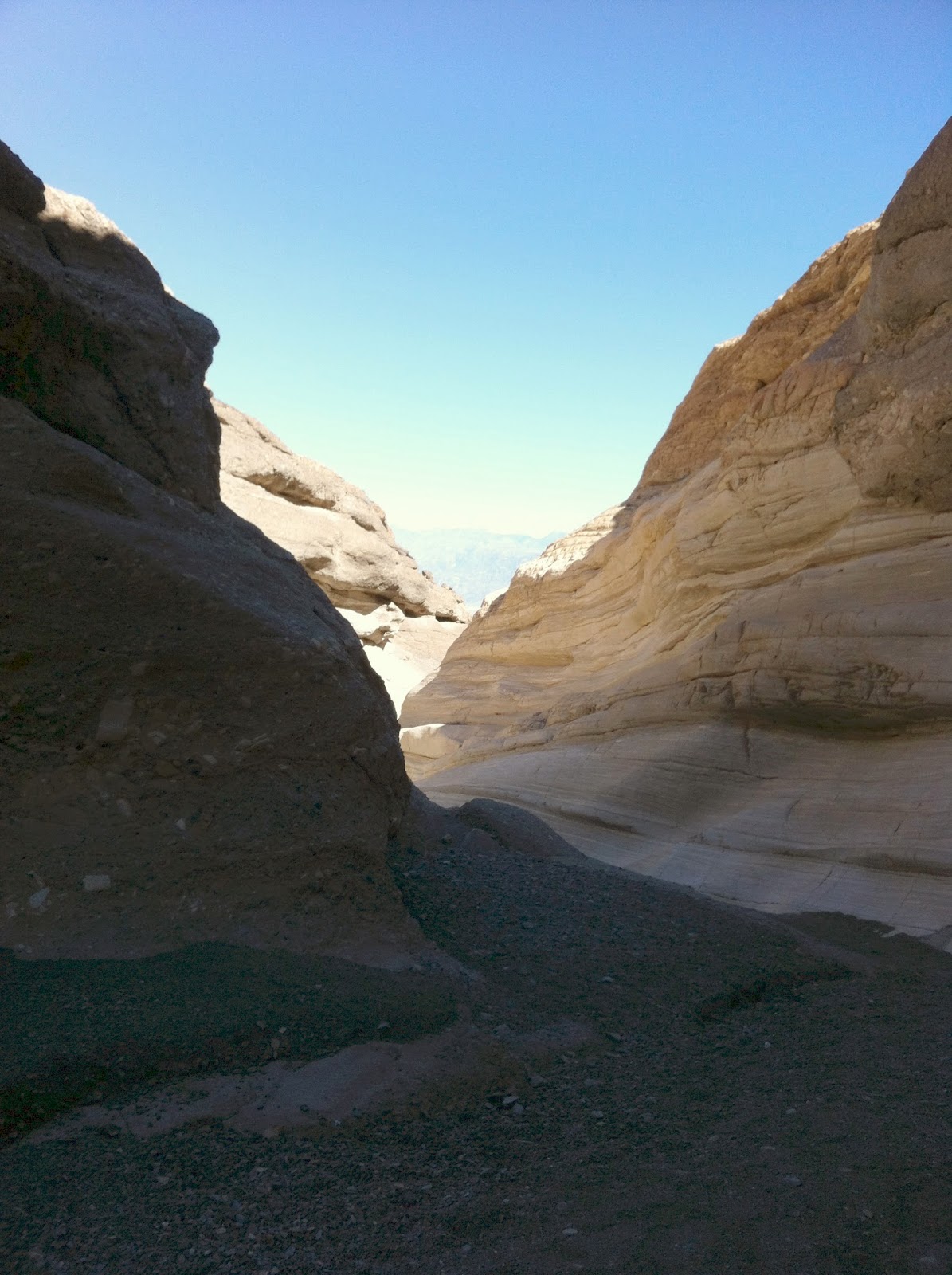 The dolomite virtually glows in the white sunlight.

We paused near the canyon mouth to share some beef jerky (salt is good) and say farewell to the German lads. More and more people were trudging up the gravel in the sun, looking less than keen and very hot. 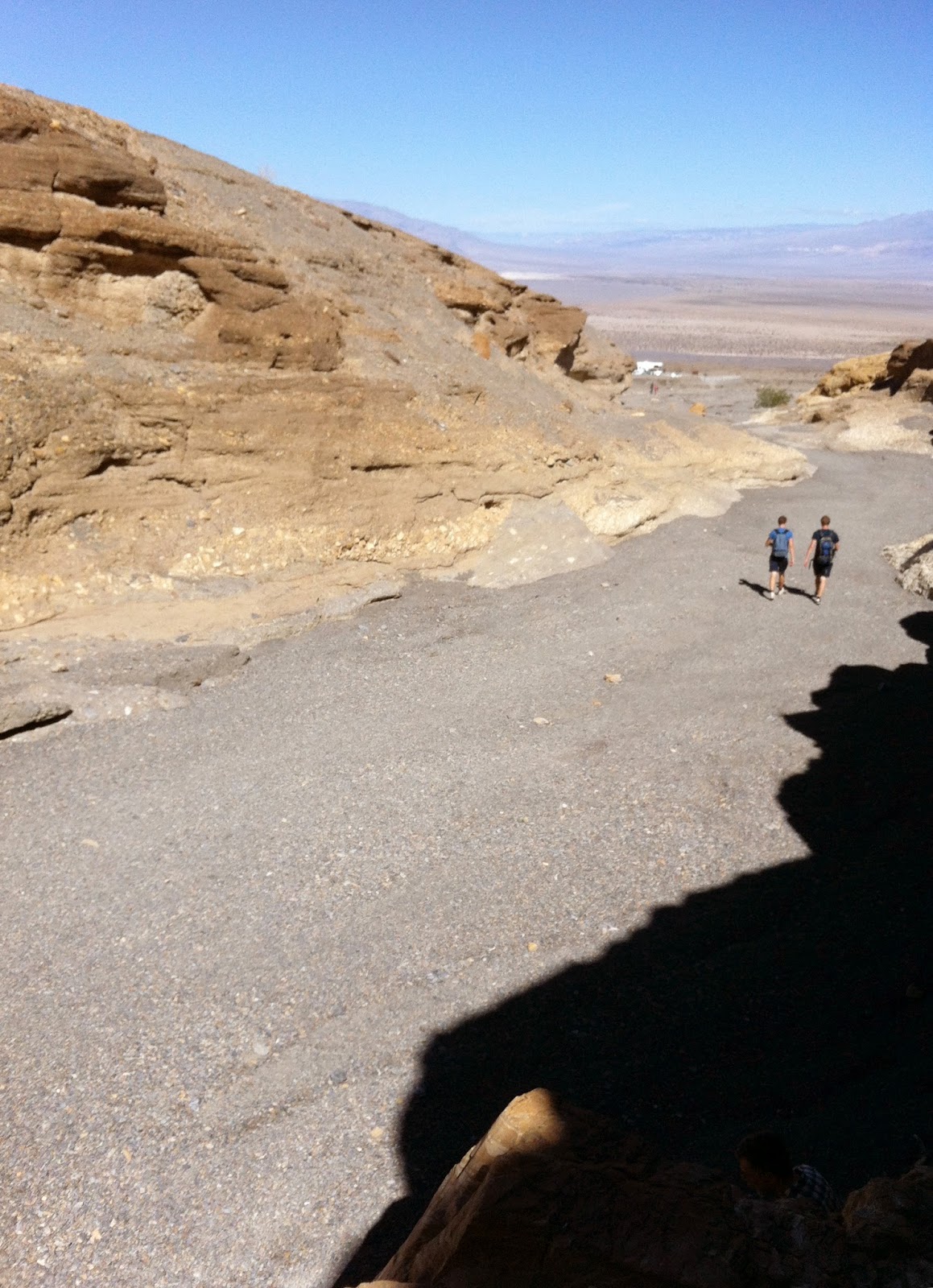 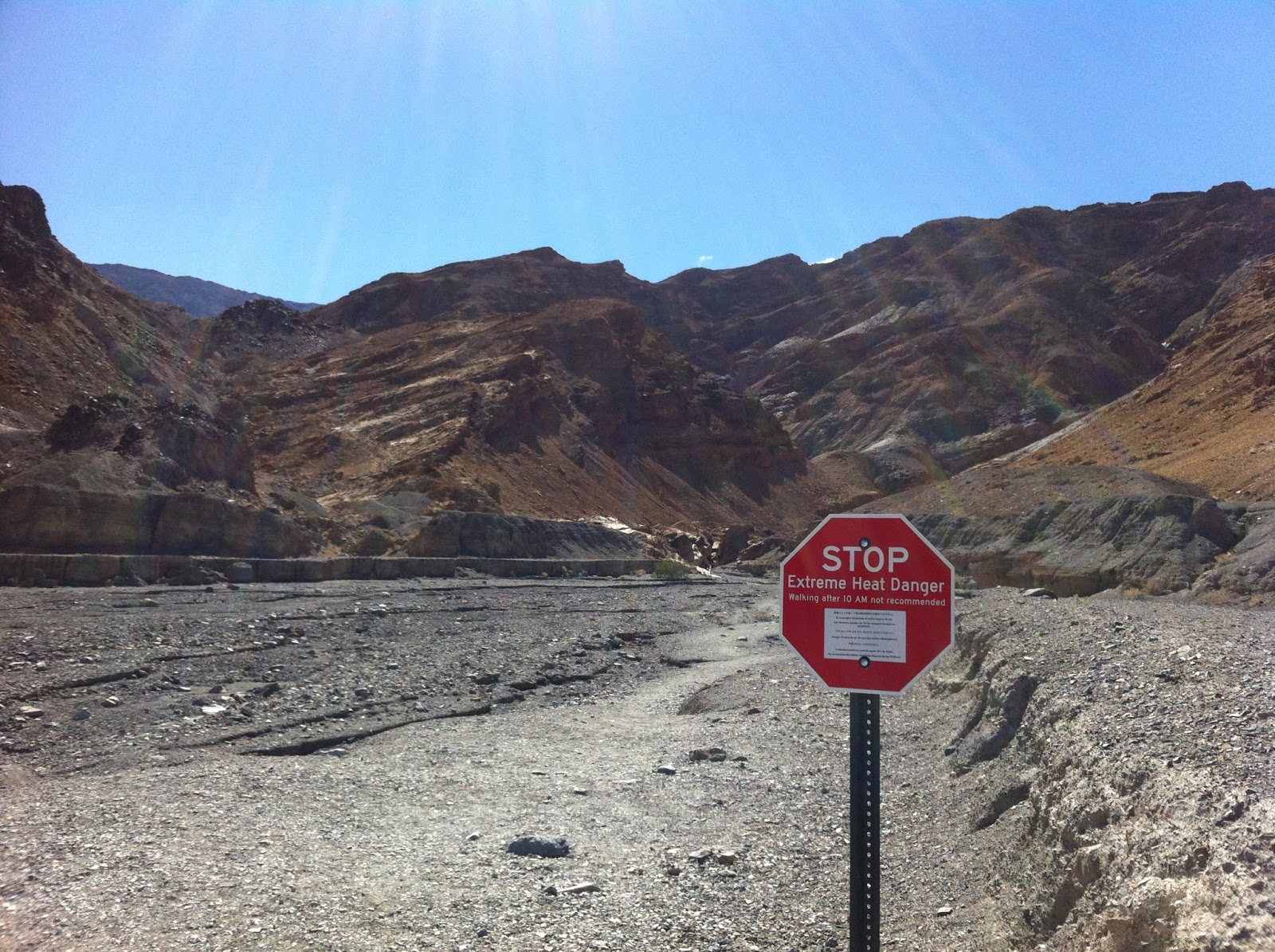 We headed back down the road to the Mesquite Flat Sand Dunes, the first desert dunes I've ever seen. 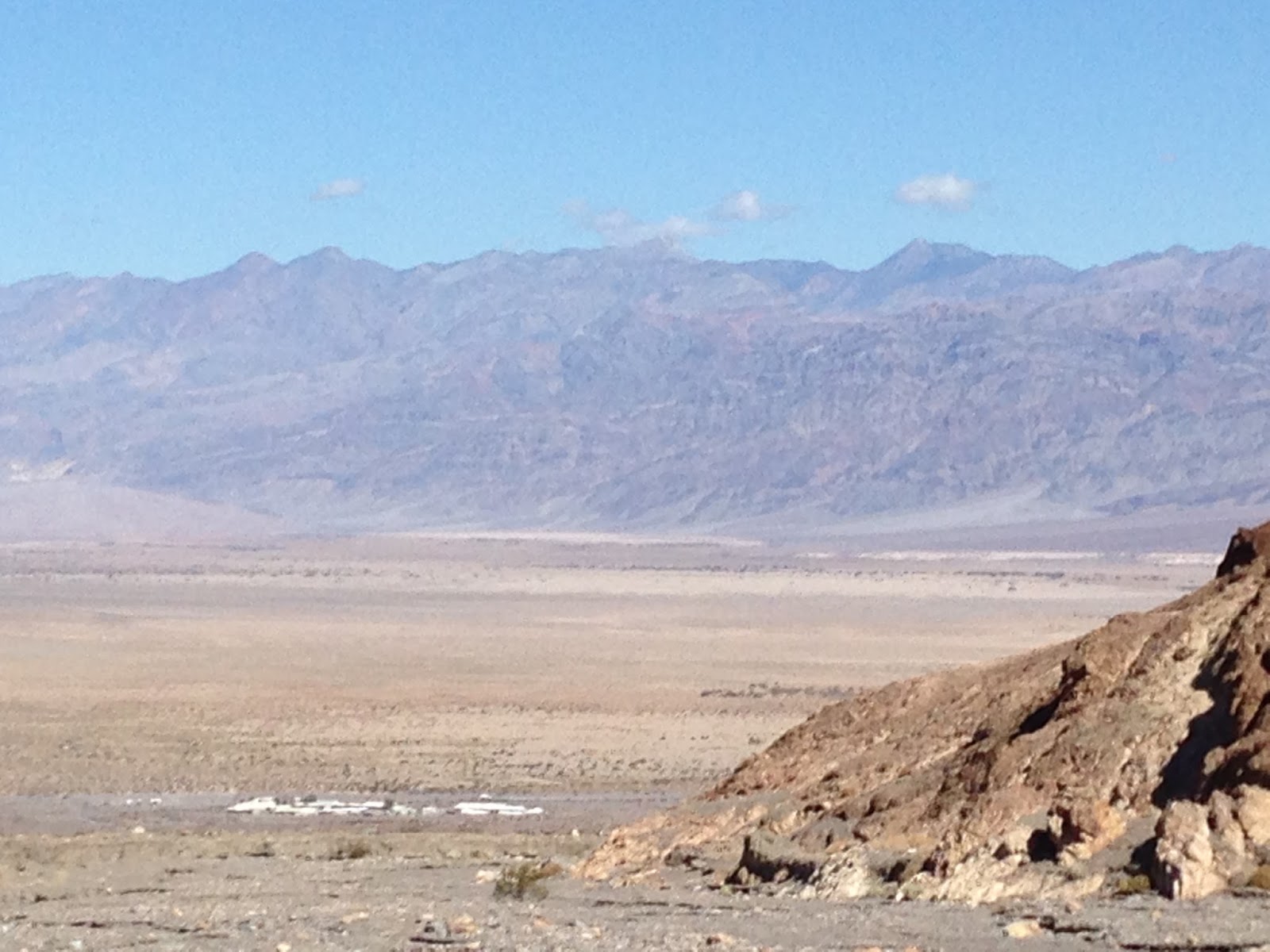 Part of the dune field is visible from the mouth of Mosaic Canyon. It's the pale patch on the ground beyond the white blobs of Stovepipe Wells. 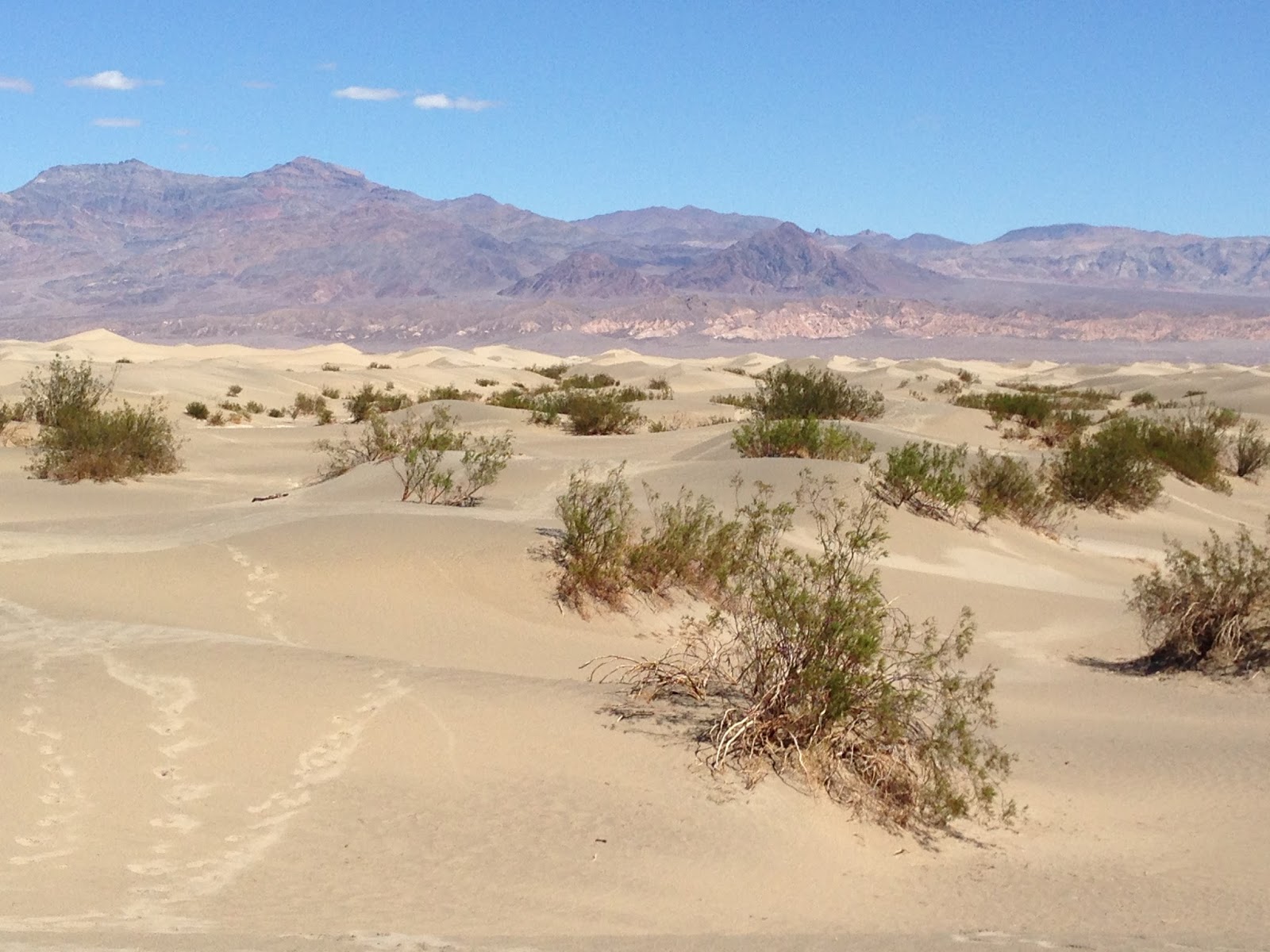 The dunes are so convenient to the road that many films have been shot here. Including Star Wars. (We saw no droids.) I think A. had planned to walk all the way to the Star Dune, the largest of the dunes in the field, but walking on sand is not pleasant and it was lunchtime, so we headed back to the car. And saw the chap with the camera heading back to his RV, too. I wonder if he did anything more than look through a viewfinder and press the button? My shoes full of sand, I debated taking them off to walk, then touched the sand and decided against it. Now I'm curious. We'll have to come back in late July to find out just how hot it does get here. 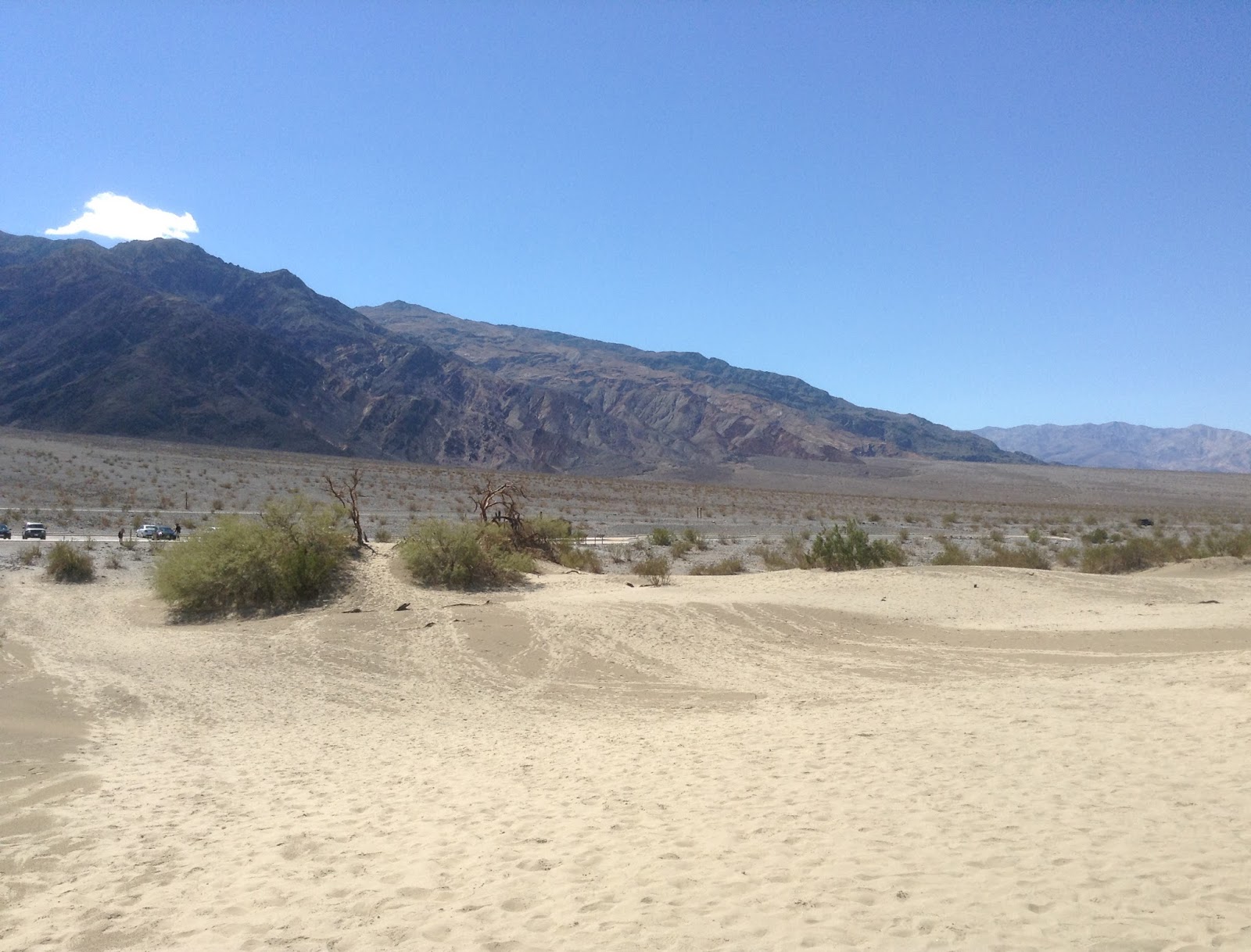 This photo was taken from within the dunes looking back, southwest, to the car park and the Funeral Mountains. I held the iPad as truly horizontal as I could; the sense of skew is due to the angle of the sediment fans coming off the mountains. There's so much I could say about the fans; they're extremely interesting formations. They're highly permeable, so although they're formed by water, water isn't found within the sediments but percolates down to the valley floor below, which is why there's a band of vegetation outlining the point where the fan ends and water is most easily available (look for bands of dark green in that photo of the dune field from the canyon). That's where Furnace Creek and Stovepipe Wells are, too: at the base of fans.

Water. Death Valley is famed for the lack of it, and yet so much of the landscape is shaped by it. Amazing. Intriguing. Wonderful.

Next, the afternoon. Dantes View and Zabriskie Point. But not today!