Malakoff Diggins and the Bear Who (fortunately) Wasn't There.

Our friends wanted to show us a good time while we were with them. They'd clearly given it a lot of thought, because the first part of the excursion focused on geology, while the second part was food. What could be better?

Part One was a visit to Malakoff Diggins Californa State Historic Park. That's the official site, which is much less enthusiastic (and gives much less info) than the park deserves. Wikipedia does a better job, and I'll try to do even better than that.

Basically, it's a large hole in the ground with beautiful fluted, water-worn edges carved into colourful sediments. The history of the hole is what makes it interesting. 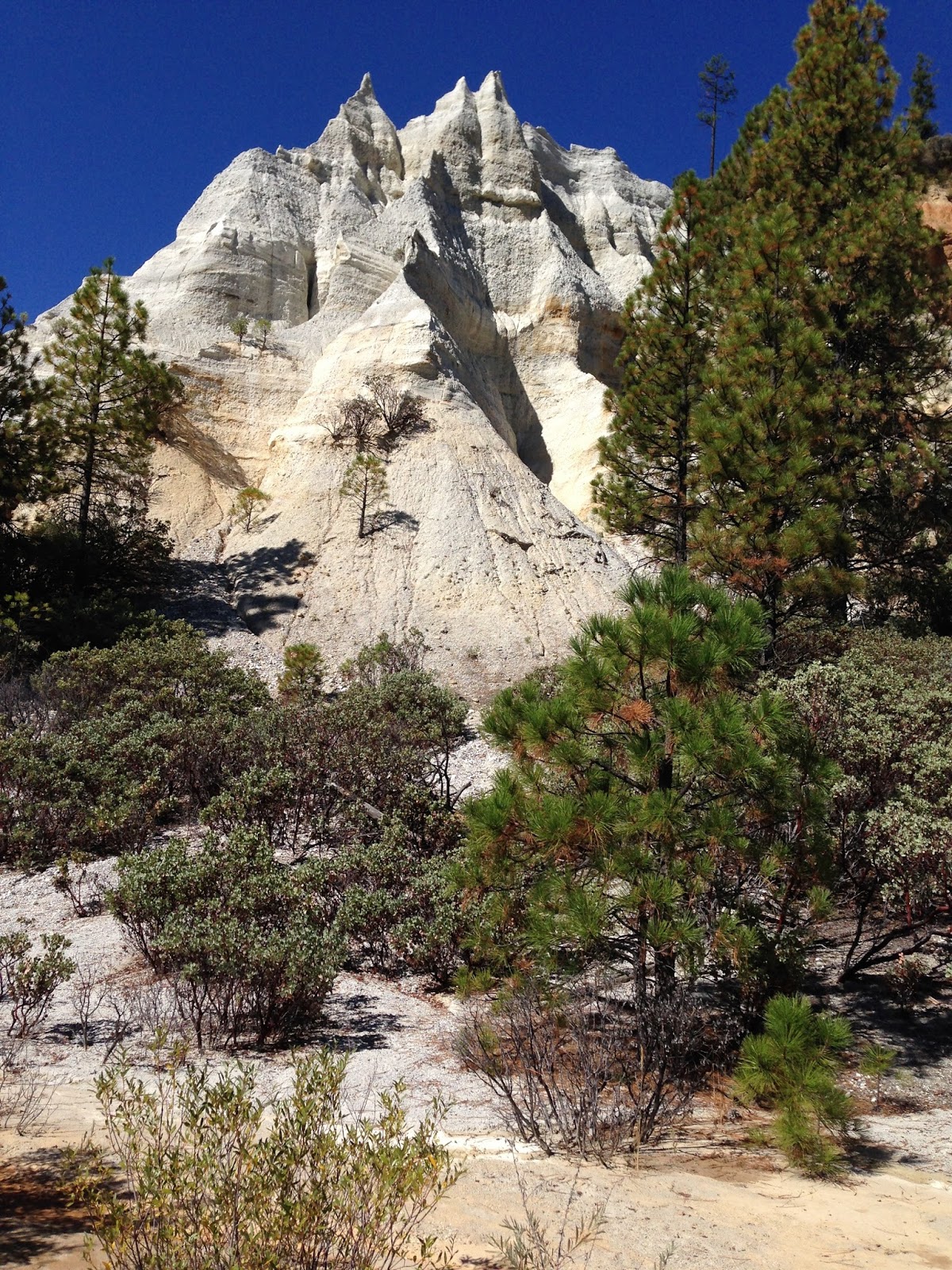 Travel back in time 55 million years or so, to the Eocene. The prehistoric Yuba River (named for the modern river in that area, but following a very different course) is depositing gold eroded from the ancestral Sierra Nevada in its riverbed gravels as it winds through the hills west of what is now Lake Tahoe. In the Oligocene, starting about 40 million years ago, new volcanoes appeared on the crest and eastern slopes of the Sierra Nevada, producing vast quantities of ash (known as the Valley Springs Formation) that choked the Eocene rivers, filling the river valleys and covering the gold-bearing gravels. New streams and rivers - the ones we see today - eventually became established in the new landscape created by the volcanoes; some of these contained gold, but only where their courses cut through the gold-rich Eocene channels.

By the middle of the 19th century the Gold Rush miners had claimed and removed most of the placer gold (loose gold particles in stream gravels or deposits) from the modern streams and rivers. There was still a great deal of gold in the Eocene riverbeds, but the remaining gravels were deeply buried under the volcanic sediments. Many hours of labour with picks, shovels and barrows could reveal the gold-bearing layer, but water was then needed to wash the gold out of the gravel. Human ingenuity found a way to do both: hydraulic mining. By 1853, reservoirs were being constructed high on hillsides above the area where gold was buried. Wooden flumes brought vast quantities of water down the hills to the extraction sites. Fed into hoses and out through cast-iron cannon-like nozzles known as 'monitors', high-pressure water jets washed away the unwanted soil and rock to expose the gold-rich gravels. Malakoff Diggins ('diggings') was the largest hydraulic mining site in California, still the best place to see the results of the technique. Here up to 12 monitors at once were used to carve a pit 1.5 miles long and 0.5 miles wide into the hillside; 600' deep at the time of mining, erosion has since filled it with 300' of sediment.

From the Wikipedia entry on Hydraulic Mining: a monitor in use. 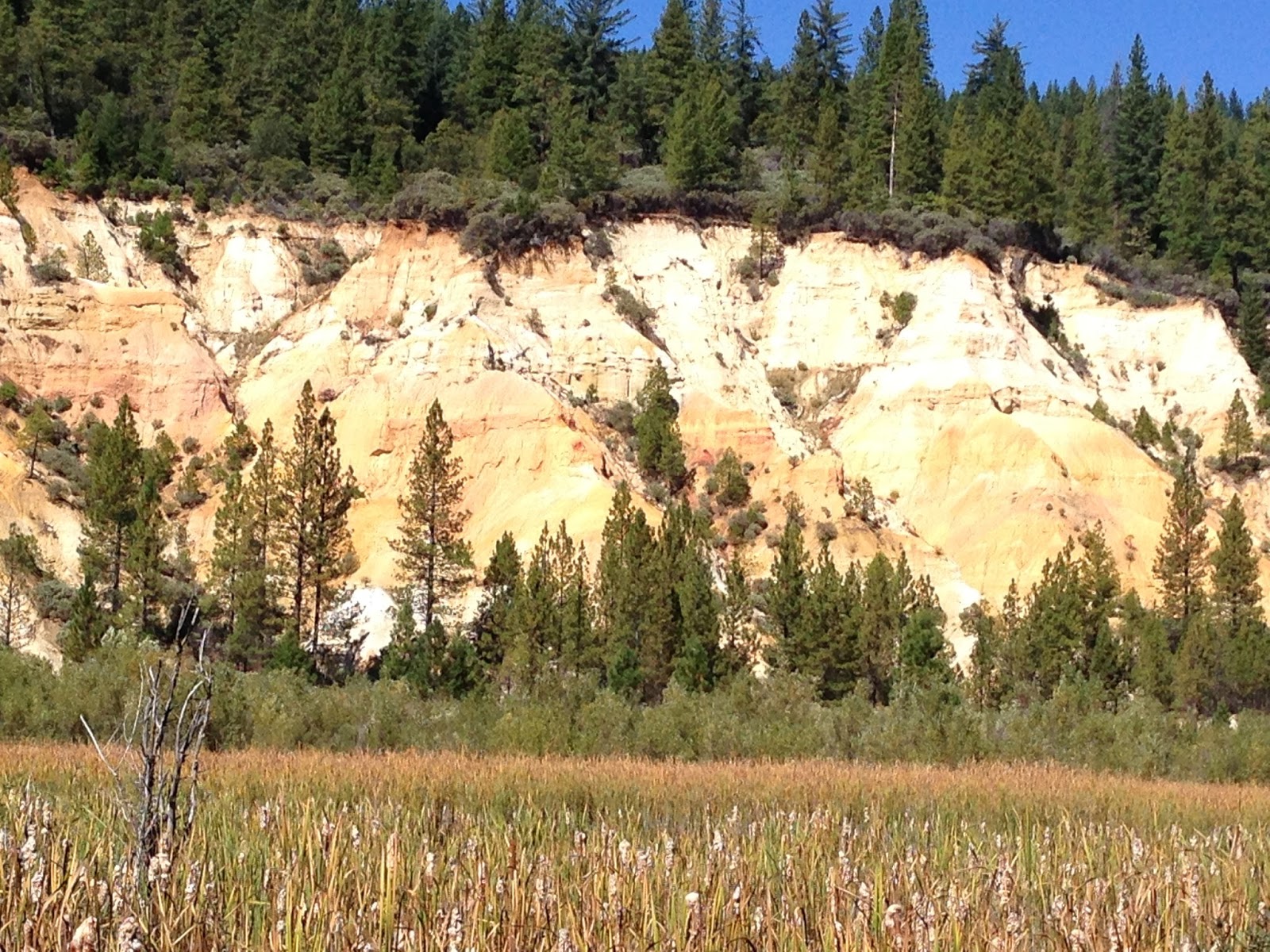 The layers of volcanic ash and stream gravels that filled the prehistoric Yuba River Valley are clearly shown in the cliffs of the Diggins.

It's a weirdly beautiful place. After picking up a map from the Vistor Centre in North Bloomfield, the historic remains of the 19th-century town that serviced the Malakoff Diggins, we parked and walked down to find the circular route way-marked around the bottom of the pit. As we walked, it struck me that volcanic debris has been one of the highlights of this trip, a feature of the landscape since we drove south from Yosemite. Layer upon layer of bright pale colours glowing under the California sky: I shan't forget it.

We walked, we talked. We talked about studios and their contents as recording an artist's route through his or her craft. We talked about the difficulties of disposing of materials that are no longer needed; I suffered a momentary lapse of good manners when S. suggested I might inherit some of hers (there's a significant drop in front of us; one little push … it's mine, I tell you, all MINE!) 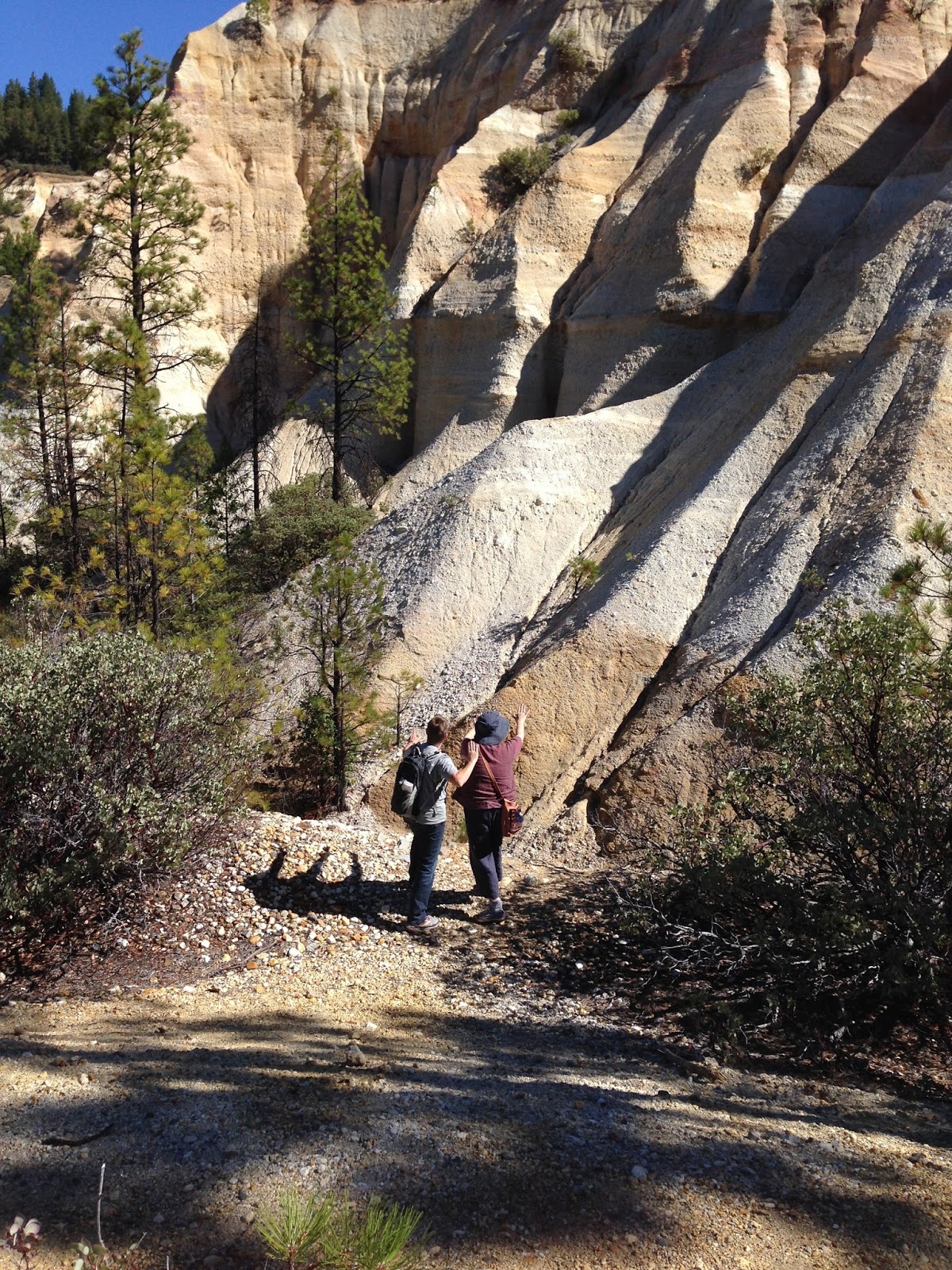 The well-trodden path grew fainter; clearly many visitors didn't walk the circle, they'd turned back. We meandered on, continuing to talk, while the menfolk followed. 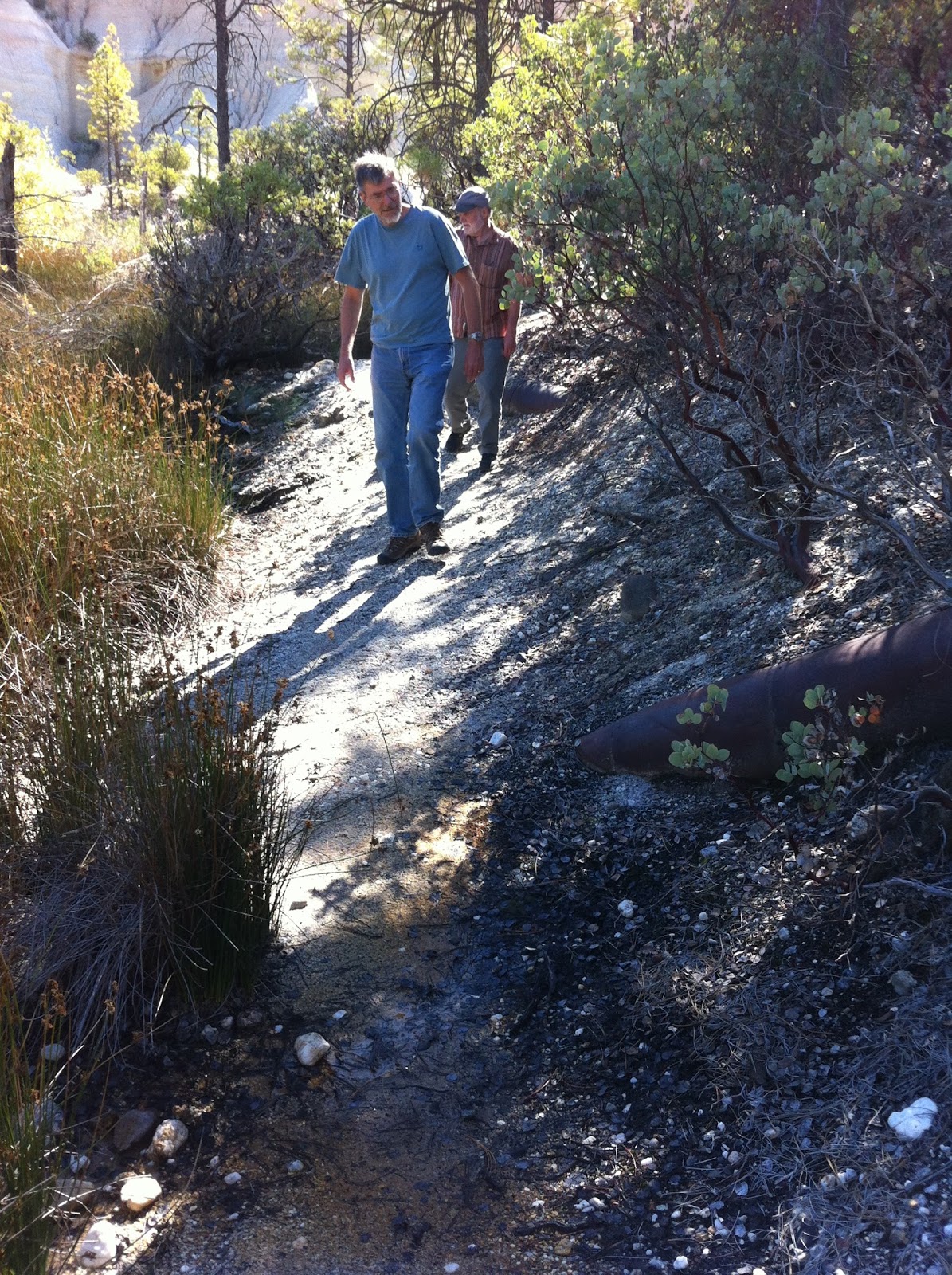 Look closely at the picture and you'll see a length of iron pipe that was once part of the monitor system. The ground is littered with it in places.

The trail grew fainter and we started casting about for the next waymarker. We eventually found it, or the top 4" of it, almost buried in sand and mud. The shrubs growing on the floor of the pit are part-buried, too. Eventually the pit will be no more than a hollow in the ground. 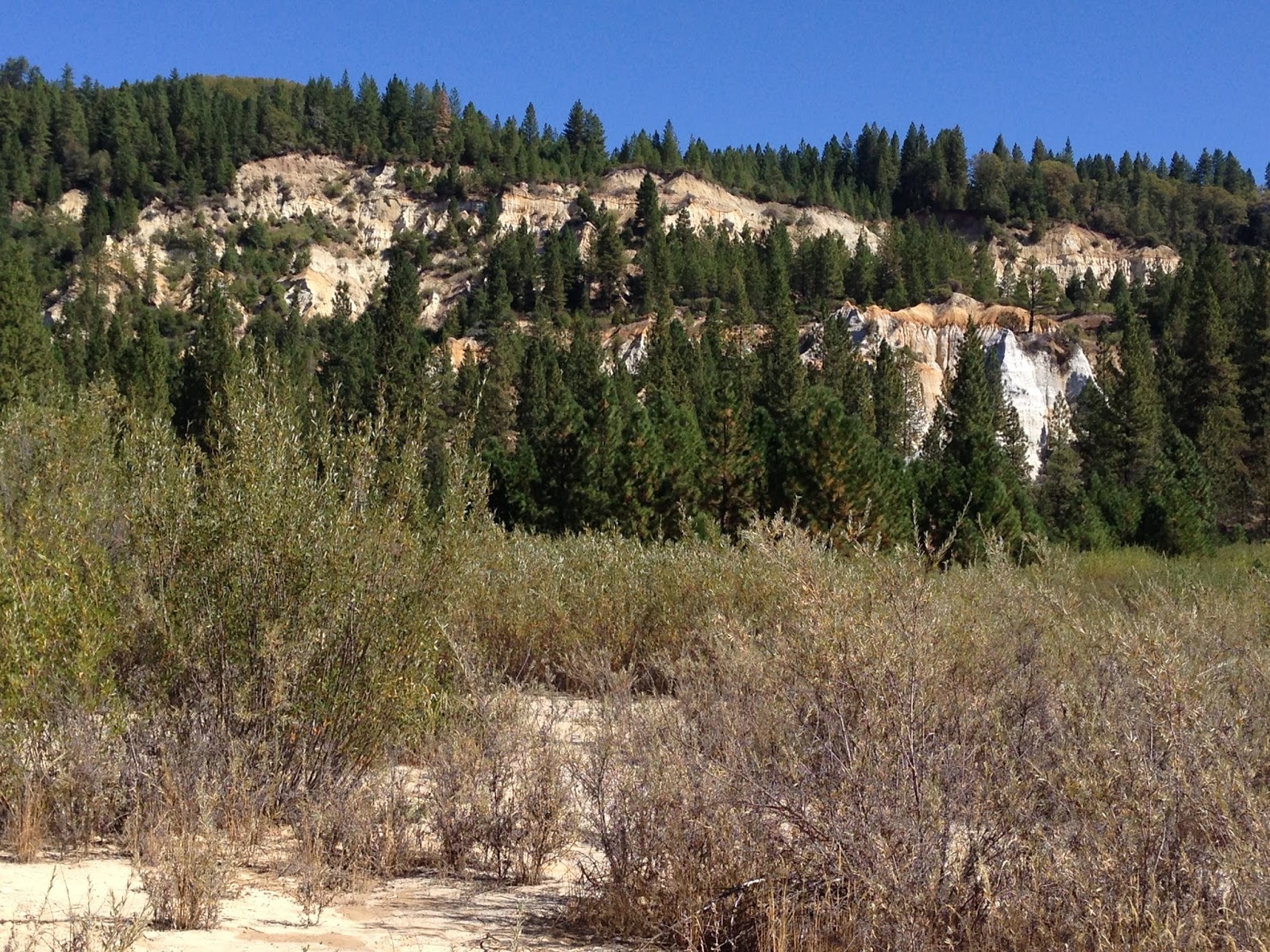 Watching for boot- and shoe-prints to confirm that we were on the right path (or at least that other people had walked the same way), I noticed several deposits of, um, animal spoor. Scat. Feces. Full of berries, not hair, and not white with bone. It took a while for the long-buried memories of my summers working in the Rocky Mountains in Alberta to surface. When they did, I suggested we talk more, and louder. I started looking for pawprints rather than boots (I found them), and took a much closer look at the next deposit. 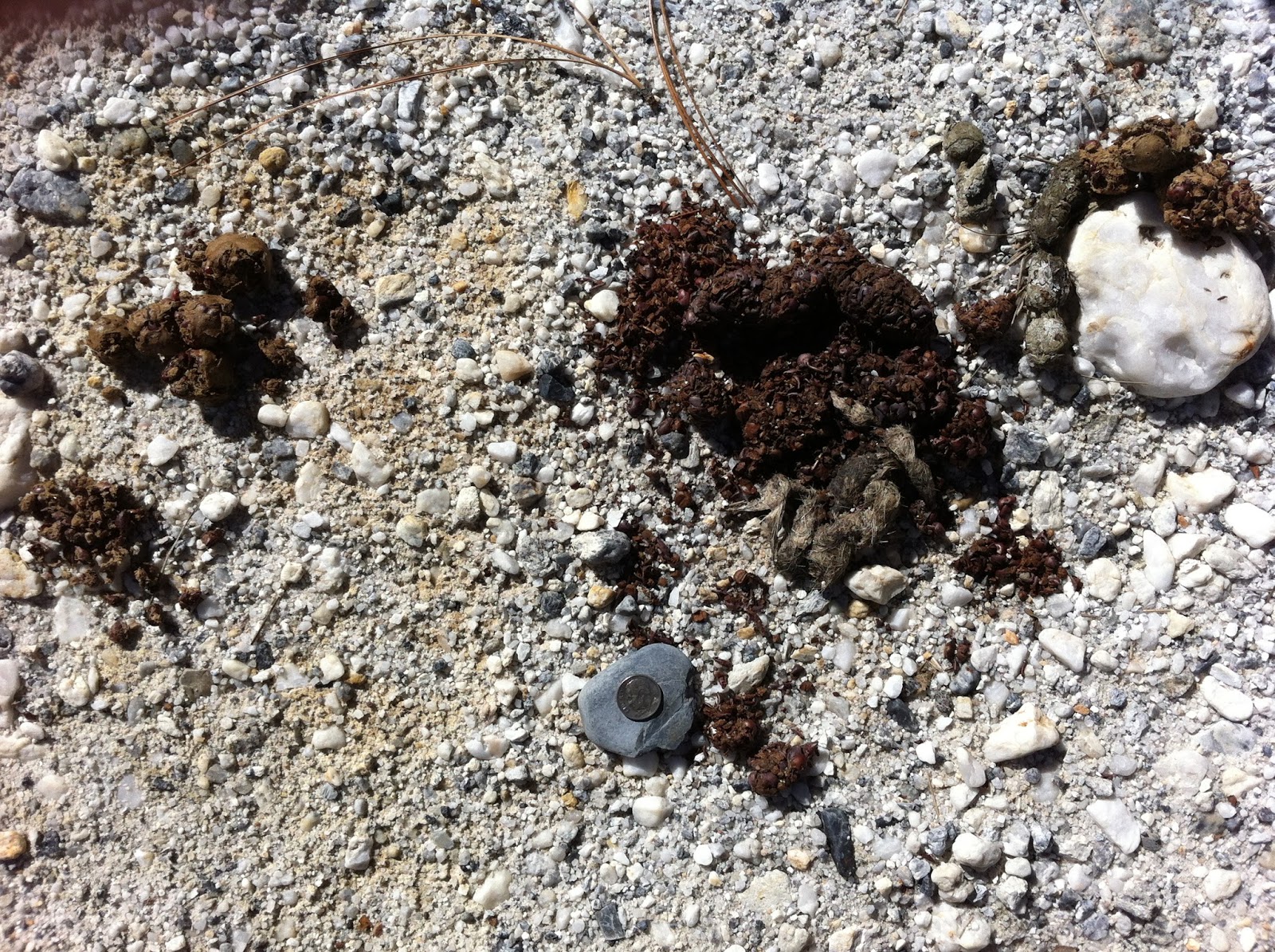 Bearshit. (Plus some coyote, near the white rock, looks a bit like dog but contains more hair from the animals it's eaten.) Three lots of bearshit, in fact, one large and two small. A mother and two cubs? I didn't recognise the berries, but S. suggested manzanita and when we later found a bush, it was a good match. There were no berry-bushes in the area, but clearly there had been several bears (or fewer, with some digestive issues). 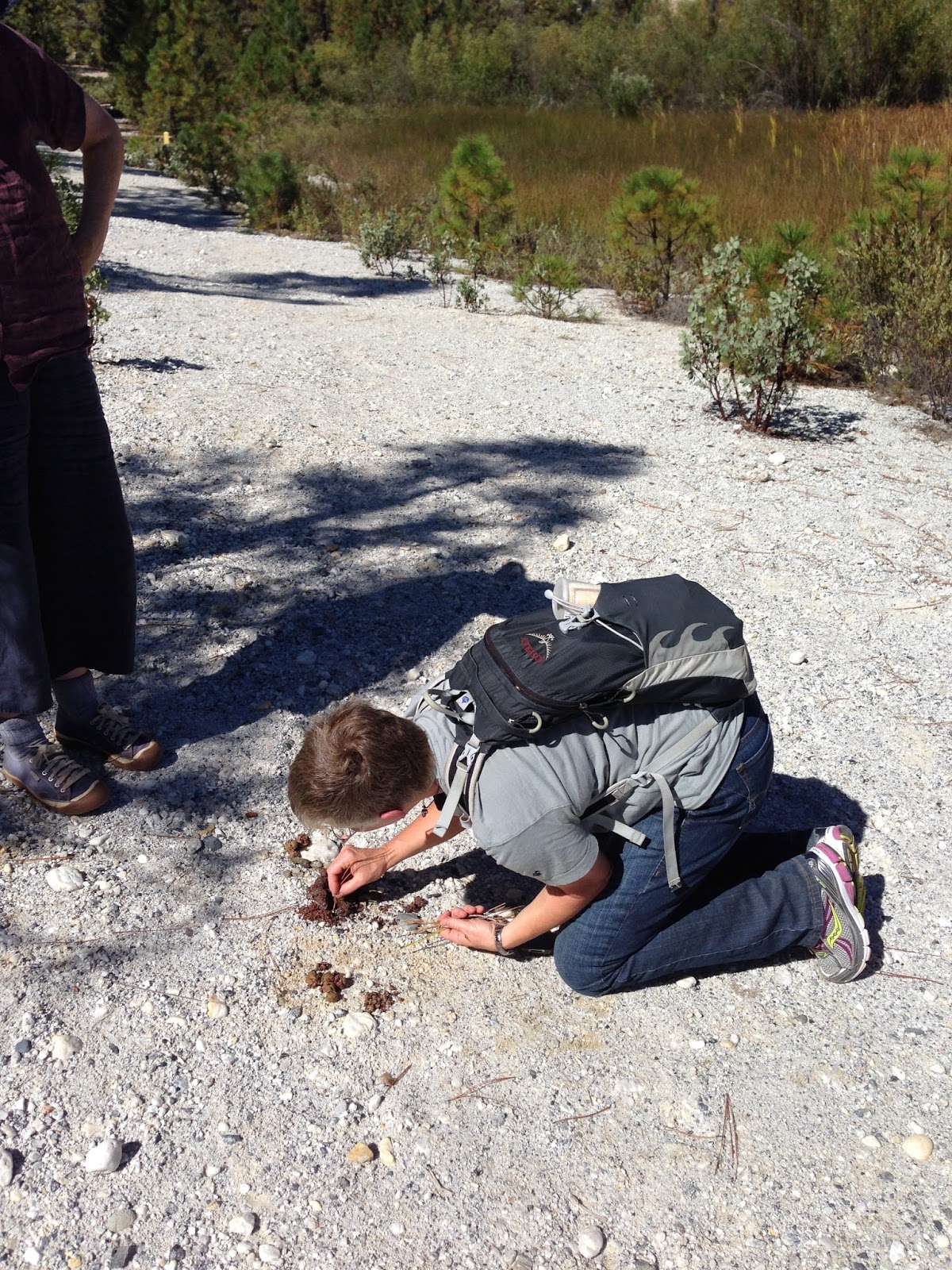 A. thought my engrossed examination of the bearshit was worth recording for posterity.

We continued to walk, talking loudly amongst ourselves to let any bears know we were coming. It was midday, but still: better safe than sorry.

There's a lake of sorts at the far end of the pit, which leads neatly to the question of what happened to all the water jetting out of the monitors? The pit had to be thoroughly drained to expose the gold-bearing gravels (known as the blue lead for their colour). An 8000' tunnel was excavated through bedrock to carry the waste water out of the pit and into Humbug Creek, which flowed into the Yuba River. Known as the Hiller Tunnel, the stretch nearest the pit is still accessible. And with the water went the hillside it was washing away. The sediment in the tailings from hydraulic mining created an environmental disaster: the mud polluted rivers, killed fish. Mud washed from these hillsides began to fill the beds of the Yuba and Sacramento rivers (just as it had filled the bed of the prehistoric rivers the first time around), causing flooding of cities and farmland, and preventing ocean-going vessels reaching their ports. In desperation the farmers filed a lawsuit to stop the hydraulic mining and in 1884 Judge Lorenzo Sawyer issued an injunction banning the dumping of mine debris into the Sacramento and San Joaquin rivers and their tributaries, effectively haulting hydraulic mining in Northern California.
Excavating this pit is thought to have cost the North Bloomfield Gravel Mining Company about US$3 million, and they probably recovered about the same amount before mining was halted.

There. Isn't that at least a little bit interesting? Not knowing all of this at the time, and being rather hungry, we were more interested in lunch! The Ridge Cafe, North San Juan, was perfect. Especially the lemonade, which was almost the Plato's Cave version of the cold drink I needed. And then we went home and talked some more.