The next morning was so utterly perfectly beautiful that I suspect any gods in the vicinity of being sadists. We could see a far distant fog bank offshore, but on shore it was warm and sunny once again. Looking at these photos I am reminded that, when I commented to a Californian friend that a particular shade of turquoise meant 'summer sky' to me, she disagreed, saying it should be darker, more vivid. She's right. After a hotel breakfast of 'muffin' so sweet I'd have called it a cupcake, we headed south on Hwy 1. 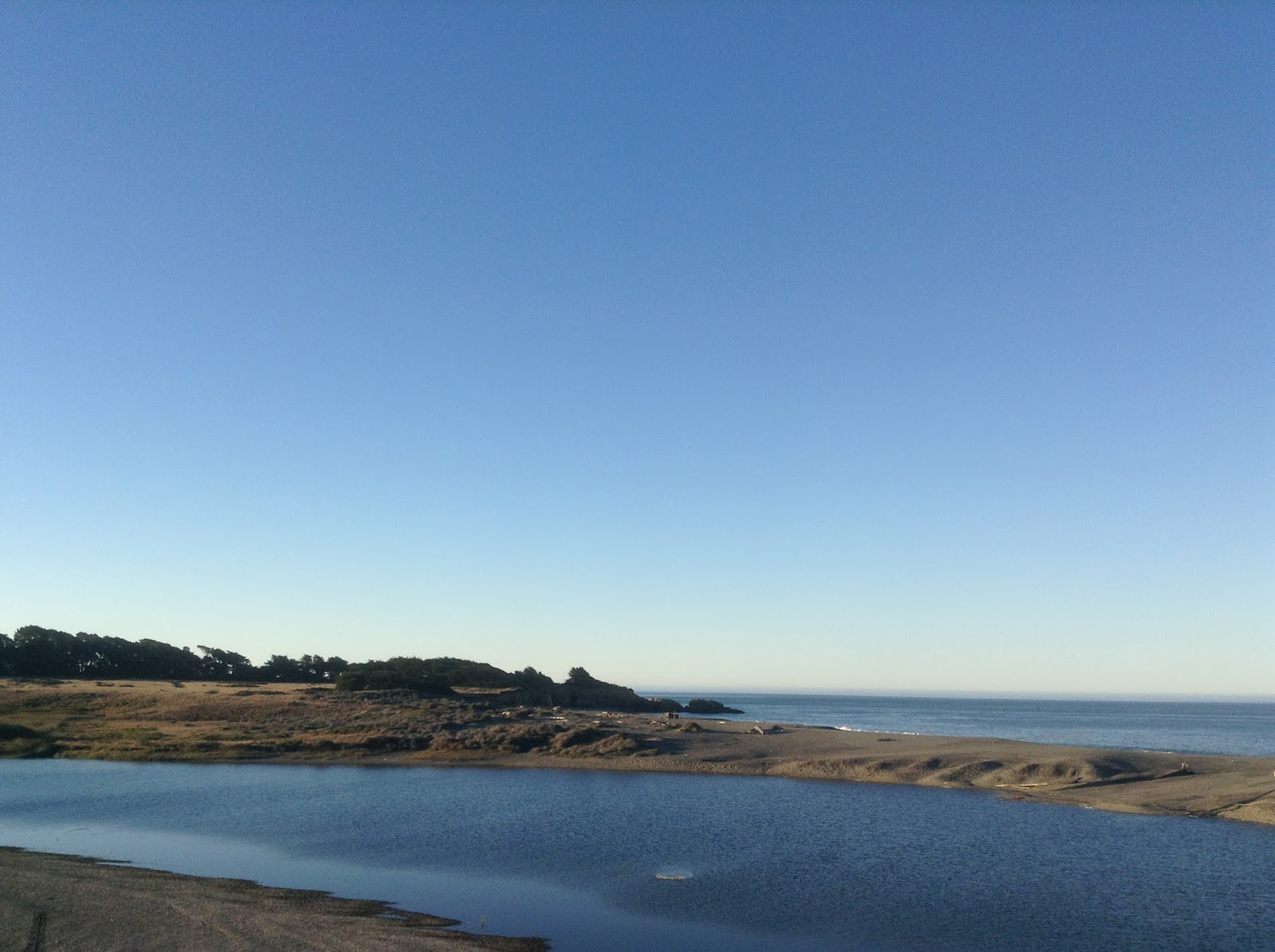 But not for long, as we stopped to walk in the Gualala Point State Park about a mile down the road, where there were scenic weather-beaten trees. 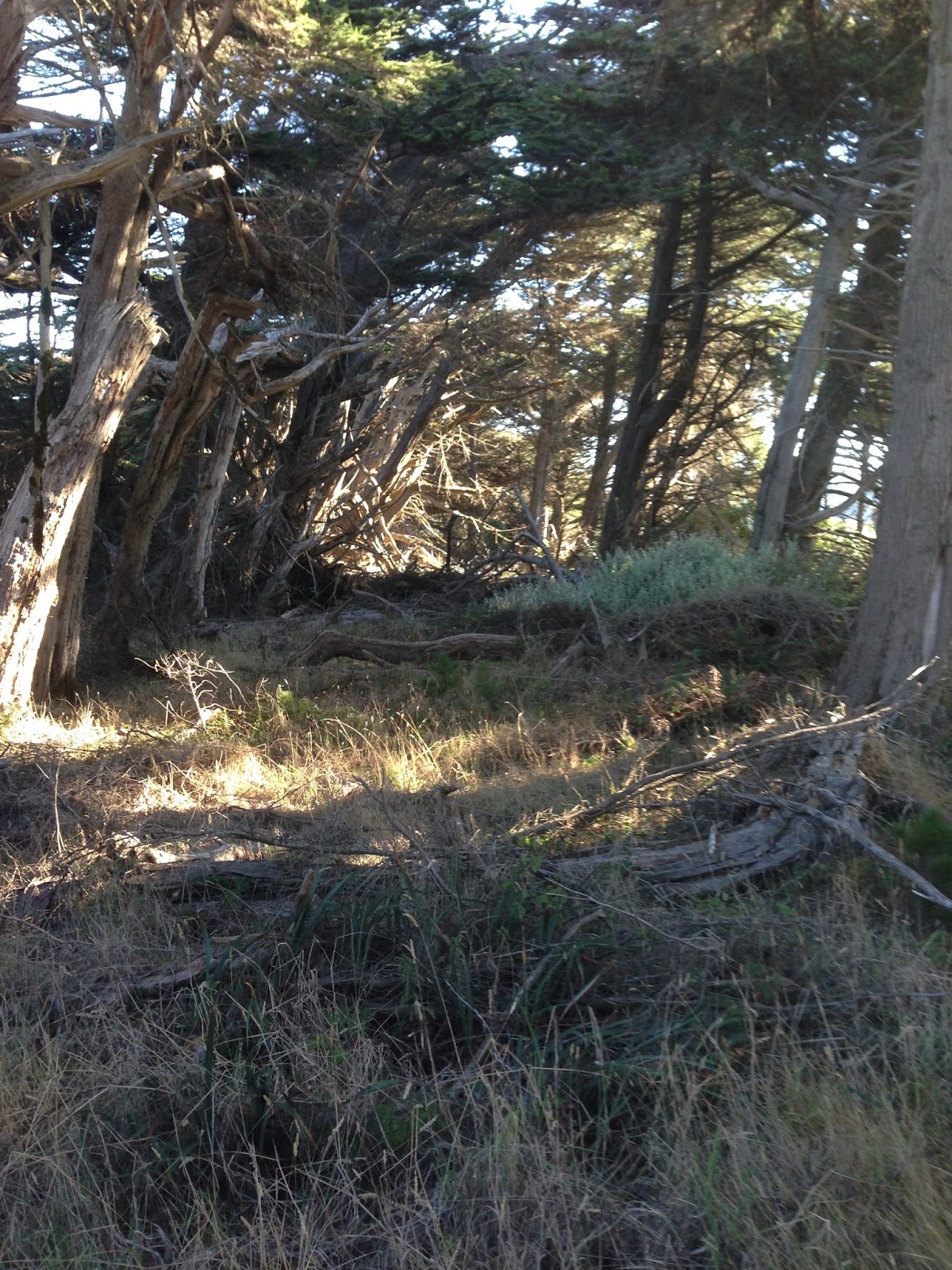 Ever since I first encountered the sea, well, the ocean, aged about 8 and was astonished by the salt of it (knowing it's salty is not the same as tasting the salt), I have to taste the sea to check that it is still miraculously salt. It was. There was kelp, too, and lots of stones, and the sound of breakers on the beach. Perfect. 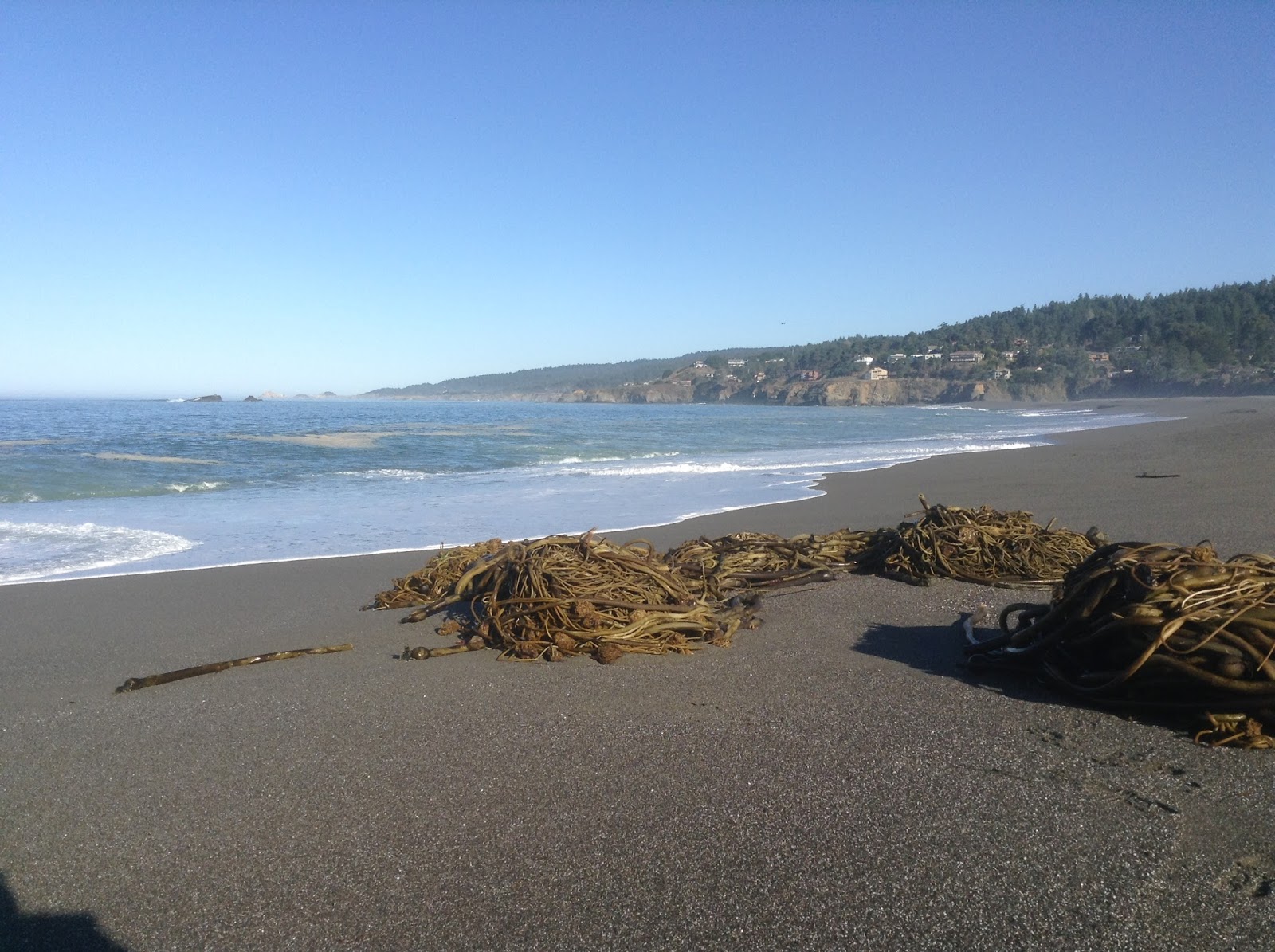 The visitor centre was closed for the season. Outside in an alcove was a plastic pallet, a strange thing to display. A brief laser-printed note said the kanji characters identify it as coming from a factory near the tsunami epicentre, and that the group that found it wrote to the Japanese Government and are now waiting for someone official to confirm this and let them know if it should be returned as a gift/momento. I couldn't help thinking it very unlikely that anyone in Japan would want or need it as a reminder. 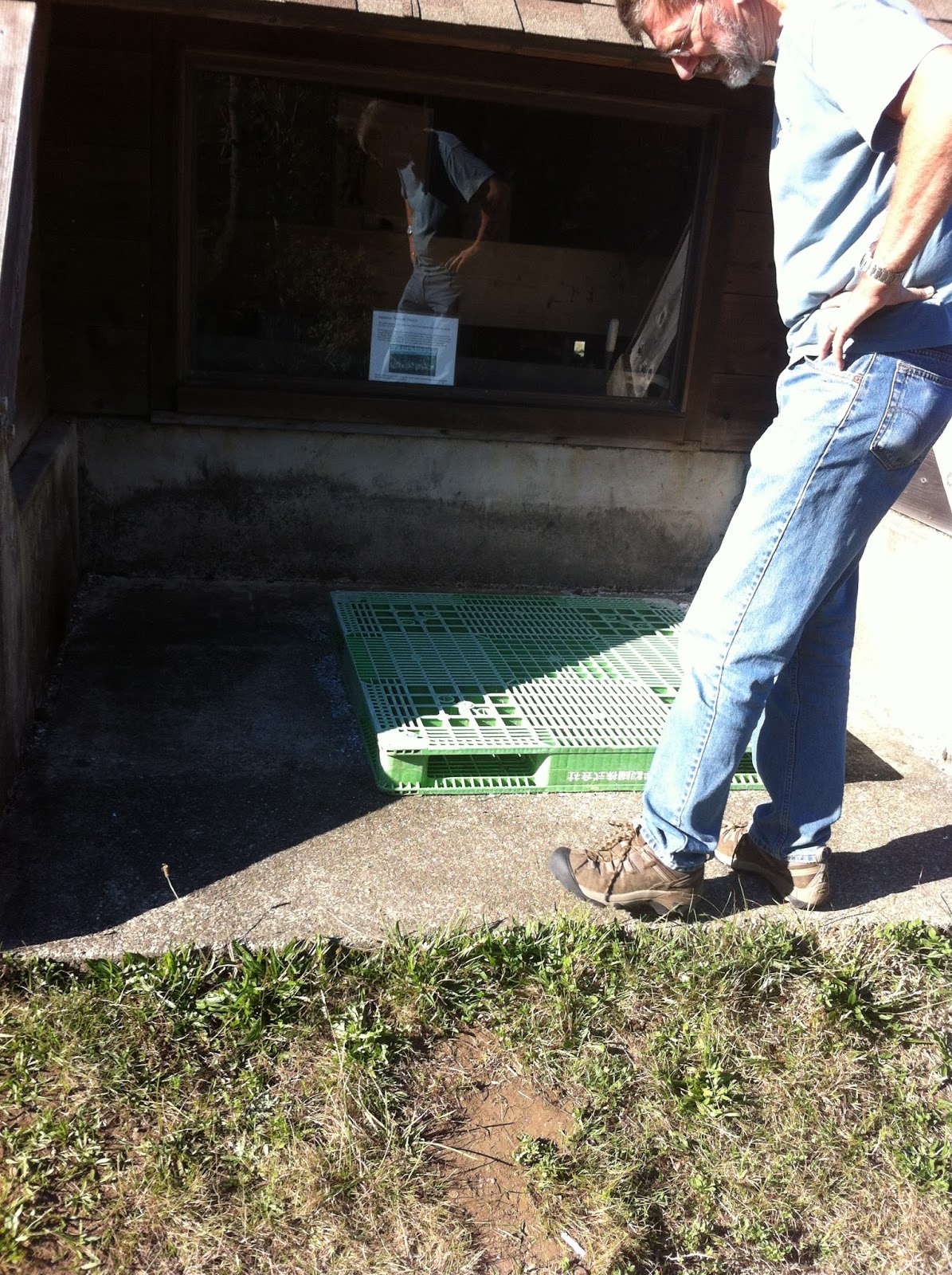 And then we went south. It's very scenic, but an awful lot of the shoreline is privately owned, covered with what look like summer/holiday homes. I had the sense that the State Parks were shoe-horned into the gaps when someone realised that there'd soon be no beach access for visitors anywhere. The coast rose steadily until the road was high above the ocean with spectacular views. There were cars parked anywhere that a path led down to the water, and people were trailing down laden with wetsuits, surfboars, picnic lunches.  Lunches! Now there's an idea. 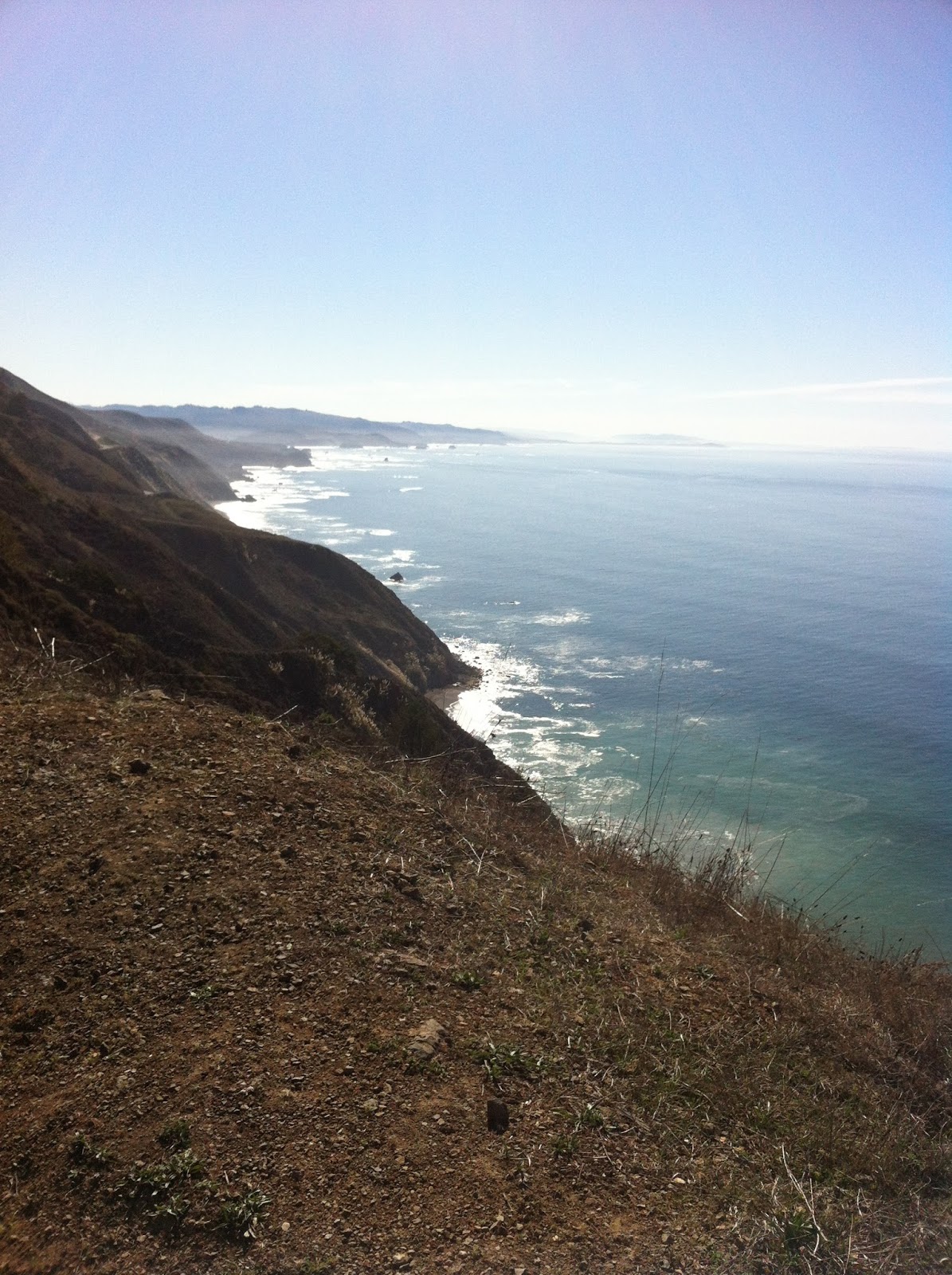 We found space to pull our car off the road at Russian Gulch Creek, where a path ran through dense, hot scrub down to the beach. 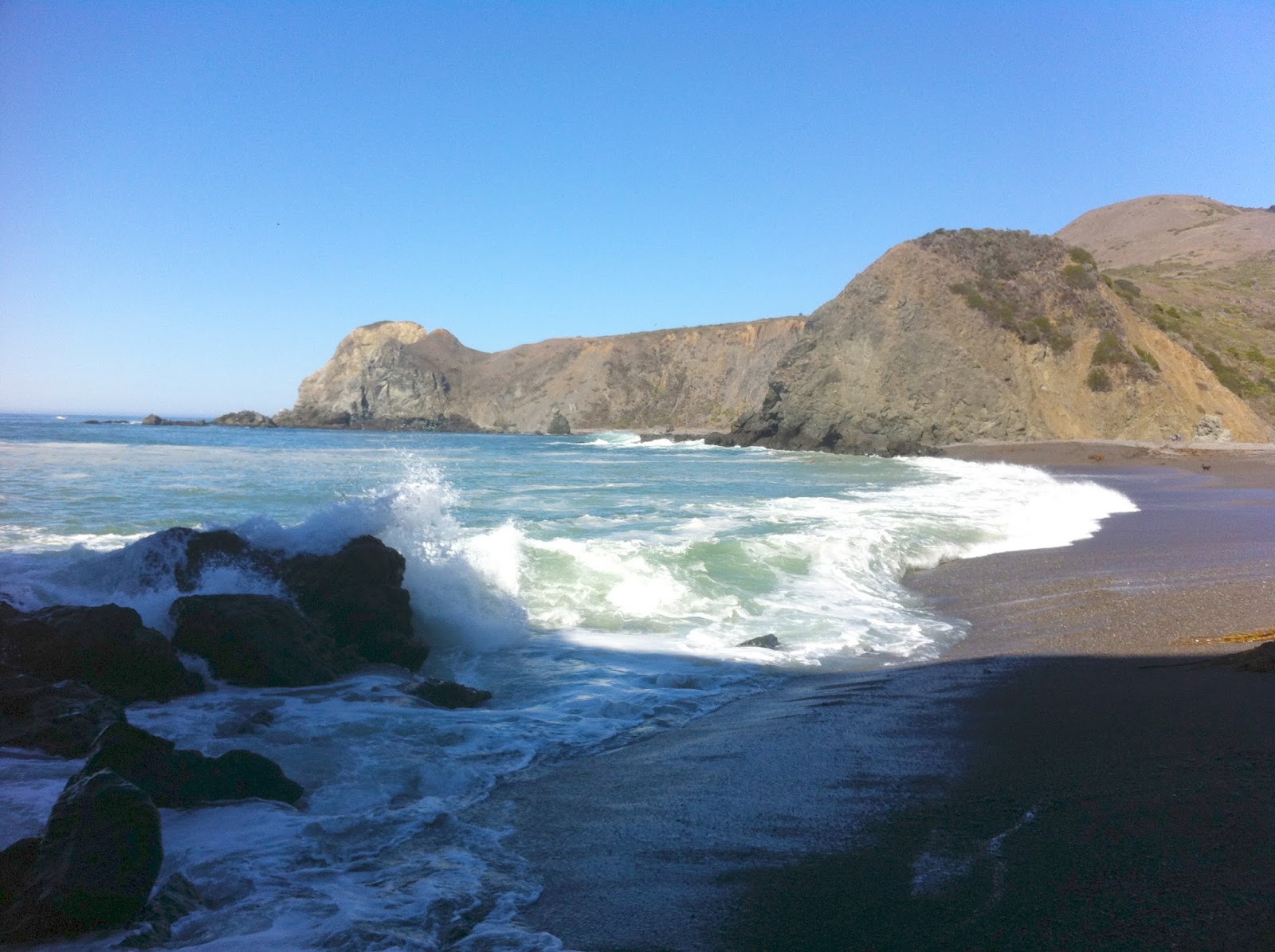 The archetypal west coast beach. Pebbles rather than sand, green-blue waves crashing white on the beach. According to the geology book some of the pebbles might be jade; we wandered along the shore, heads down, looking for jade, then retired to a rock on the sunny side of the beach to assess our findings. 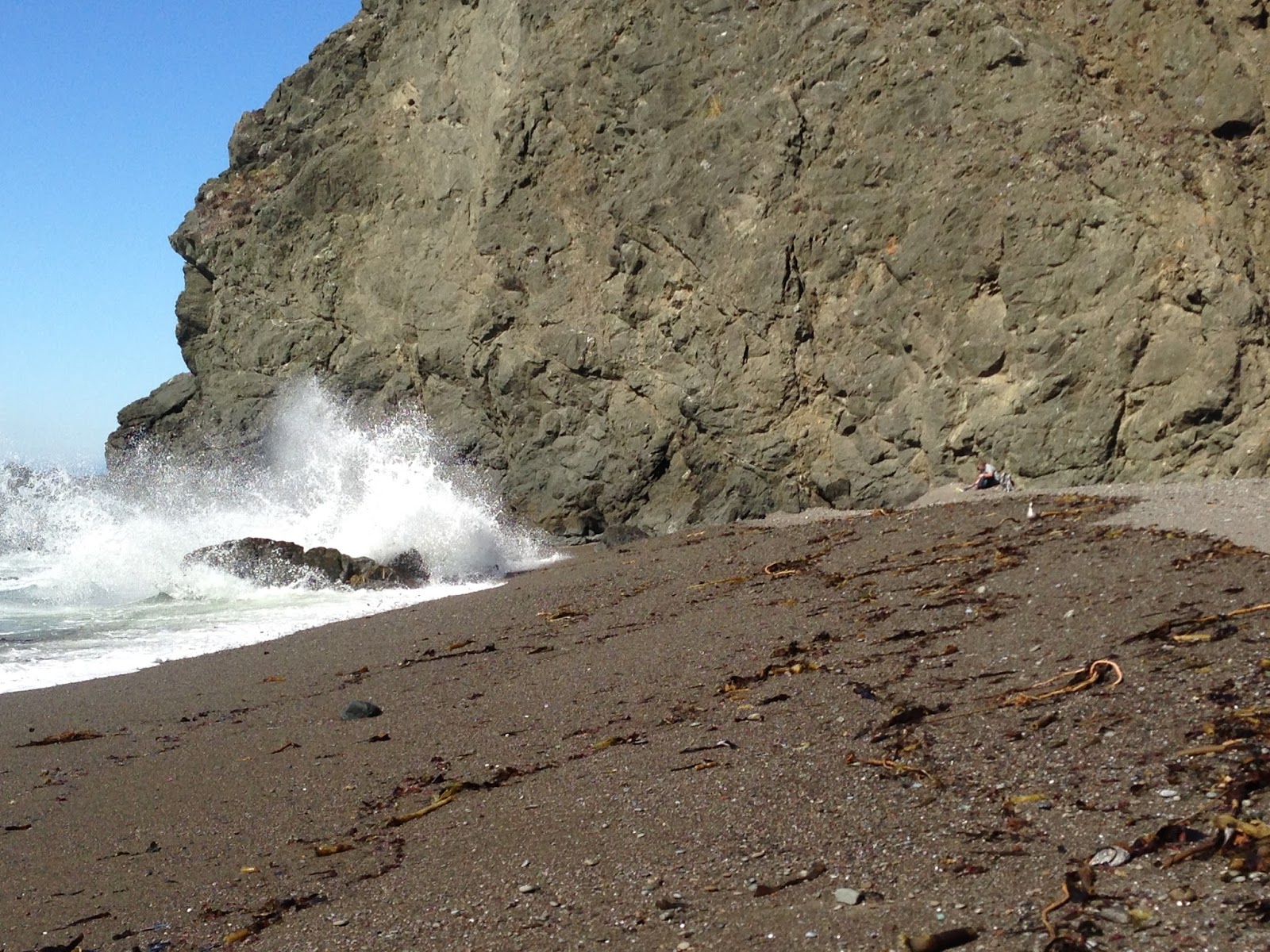 I retired first. Being so well-practiced at picking up rocks, I picked up my quota faster.

If you look at Google Earth, you may notice that this is one of many coves at the seaward end of valleys that all run at roughly the same angle up into the hills. The creeks and coves mark the area where a major fault comes ashore; movement on the fault has chewed up the rocks, softened them so they're easily eroded by streams and seawater. The rocks themselves are a mixture of seabed, pebbles and rounded pillows formed by lava erupting under water. 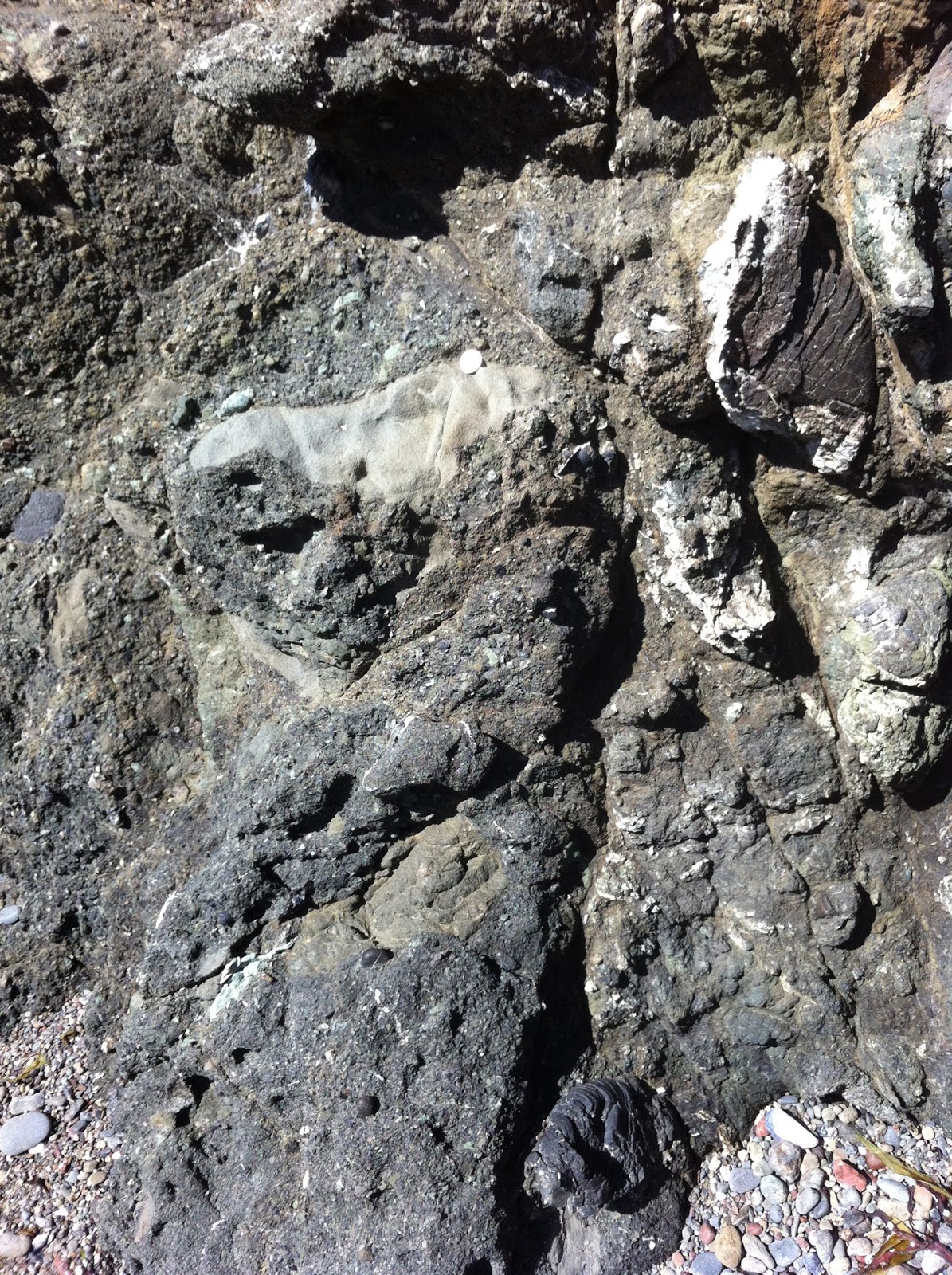 Nothing for scale, but from memory the entire image is about 18-24" wide.

It was Too Hot in the sun, so we moved across the beach into the shade and watched a nubile young lady giving yoga lessons to an older man in the sun while his bored dog danced about waiting for fun! now! We ate the last lavash from Schat's in Bishop, dried nectarines from San Francisco, and protein bars from somewhere-or-other. We watched cyclists - lots of cyclists! - flashing down the hill on Hwy 1. We practiced giving seagulls the evil eye to see if they would be deterred by glare alone. We lingered. We procrastinated. We didn't want to leave. 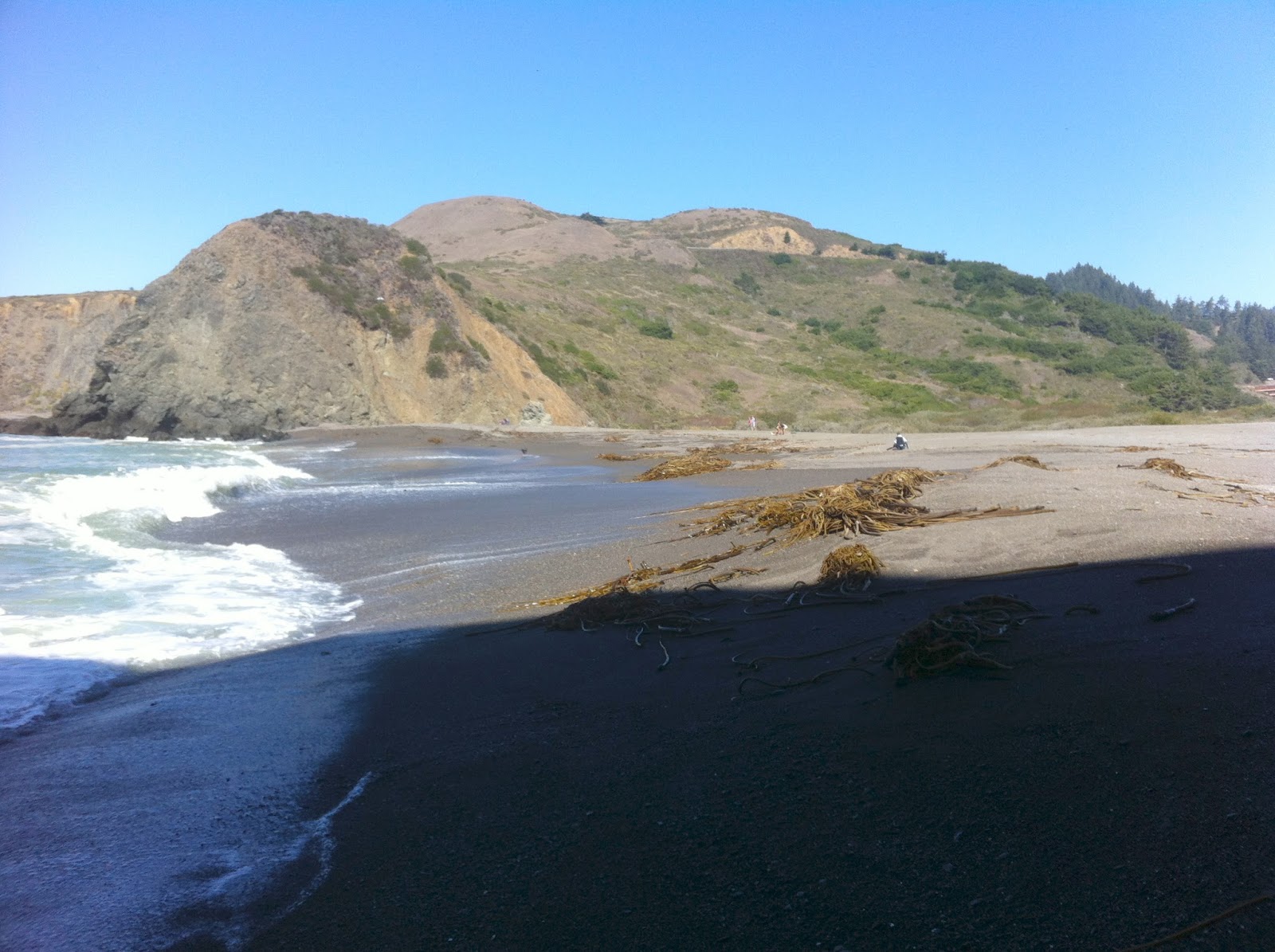 But we had to. After visiting what was, I think, the nastiest toilet I've ever encountered in my life (but very convenient), we continued south, now with added cyclists. I was very glad to be in the car rather than on a bike on the hills. 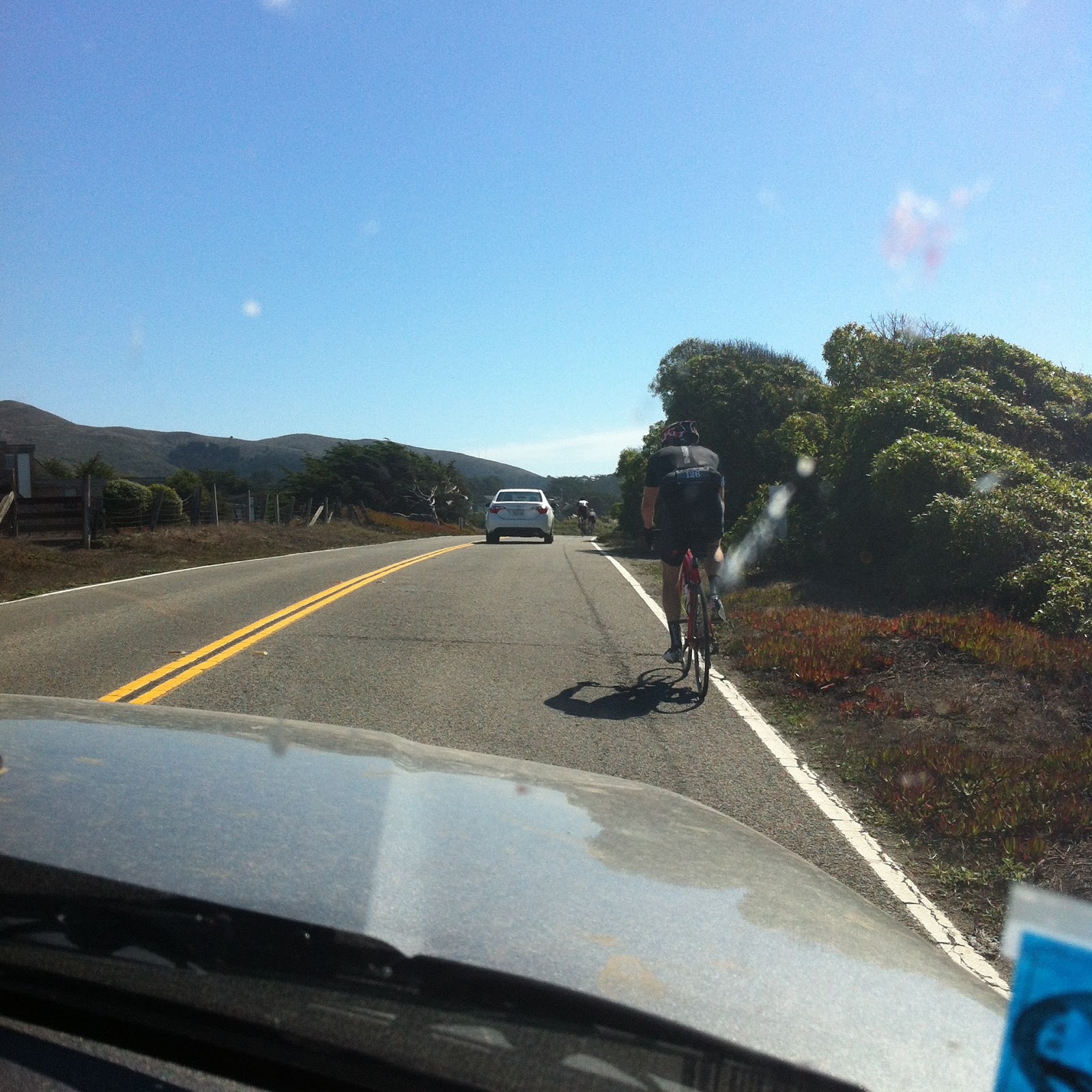 We cut across to Petaluma, passing through Valley Ford where I spotted a sign for a wool mill and shouted STOP! Not a mill, but a shop selling local wools and alpaca (mainly alpaca). I didn't like the hand of the wool, but was able to give the first and last spinning lesson of the trip to a gentleman who had bought a 35' motorhome for his retirement. He and his wife return to their house in New Mexico when they're tired of travelling. He gave A. very serious, very well-meant advice about the maximum length of motorhomes allowed in various parks across the southern US; we'd been thinking more about smaller 4x4 vehicles for our next trip :-)

And then we were flowing south on 101 heading towards the Golden Gate Bridge. A. wanted to drive the 18% grade we hadn't cycled when we rented bikes in SF at the start of our trip, so we pulled off for the Marin headlands. So. Much. Easier. to get up Hawk Hill in a car! 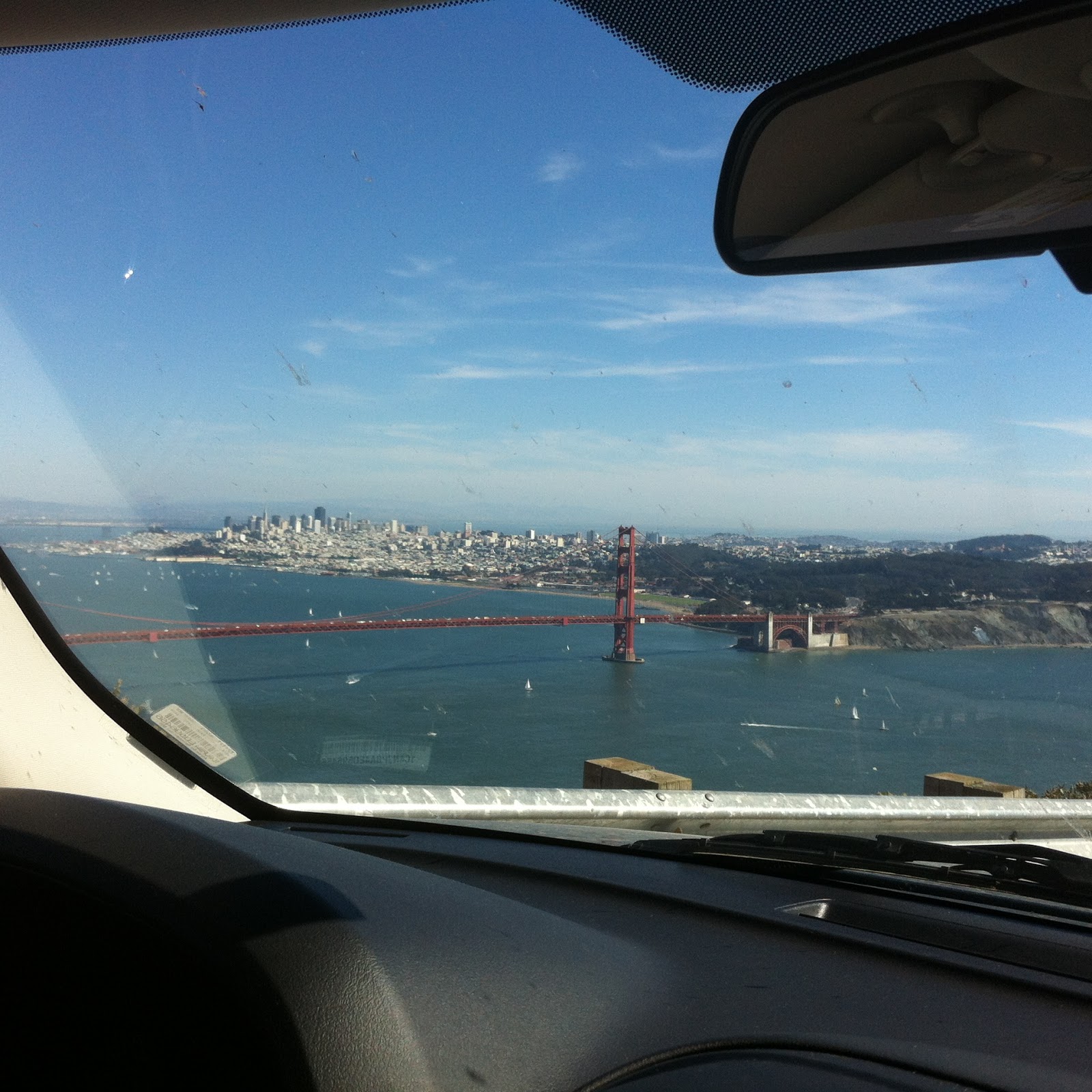 We stopped briefly at the top for a last look at SF, then followed the car in front down - straight down, it felt like! - the hill, around to the Visitor Centre, then through the tunnel and back onto 101. 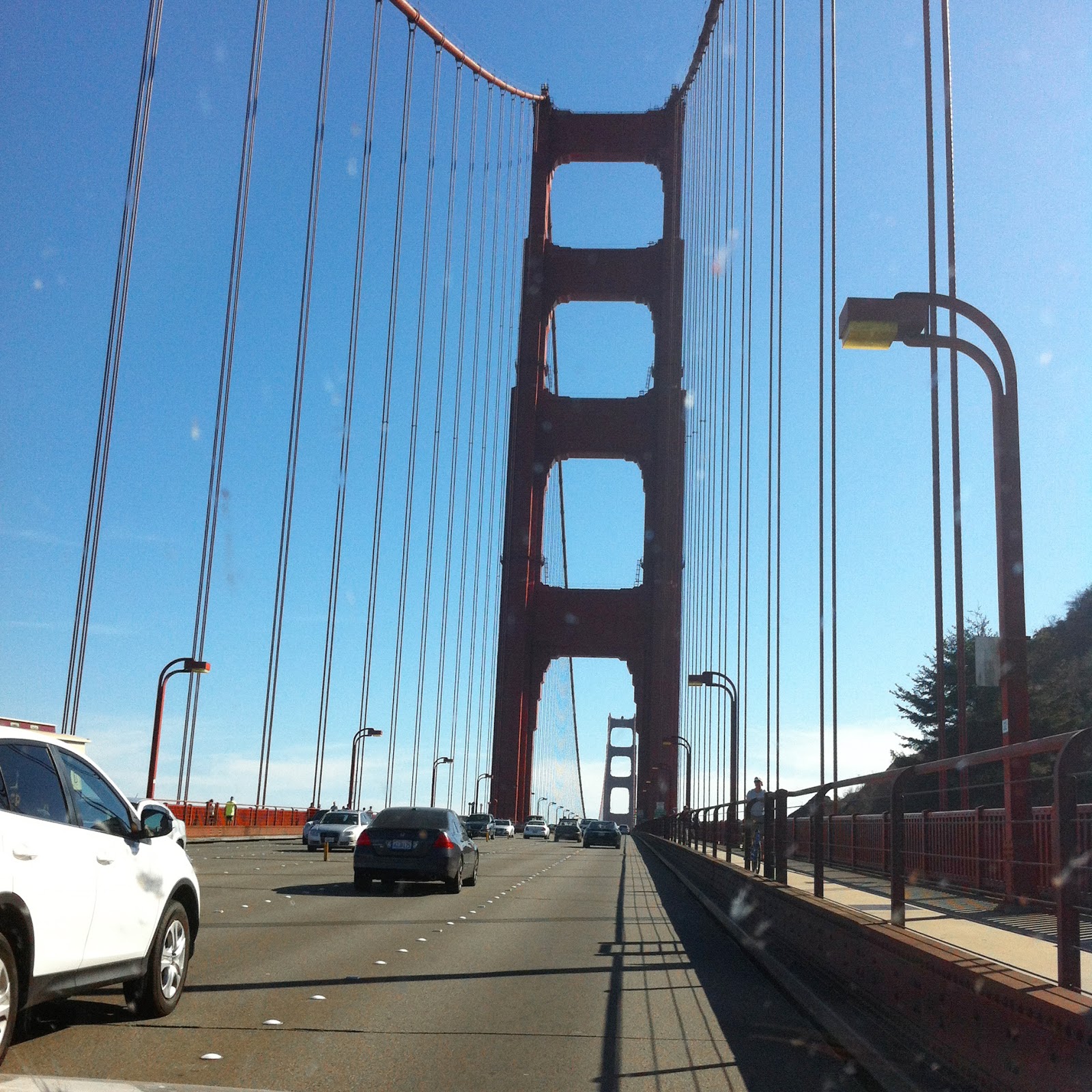 This time, following 101 south through the city to our airport hotel was a breeze (we felt like natives, recognising street names and everything). Our last night was bittersweet: a good friend and her husband picked us up and took us out for an evening meal: west coast fusion cuisine and a walk sparkling with conversation, discussion of all things under the sun on a warm California night. And then back to the hotel, where we said goodbye. We walked into the lobby elevator – and it was over. There was nothing left to look forward to: all the anticipation, all the pleasure, the sunlight, the colours, the smell of sagebrush, sitting with friends on warm afternoon, all were now memory.

The next morning we took the car back. I ran my finger through the dust on the side of the jeep and whispered "You did us proud. Thank you." We got on the train and we went through the queues and the security and more queues and we sat in the terminal and watched the planes come and go and voiced, sadly, the one consoling thought "We can come back."