So. On this grey, cool and dank (we had a lot of rain yesterday, persistent streaming all-day UK rain, not cataclysmic desert rain) British morning, I am thinking of heat and colourful rocks glowing in the sun under a rich blue sky.

We ate lunch, looked at the map and speculated on the origin of the sand dunes, which veered into nonsensical assessment of the possibility of buying good souvenir t-shirts in Stovepipe Wells. Lack of data rendered further discussion pointless so we went to Stovepipe Wells to acquire data, a t-shirt each. Then my demands for more! information! NOW!! drove us to seek enlightenment in the new National Parks visitor centre at Furnace Creek. We'd driven through their parking lot first thing in the morning, but sadly it didn't open until 9am. The Centre is worth a visit; it's a good example of modern interpretation, placing as much emphasis on conservation and environmental issues affecting the area, and the displaced local peoples, as on the wildlife and geology. It's the right thing to do, but knowledge of the issues involved does reduce my enjoyment of a site. And they had a geology book!

Then we headed south on 190 for Dantes View. We passed the Furnace Creek Inn, built in an architectural style that left me speechless with dismay, past the parking lot for Zabriskie Point, jammed with buses and cars. A. (who was navigating) said "Take the turn on the right for 20 Mule Team Canyon". So I did. Someone's filmed the drive here (somewhat enhanced), but it really doesn't do justice to the vibrant landscape. I remember the old TV commercials for 'Twenty Mule Team Borax';  this is part of the road they drove from the Borax Works at Furnace Creek to the Mojave railhead. 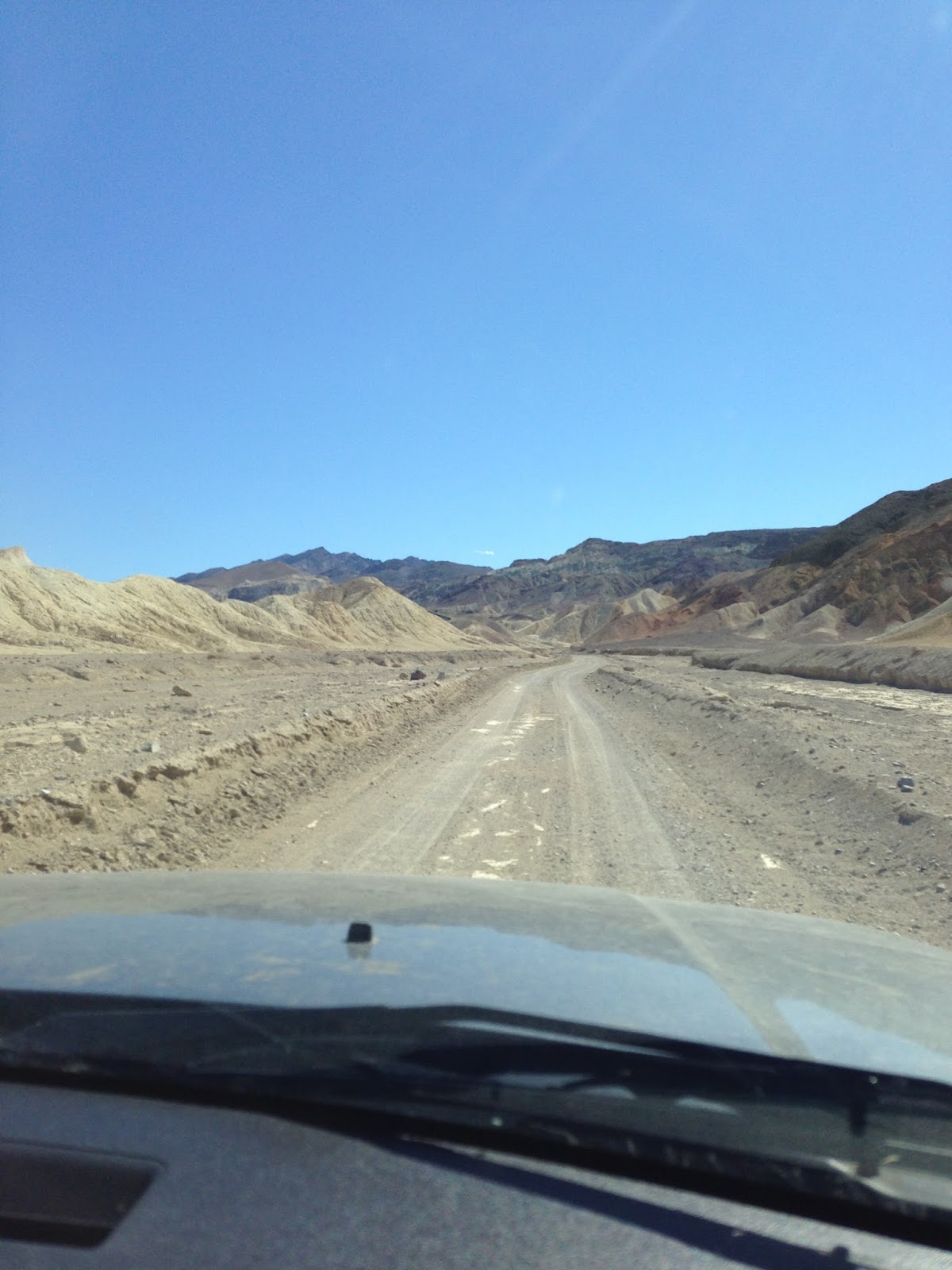 Not that impressive to start with, but it soon improved. 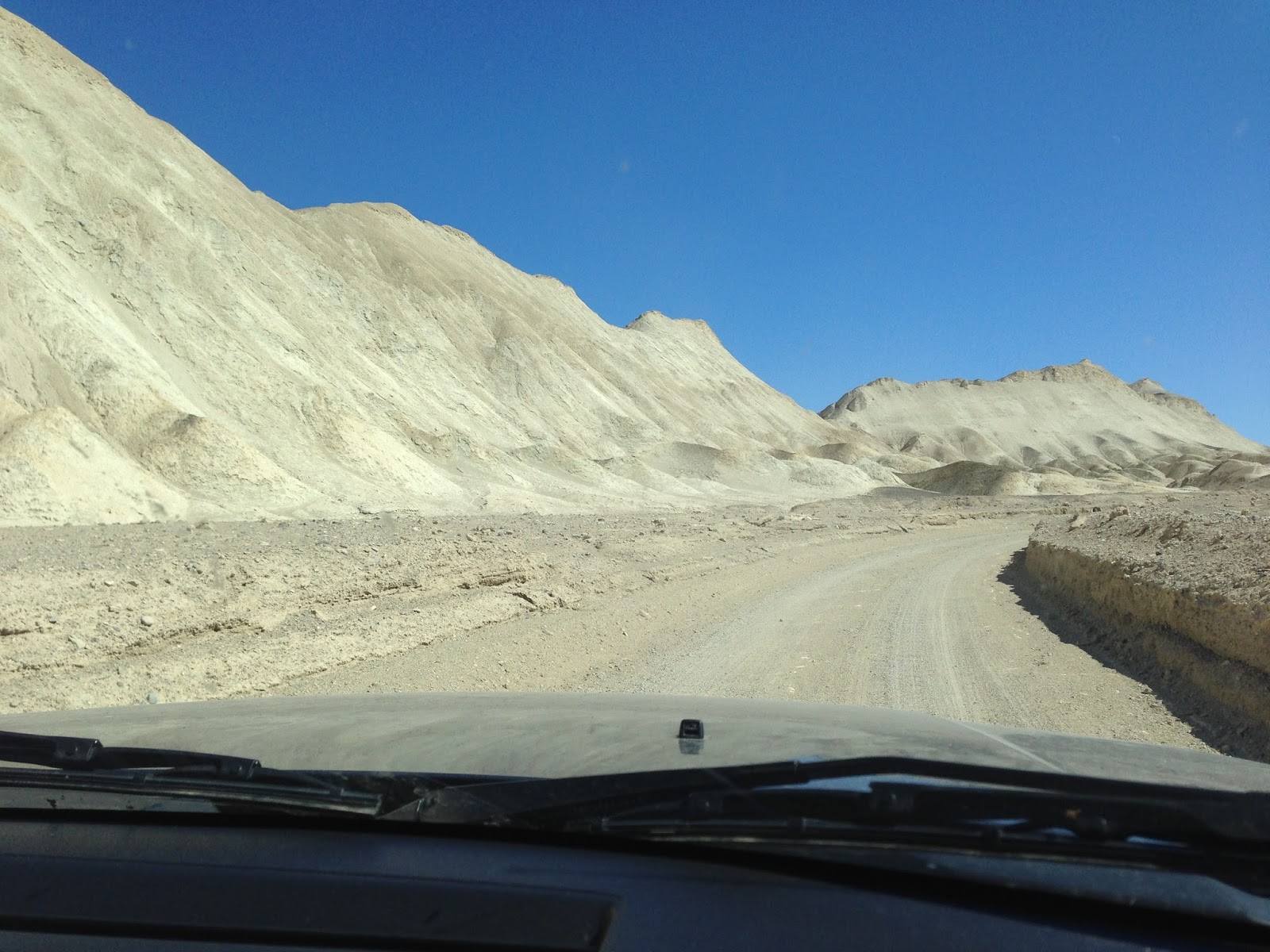 I pulled off the road and we walked into what was beginning to resemble a warming oven. Not uncomfortably hot, but noticeably warmer than anything I could remember experiencing before. 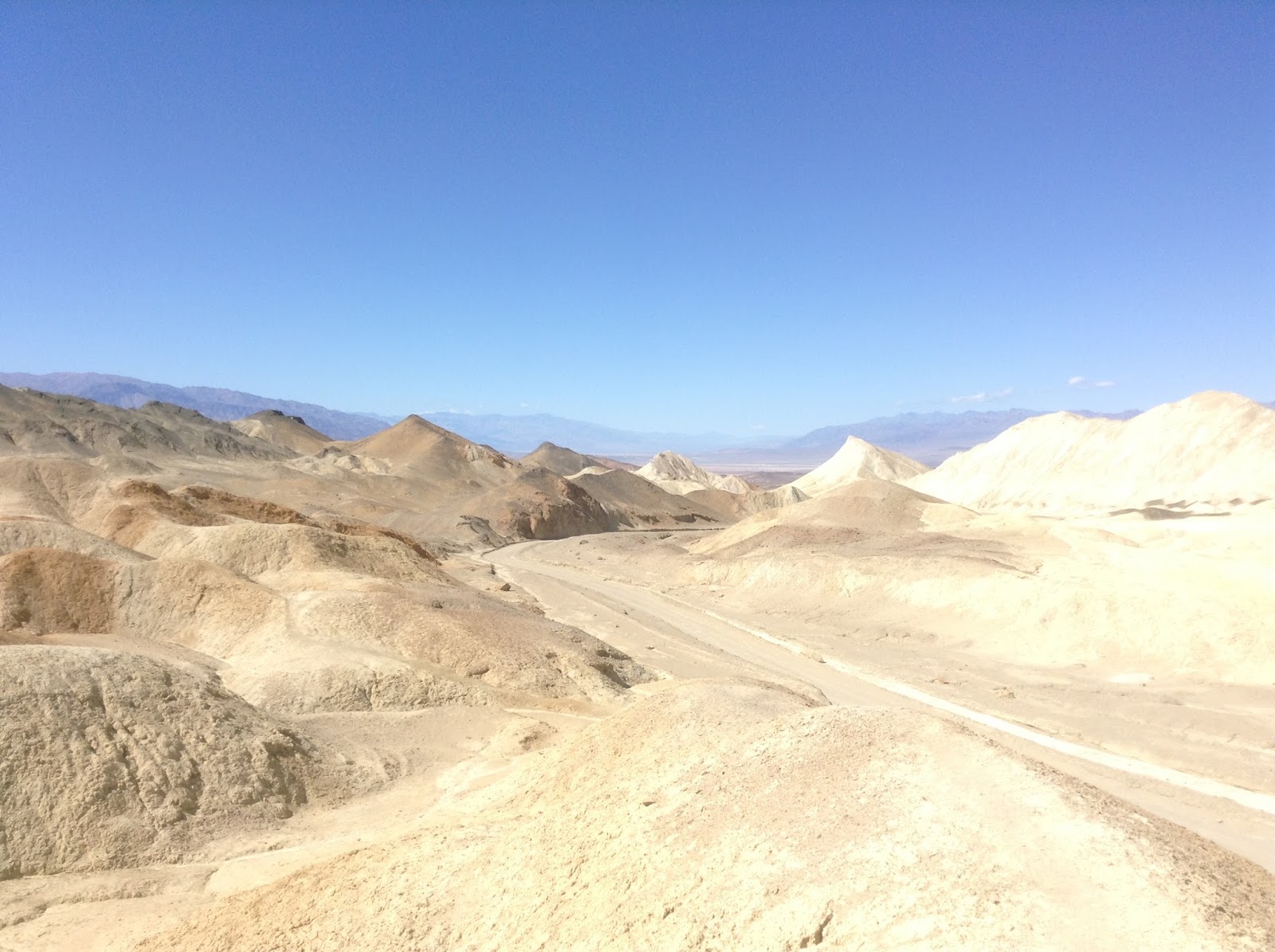 It intrigues me that many people (including us) find desolation to be beautiful. Three hundred years ago we'd probably have regarded it as terrifying. Quite literally. Only fertile green and pleasant landscapes thoroughly tamed by man were regarded as attractive. Perhaps our confidence in technology's ability to provide us with food, water, shelter and air conditioning has influenced our views.

Cinder cones visible a little higher on the hills tempted us to walk further. 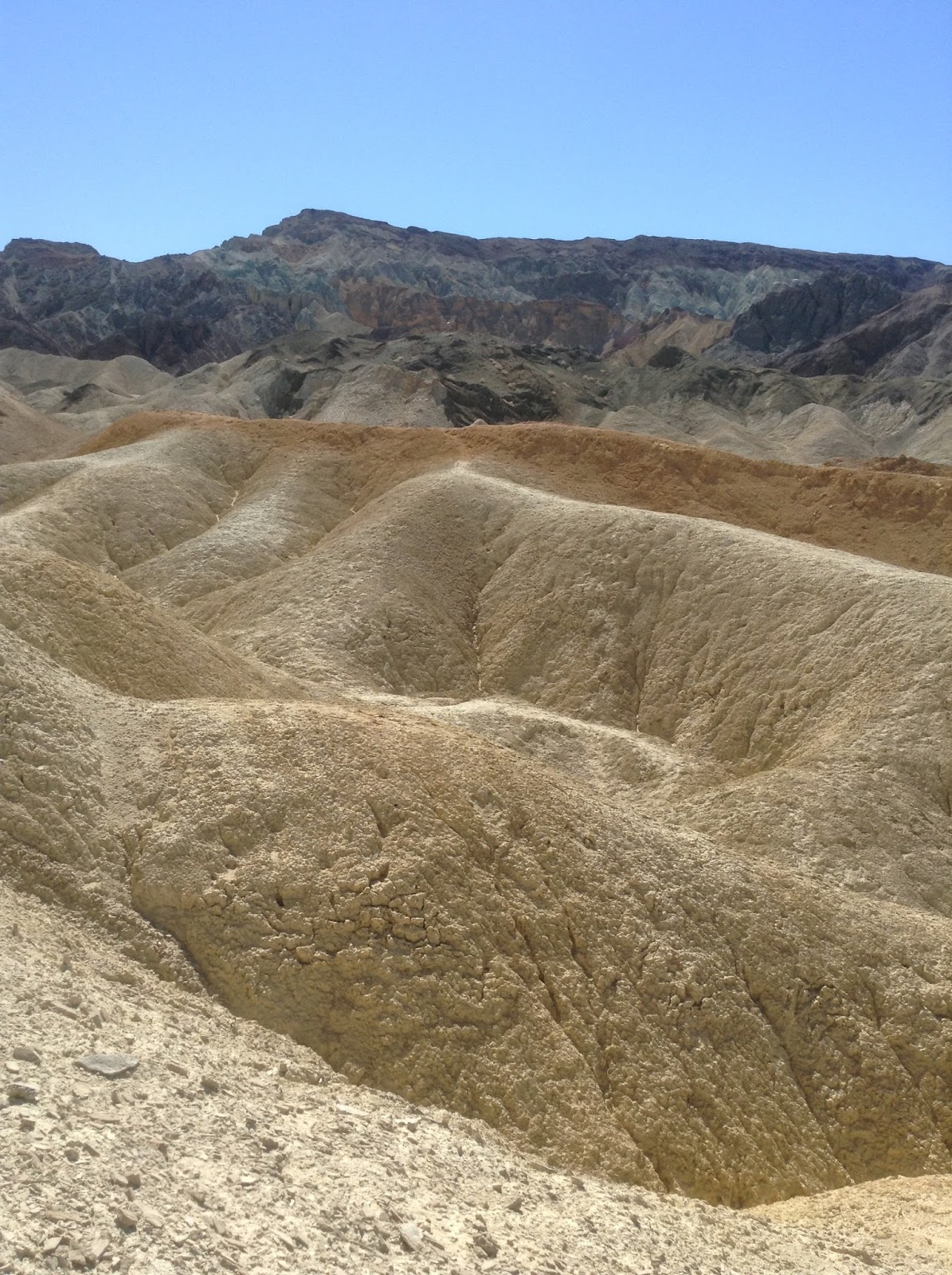 We started working our way up the gulleys, but soon decided it would be unwise to go further. It was definitely hot; we don't have any experience coping with heat, and we'd left the heavy hydration packs in the car, opting instead for a water bottle in my bag, and that was not enough. Besides which, there were other things to do this afternoon. We admired the fragments of cinder visible on the ground at our feet and headed back to the car, promising ourselves another, longer visit here. 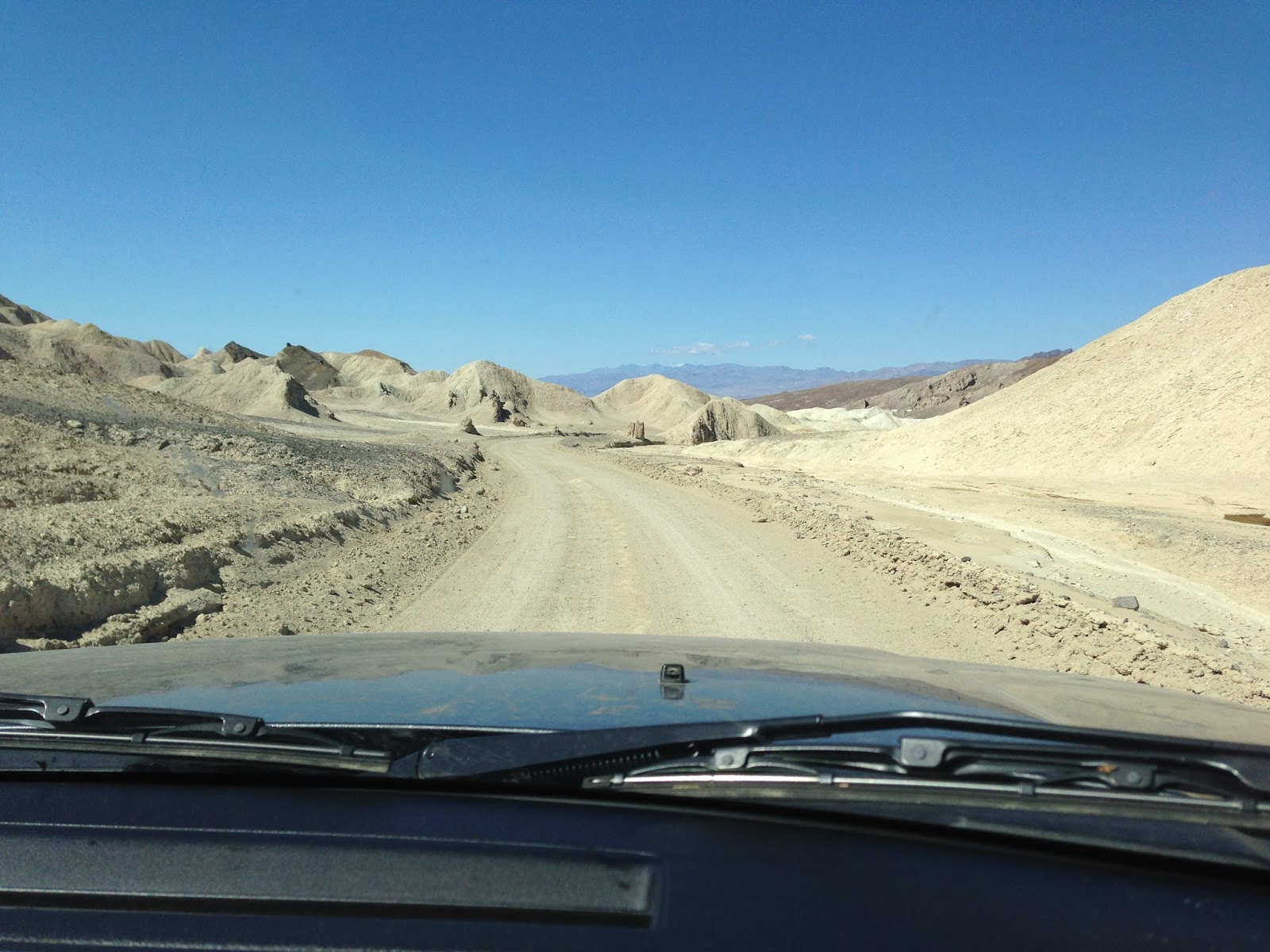 On to Dante's View. 190 runs along a valley, the interface between two sets of opposing sediment fans. The road to Dantes View takes us west, gently but steadily uphill across sediment fan gravels. 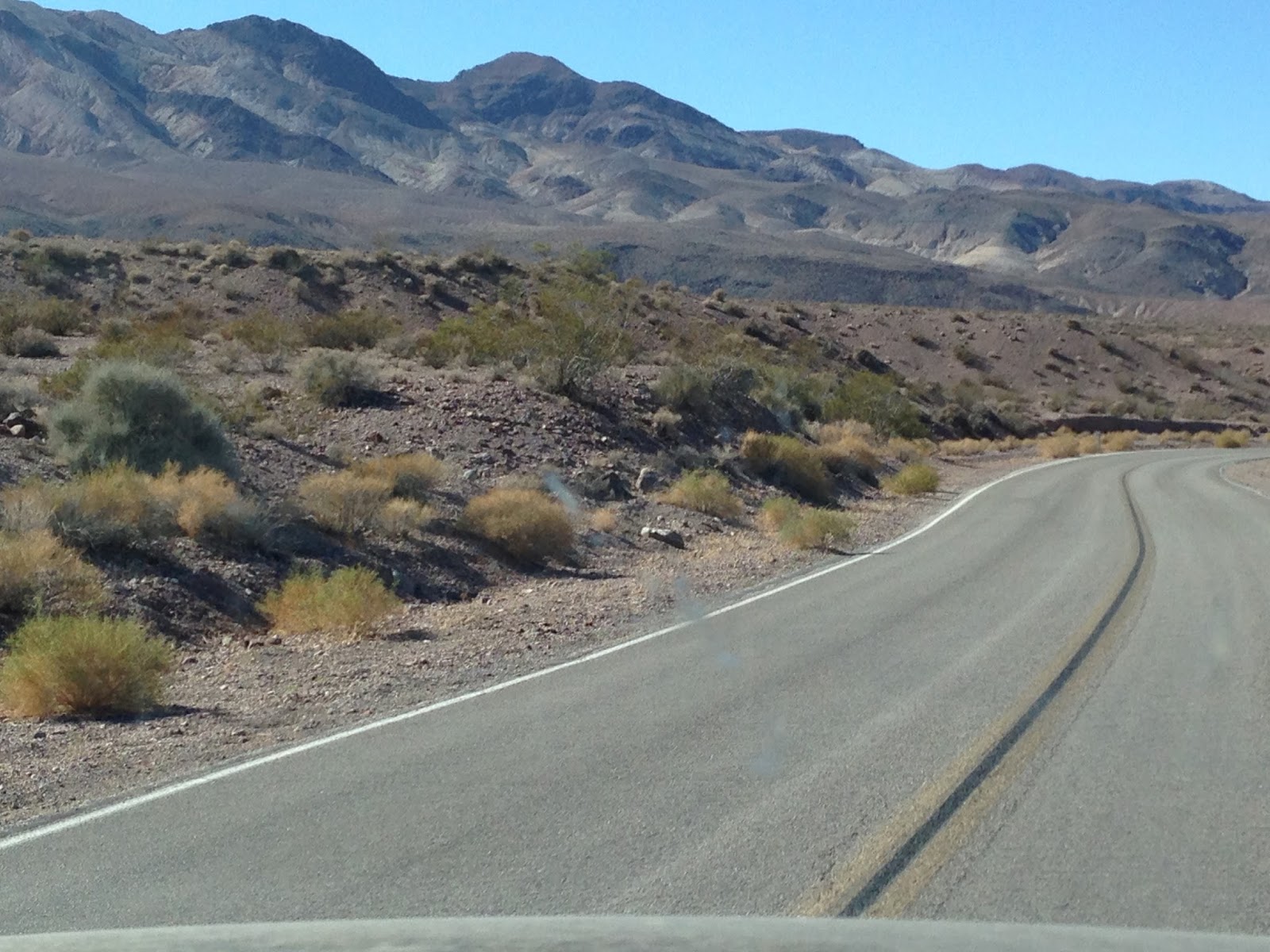 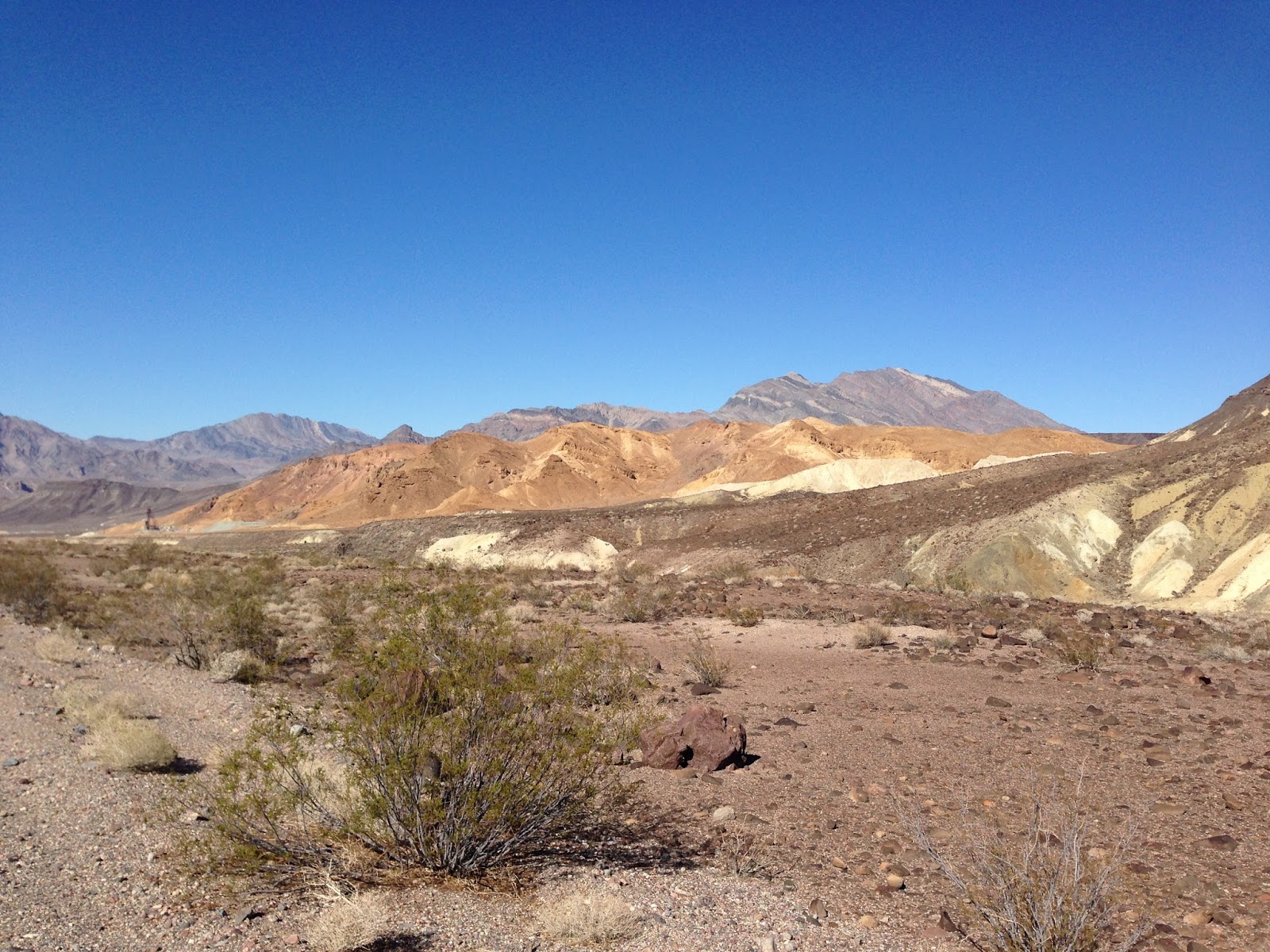 Past places where it looks as though the road has washed out in the past. Past the site of the Billie Mine, an underground borax mine that for over a decade was the only active mine in Death Valley. It closed in 2005. Past strange gleaming rectangles on a distant hillside (no photo), which the internet says is Ryan. Founded as a boron mining town, became a hotel, may become an educational centre. Past a trailer parking area. The road grows steeper, and I pull over to allow faster cars to pass. We chunter slowly ever upwards and now the road is off the sediment fan and winding through the hills. The hilltops grow nearer, signs warn of a 15% gradient. I pat the dashboard reassuringly: gradient, we can do gradient. Round another bend and I can see the switchbacks. Oh, no. Look at the road, nice solid road, not the drop. Don't look at the way the hillside just disappears to each side of the road, look at the road. Nice road. I talk myself up, all the way to the parking lot at the top of the hill. Once parked, I gingerly approach the front of the car and discover I'm about 6' short of the curb, when I could have sworn I was about to drive off the edge. In my defence it's a very spectacular edge, 5700' above the Badwater basin. 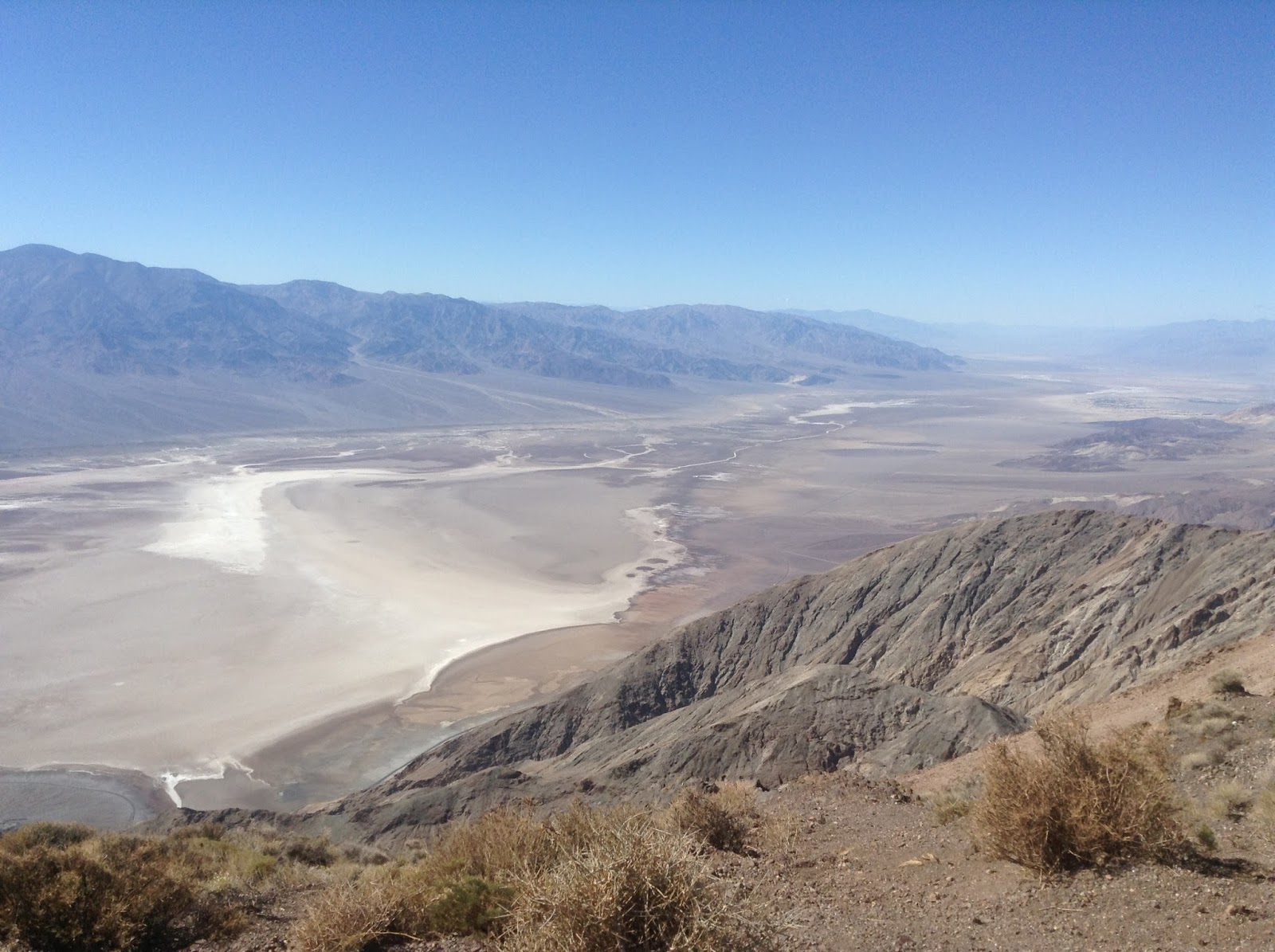 A. blithely set off for the lower viewpoint, while I chewed a ginger candy and waited for the vertigo to subside. The view is well worth the price. It's stunning on this cloudless day. I can see Telescope Peak and Wildrose peaks in the Panamints across the valley. If I creep closer to the edge I can see down, down, down, the broad track beaten into the mud of the lowest point in the US that we saw last night. No photos, the phone might have slipped from my sweaty little hand. 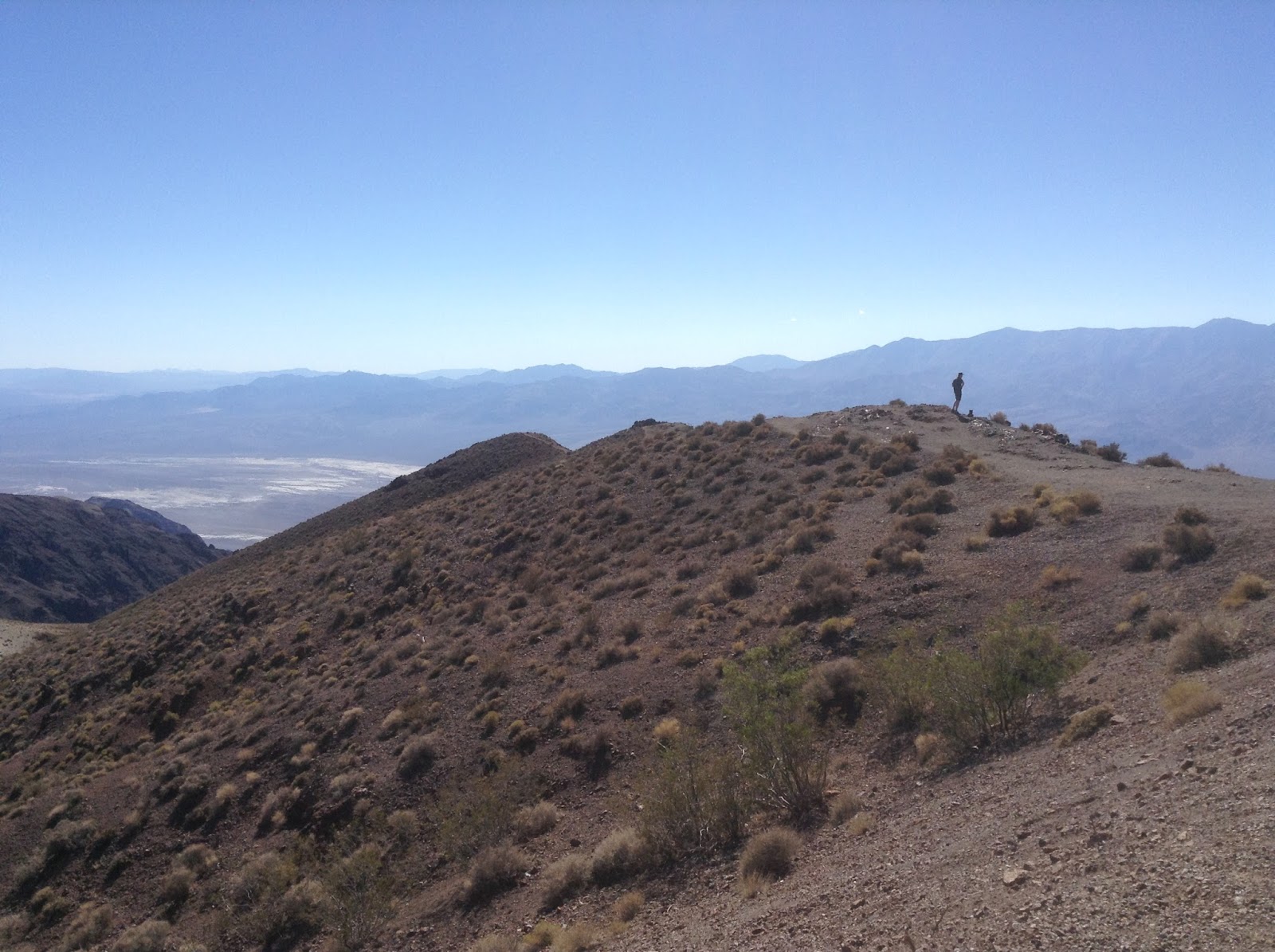 His panorama of the view: 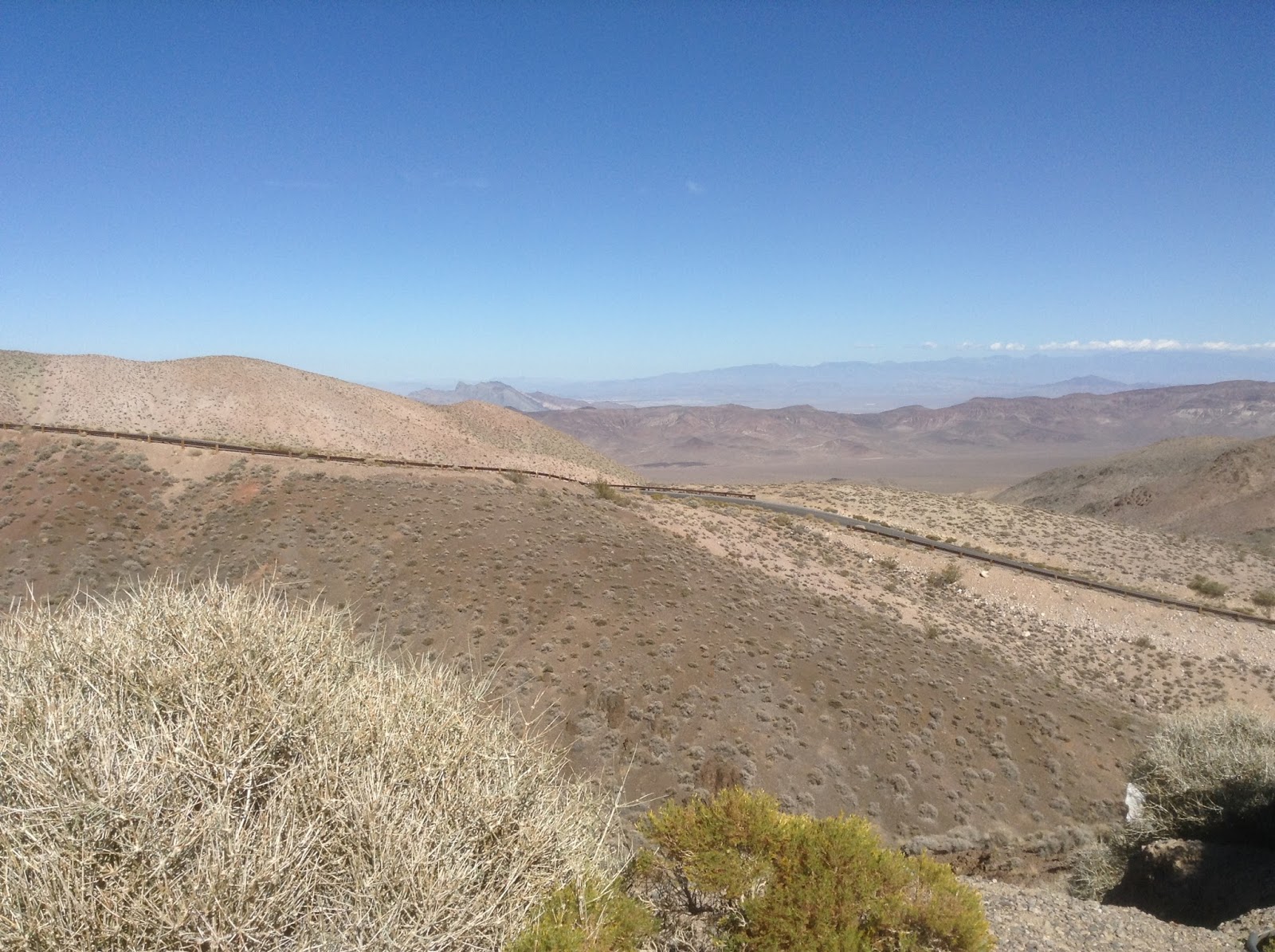 The road up, viewed from the parking lot. Left me wondering what my problem was, until I drove down it.

Back down the hill and north on 190 discussing what to do now. Zabriskie Point is best viewed at sunset, when the low angle light accentuates the landforms and adds colour, but after seeing how busy it was at midday, sunset seems likely to be sardine time. Not worth the trouble. We opted for a visit now before returning to the ranch.

Panorama strikes again. It works, though.

From 12 to 4 million years ago, the faults that define the Death Valley were particularly active. The Panamint range slipped north and west, allowing the Death Valley basin to slip lower. Volcanoes associated with the movement produced ash and cinders that were deposited in the basin. Beginning about 2-3 million years ago, during each Pleistocene glaciation water filled the basin to become Lake Manly; 22,000 years ago, Death Valley was a lake up to 585' deep and 90 miles long. The colourful landscapes of this part of the Black Mountains – Artist Palette Road, Zabriskie Point, 20 Mule Team Canyon – were created by erosion of the layers of cream, gold and brown ash that sat, compressed, under water until the glaciers and Lake Manly, which relied on their meltwater, disappeared. 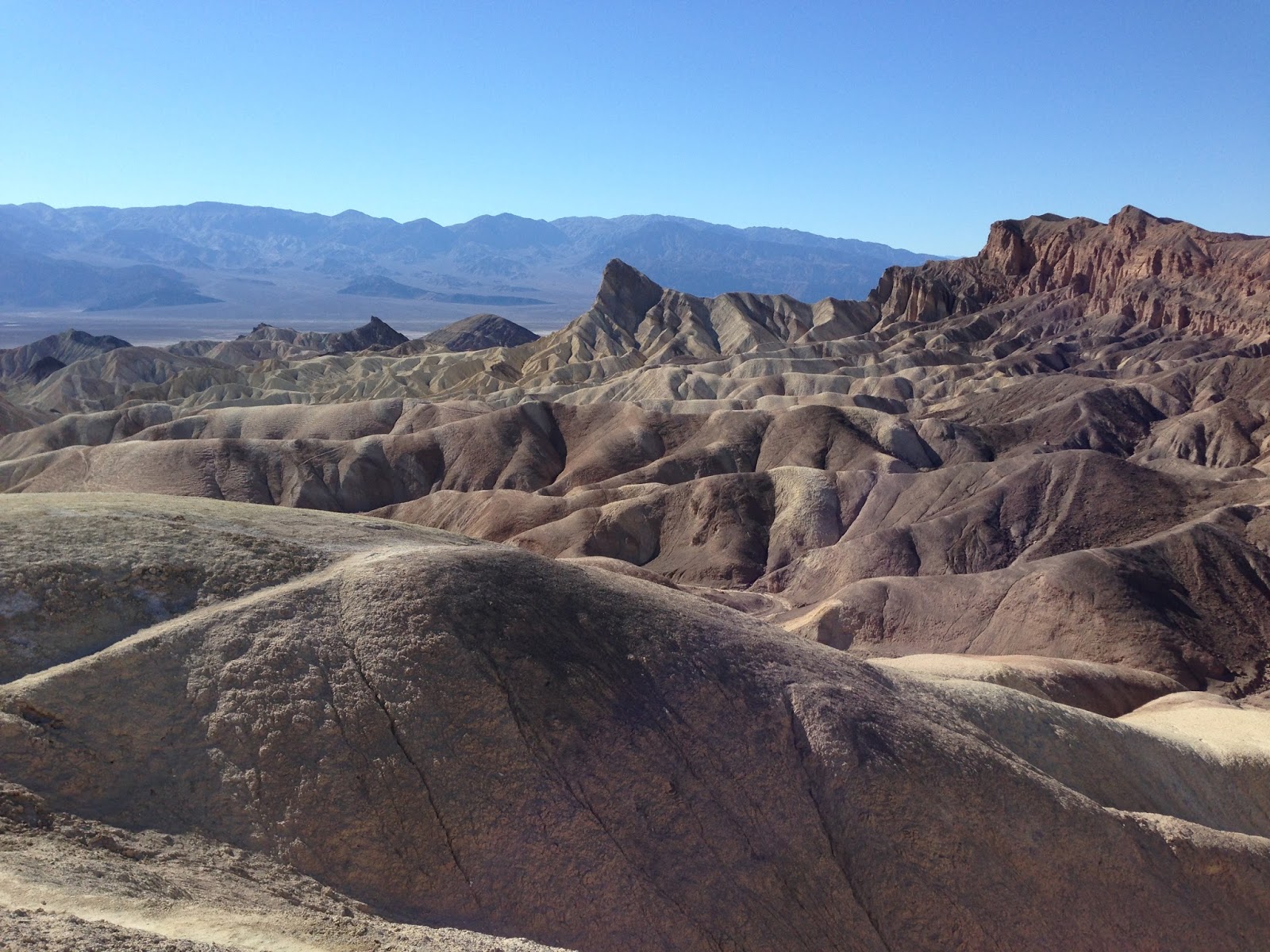 Back to the ranch, shower, and dinner (at the bar rather than the restaurant, a good choice). After dinner we skipped dessert and headed out once more. Death Valley is is a first class Dark Sky Park: we wanted to see the stars. But where? A. suggested the parking lot for the Harmony Borax mines as nearest and least bother. The western sky was still gold and blue when we arrived, but it darkened fast. 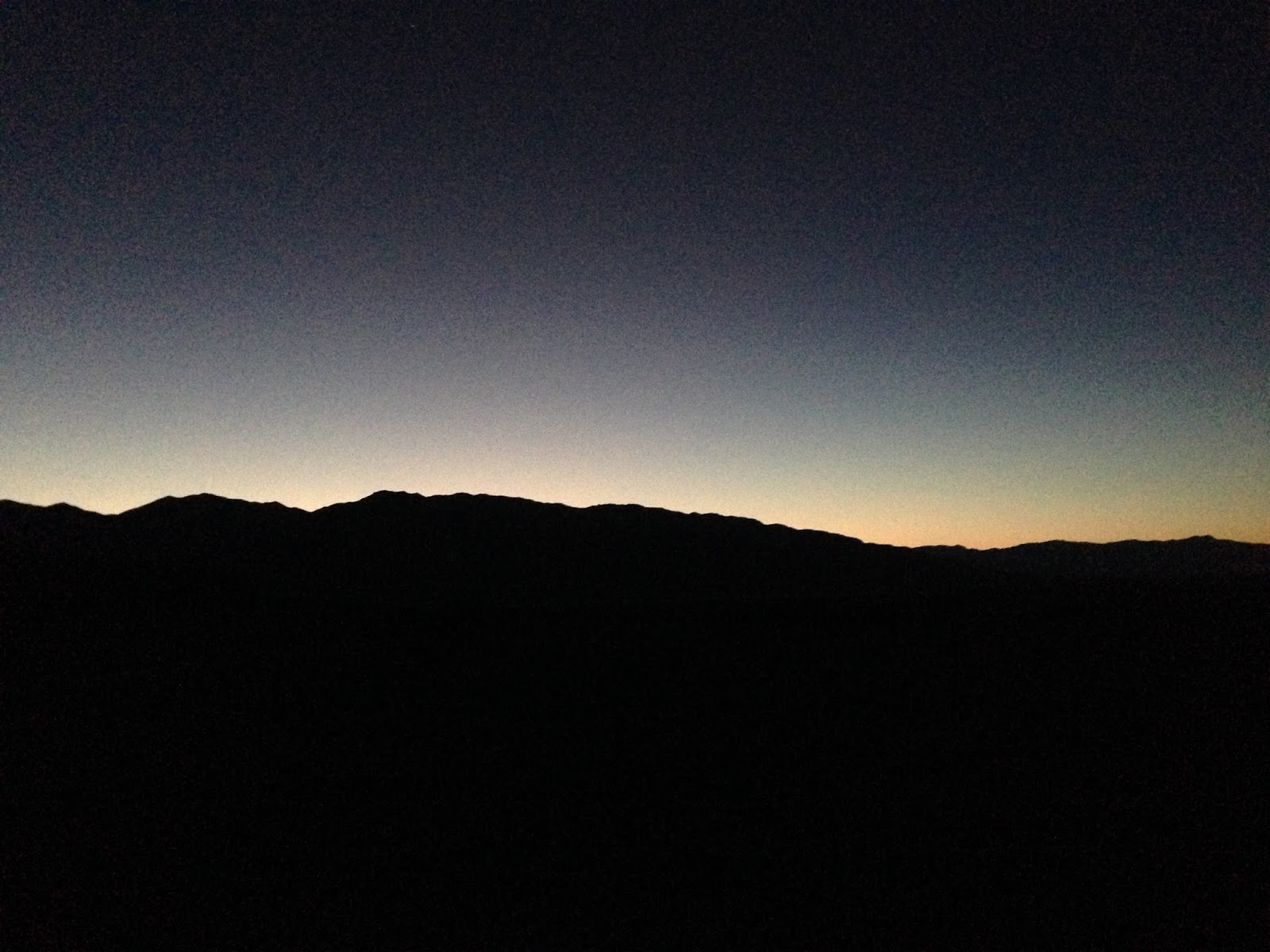 We lay on our backs on the parking lot, our heads resting on the concrete bay markers, and watched as the stars came out singly, then in groups and then all at once. Sadly the nearly-full moon was exceedingly bright, although I found I could block it with my foot if I held my leg up … just … right … there! The headlights from cars speeding along 190 were an additional distraction. But these were minor things by comparison with the warmth(!) of the tarmac under our backs. The silence, and the joy of watching tiny sparks emerge from the midnight blue sky. We saw satellites, A. saw meteors! We have to go back. We have to do that again.

How fabulous again. And good point about finding the desolation attractive - yes, surely the ability to enjoy it safely has lots to do with it.