As we walked past the tourist tat along Fisherman's Wharf yesterday, we noticed several bike rental companies advertising 'Bike the Bridge!': ride the bike paths across the Golden Gate Bridge and return via the ferry from Sausalito. It seemed a good way to see the sights (and earn a meal), so after pastries and coffee this morning we made our way to Blazing Saddles and rented a couple of hybrids. We normally ride road bikes, so the upright posture was just plain weird; we vacillated between missing cleats (less power on hills!) and being very, very glad we could just take a foot off the pedal and put it on the ground. That last was essential, what with pedestrians and people taking selfies (I saw someone with a camera-onna-stick to make an even bigger ass of himself) and a lot of people who foolishly believed they had not forgotten how to ride a bike over the last 30-odd years.
A. at the start in  Fisherman's Wharf, looking almost keen. 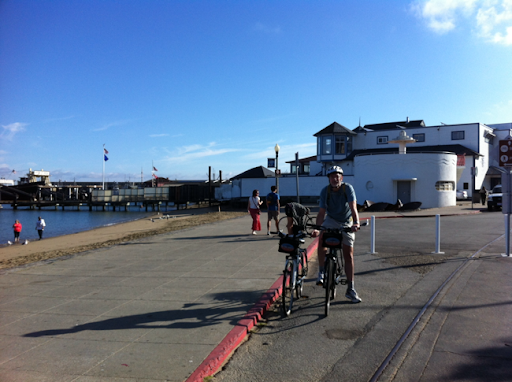 It was another glorious day. 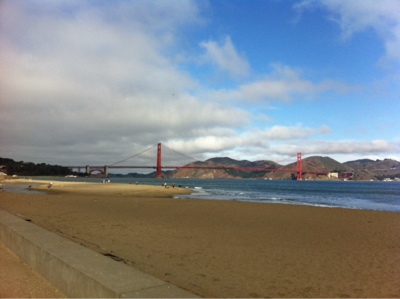 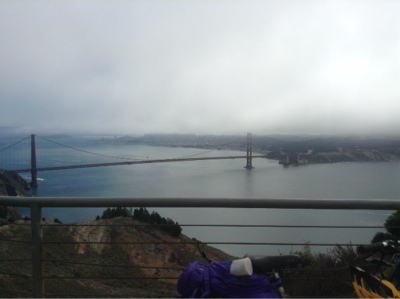 Then headed uphill (BOO! lack of cleats) and across the bridge on the Bay/east side, packed with people (YAY! lack of cleats, also bell on handlebars. I have never used one in anger before.) We stopped halfway for a celebratory Haribo (a candy beloved by European cyclists) and decided that rather than head down to Sausalito and the ferry, we'd head west onto the Marin Headlands in search of landscape and views.
Clearly there would be some climbing involved, but nothing ventured, nothing gained...
Ha. Some climbing indeed. I cursed our keenness as A. disappeared up the hill. I flipped the gear lever time and again, hoping that another, lower, gear would magically materialise. I sweated copiously, I danced on the pedals, I sat on the seat… nothing made it any easier. Stopping was good. At least my lowest gear was low enough that I could start again from standing. I had to stop to take photos, right? 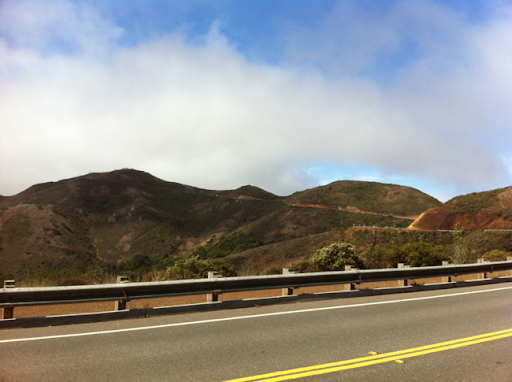 Eventually we reached Hawk Hill, where our persistance was rewarded by an encounter with the coolest, most beautiful bike I've ever seen, and its owner, Jack,  who was also rather cool. 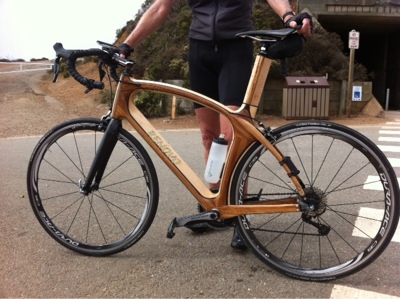 Yes, the frame is wood. Fiddleback maple, wenge, and zebrawood. I had to stroke it: that shape demands to be appreciated by hand. Look at the time-trialling shaping where the frame envelops the back wheel  … utterly gorgeous. Jack organises the Pacific Coast Century Ride from San Simeon to Carmel, and by the time we parted (he went downhill to Rodeo Beach, we wheeled our bikes through the tunnel to walk up to Hawk Hill), we were almost regretting we didn't live near enough to ride it.
We admired hawks and rocks 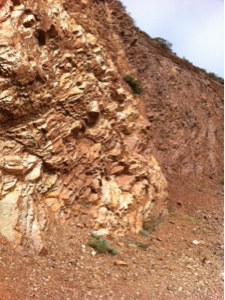 I think this is radiolarian chert, a deep-sea sediment contorted and raised high above sea level by the earth movements associated with the assembly of California: a series of exotic terranes ramming into the coast, one after the other.
We split a Mars Bar for a sugar high, then rather tentatively attacked the long descent back to the bridge. I have never ridden a descent that long and steep, and was awe-struck by the bikers racing past us. Practice makes perfect, I suppose, but on this first attempt I just worried that the disc brakes might melt!
We returned the bikes, then headed uphill and west again, walking along Chestnut into the Marina district to find Fleet Feet so I could buy new trainers. My old favourites, which have seen me through many adventures – pounded miles of London pavements, walked through several SOARs, post-holed early snow in the Sierras – are very nearly dead. I hope to deliver the coup de grâce in Death Valley, but needed to have their successors in place. Chestnut is one of the streets that becomes too steep for cars: 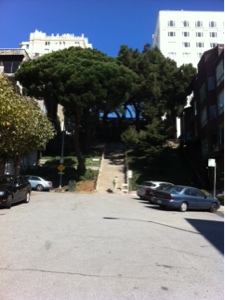 The road stops dead and steps allow pedestrians to ascend or descend to the next level. Cars have to go the long way around. And then we bought unguents to soothe our sunburned arms (at least we'd remembered to put sunblock on our faces and necks), ate an amazing dinner of Chicago pizza at Cabo's, and retired back to the hotel to digest it.
Tomorrow we head east to the foothills of the Sierras, to spend a day or so with good friends. After that, a tent-cabin in Yosemite! Further reports as and when we next have have wifi.

One of these days I shall follow in your footsteps - I've never seen Yosemite, for one thing.

This whole story is lovely - but that bike!

I wouldn't want to bike that hill on a bike I don't know! Or on any bike, really. We drive very carefully up that road.