Another day of Memorable Food! Yesterday proved unexpectedly long and stressful, as our flight south did not leave Victoria until after the time at which it was supposed to land at SFO. The wait to collect our bags and Customs clearance (they didn't object to the seaweed), plus rental pick-up meant we didn't find our way onto 101 into the heart of SF until after dark. Not fun driving a big vehicle (even a mid-size SUV Jeep is big by comparison with our cars in the UK) on the wrong side of the road after dark. But I'd practiced it on Google  Earth, had a map and GPS on the phone, and we made it to the hotel on Columbus  a bit stressed but without major problems albeit about 3 hours later than planned. Late enough that we were grateful BurgerMeister was still open (lovely chicken club sandwich and Anchor Steam), although they were cleaning up as we ate.

This morning probably dawned bright and promising, but we were not awake to appreciate it; I woke at my normal 0500, but went back to sleep. At 0800 we headed north to Fisherman's Wharf to begin a meander south to the Ferry Building to meet FOAY friends. The weather was still bright and promising, and remained so all day (colour us sunburn red :) 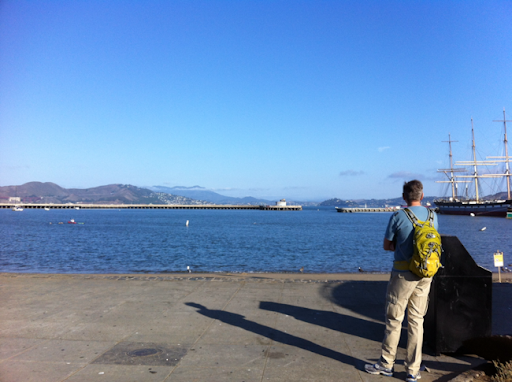 A. looking north to Sausalito at Fisherman's Wharf.

We walked through acres of tourist tat – shades of Oxford Street! (but more fake jade and candy) – before things became more interesting, with the refurbished cargo terminals and a giant cruise ship, a floating apartment complex looming over us. There were striking artworks around the Exploratorium, not to mention someone using a Segway In Real Life. We arrived at the Ferry Building  with time to spare, sitting in the shade outside Frog Hollow eating nashi pears and fresh bread from the Acme Bread Co. before returning to meet the people we were there to meet (you know who you are!).

We hugged, we talked. We talked about fibre. 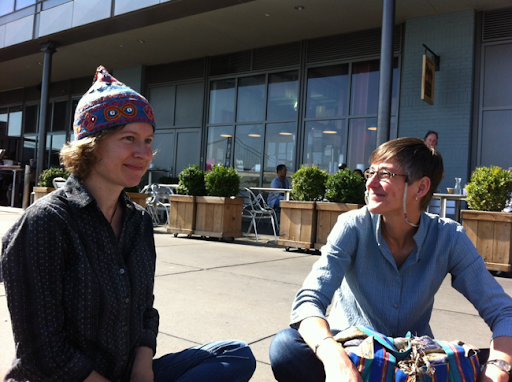 We split into parties to gather food. 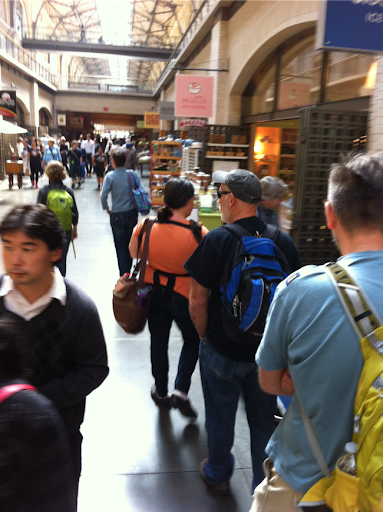 We reassembled in the park across the street to eat the food and talk more (hungry work, this talking). 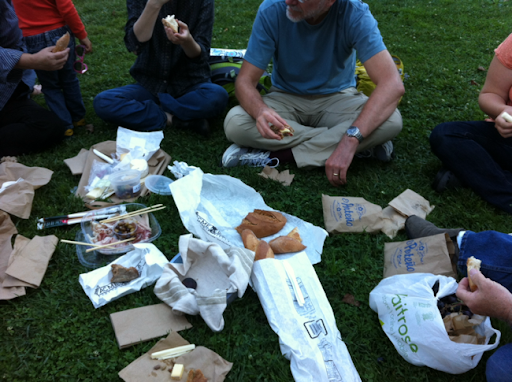 (We travelled all the way from England to bring that Waitrose bag to SF). There was superb bread and cheese and salted pig parts and olives and FRESH FIGS . 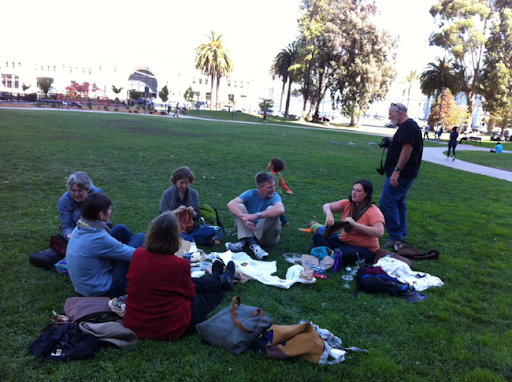 There was laughter and talking and quite a lot of running in circles (although that was mainly the younger contingent). There was an adjournment for affogato and more talking and spinning (the strange group of women sitting in a row doing things with sticks and string will feature in various tourist photo collections: we were photographed several times). One by one people left until eventually it was me and him and Pat, and then it was just us. We walked, found the Levis building (and bought jeans) and walked, found Tony's Pizza (decided against waiting 90 minutes for a table) and walked, and found North Beach restaurant. Another Memorable Meal! With a Zinfandel from the winemaker whose California Chardonnay blew the French away. And then we walked back to the hotel, and bed. 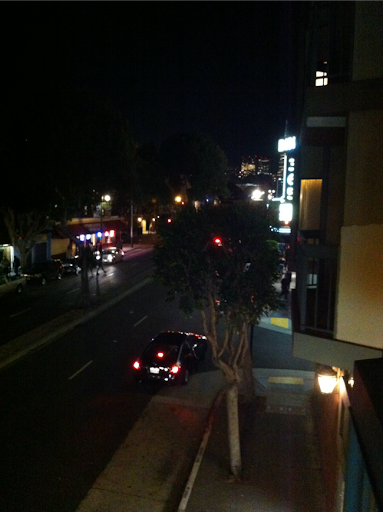 The view from our teeny tiny balcony,

Oh, so much fun! I am so jealous you got to meet the Cailfornia contingent, and that they got to meet you.