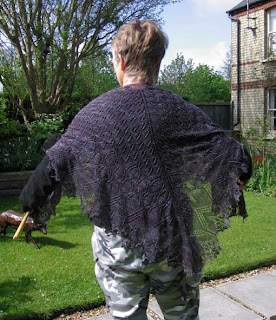 RIP, Aeolian Shawl
Physical and mental. Let's get the mental over first. In short, my cunning plan proved to be a turnip: yes, a hammer trumps a bead every time (ok, might take two or three careful blows) but, where my trial beads turned into glittering dust, those on the shawl shattered into shards. Sharp ones. After cheerfully demolishing about 20 beads I realised the fragments had cut the yarn in two places. I repaired them, but BMFA Silk Thread II is, well, silk: it doesn't stick to itself, it's thin and shiny and the repairs are visible). However, I was committed, so I continued much, much more carefully - the next c. 100 beads required only two more repairs. I sat in the sun with my heart sliding into my socks as I realised that, at this speed, I'd still be breaking beads in two weeks' time, and the shawl would be a higgledy-piggledy mess of repairs. I looked at that beautiful silk gleaming in the light and realised that my selfishness had ruined that shawl and wasted weeks of my precious spare time. After all, if I didn't like the glitter, I could have given it to someone who did. But no, I wanted that lovely yarn, that shawl sans beads for me. Therein lies the anguish: I was Stupid. And now I think no one will have it, even though after I announced that I'd binned it the Tsocksarina decided to attempt to salvage something from the wreck. As soon as its chaperones arrive (no knitting can travel unaccompanied) the mess will be on its way. 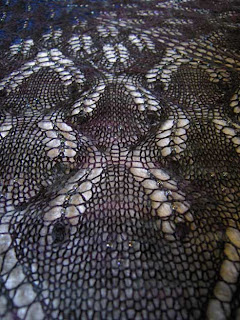 I distracted myself from the mess by casting on for a hat in my handspun. It's still a novelty, knitting yarn I made myself. I used the 'Come in Spinner' Polwarth from the first installment of the Socktopus Fibre Academy, which I'd spun as a thick 3-ply. I'd known it was more worsted than I'd wanted, but only when I started to knit with it did I realise just how 'solid' it was. It's made a very... sturdy... hat. Weighs about twice as much as any of our technical gear, so it will not come on long treks, but it's pretty. And, alas, too big for me. Suits him, though: 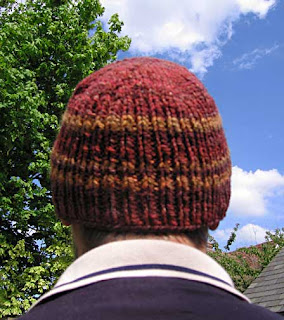 Then there's the physical anguish. We did it to ourselves, too. The weather forecast was good, dry but cool, so on Friday evening we pulled the Big Packs out of the cupboard and packed them with almost all the stuff we'd be carrying in Scotland (mine weighed 15.5kg, about 35lb), and at 0630 yesterday morning we threw them (figuratively speaking; they're far too heavy to throw!) with the rest of our walking gear in the back of the car and hammered up the M1 to our nearest hills in Derbyshire. Again. After discovering that the concentration needed to do Emily Ocker's circular cast-on with two circular knitting needles instead of a crochet hook in a car travelling on a winding road left me feeling distinctly poorly, I didn't get a lot of knitting done! But by the time we reached Chesterfield I had the map open and was formulating a plan. It went something like this: arrive Edale, park, start walking. Good one, eh? It expanded to: arrive Edale, walk up to path along Rushup Edge, 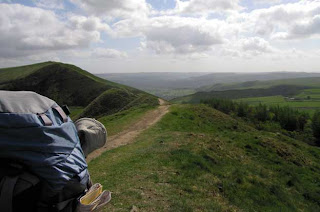 Above, the view east along Rushup Edge. Mam Tor on left above my pack, Castleton at right.
Below, the view north to Edale village and the Kinder plateau. 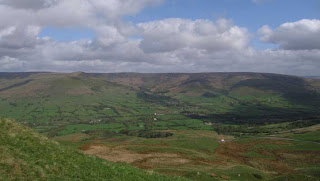 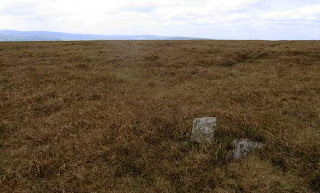 This Boundary Stone inscribed '1748' lies on what fell-runners say is the driest line along the top of the moor. They're probably right, but it was wet nonetheless. And I finally tested the depth of a bog hole: only 18" or so in diameter, it was nearly 4' deep!
stop for lunch in the shelter of a quarry and stone wall (the wind was cold!), strike west along the flank of Kinder, then north until we had to decide: take the 'easy, short' path that slides up the western slope to the top of Kinder, or carry on around Kinder Reservoir and up William Clough to the far northwest corner of the plateau. For several minutes we fidgeted, thoughtfully shifting the packs on our shoulders, trying to balance time, pack weight, energy level, distance and knee condition, before basically saying 'Sod it, we can eat at McDonald's if the pub is full - let's go!' and committing to the lunacy of the longer route. Besides which, we were carrying tent, sleeping gear, water filter, stove, fuel, and food for 6 days. We could take our time.

click for bigger...
So we took the path in the left of that panorama over the lovely soft green dotted with sheep and lambs, down the hill to the reservoir, along the baking hot path on the other side to the start of William Clough, where we realised there was Another Choice: an unofficial path heading straight up the side of Kinder. It would be shorter, no question of it, but it was much steeper. Time was pressing... I'm really bad at uphill; given my pauses for breath (remember I'm carrying a 15kg pack!), would it be faster than the Clough? Nothing ventured, nothing gained: we headed up the hill. Unfortunately, while pausing allows me to catch my breath, it does little to persuade my duff knee to pull itself together and by the time we reached the top, I was hurting. But the view was... ok, no, it wasn't worth the pain. Not by itself. Add the sense of achievement and the two together were worth it :-) 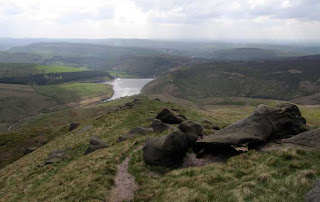 The view west from the top. Good but not quite good enough :-) The panorama was taken from the top of that long green hill above the dark trees on the left of the picture.
The familiar Pennine Way stretched ahead of us and we did our best to set a good pace past Kinder Downfall to Kinderlow, (but were scarcely able to stay ahead of the school groups. Oh, to be 16 again!) then left on a minor path to the main path running along the southern edge of the Plateau, high above Edale. The late afternoon sun revealed a wealth of detail on the hillside south and west of us; 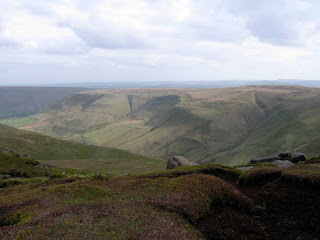 The ridge in shadow to the left in the distance is Rushup Edge; in the middle distance is Brown Knoll. The blanket of peat on the flattish top of the hill is clearly visible, broken up at the edges by erosion and by old peat cuttings. You can also clearly see some of the post-glacial landslips for which Edale is famous.
As we strode, kneesore but determined, we discussed the best route down. The plateau stands about 300m above the floor of the valley; given the weight on our backs and the condition of our knees, were we better trying to lose height as quickly as possible (the c. 75° drop down the rockfall of Grindsbrook Clough), or more slowly (the unfamiliar path down Grindslow). We opted to get it over with and paused for an SIS isogel (those things work wonders when you need a quick boost of energy for a specific task) before carefully making our way down the rockfall. The energy ran out about halfway down the path to Edale, but it didn't matter, we were down. End result: over 15 miles/24k, roughly estimated, including more ascent/descent than we're likely to encounter on any day on the Sutherland Trail. Conclusion: we did it; we can do it again. Barring accidents, we're up to the task, in every sense.

Oh, the trials we put before ourselves in life! 'Twould be dull without them, I suppose.

Lovely shawl, lovely walk. Too bad about the trials associated with each.

It's sad that the beads didn't cooperate with your plan.