A project for the Cotswold.

The 'wrong fibre, wrong place' Cotswold now has ambitions, or more accurately I have an ambitious goal for it. I was whining on Ravelry about lack of desire/inspiration for the 2013 Rampton Project of a Fun and Frivolous Hat when …

Some weeks previously Sara Lamb had recommended books by Sheila Paine as of use to someone else; I thought they sounded interesting and worked my way through the travel trilogy (begins with The Afghan Amulet) and then acquired Embroidery from Afghanistan. So naturally I began a search for hatty inspiration by looking for various hats from Afghanistan online. Google images promptly gave me this link, which I posted to Ravelry because one shares the good stuff, right? To cut a long story short, Sara suggested I make a similar hat from fulled handwoven handspun. Good plan, I said, or words to that effect, despite knowing next-to-nothing about how such a thing would be made. An expedition to a local purveyor of New Age crystals and ethnic jewellery proved unexpectedly rewarding: it's a real one. Well-worn and faded: that pale orange was once fluorescent, and the pale grey-green was screaming lime. 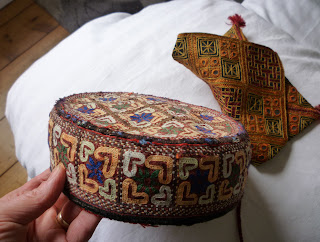 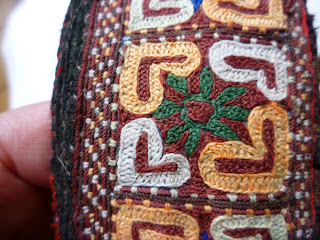 Close examination shows the embroidery almost completely conceals a blue woven cloth. I think a couple of layers of that are lined with other fabric, then quilted and embroidered. Most of the embroidery stitches are worked within the quilting. 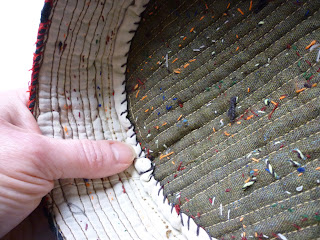 As always, I am moved when my hands feel the work of someone else's hands. Work, not art: an item made because the maker or someone she cares for truly needs or wants that thing, or the money that can be made by selling it.

Although I don't plan my hat to look much like that hat - it's a man's hat, to be worn with a turban wrapped around its sides, and sits foolishly on the top of my head - the women's hats are so ornate that I can't imagine wearing one. I am inspired instead by this child's hat. I doubt mine will look much like that, but it's a starting point.

To make anything I need cloth, and to make that I need yarn. 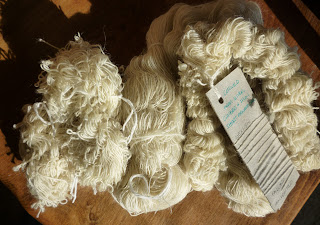 I had about 450g of the sliver, which yielded 171g of singles spun short forward draw. I've put 157m to one side in case I want to submit it as part of my work for the Guild of Weavers, Spinners and Dyers Certificate of Achievement in Spinning; that weighs 30g, so the remaining 141g should give me about 740m of warp. But what to use for weft? The combing waste was horrible, full of short cuts and nepps, dirt and dark hairs. I surveyed the stash. Not something precious, not my fine shetlands and other soft wools. And it has to full and/or felt, which ruled out the Dorset Horn and Southdown tops. I was looking thoughtfully at the BFL top when I remembered the Falkland. 'Falkland' is the wool clip from the Falkland Islands, originally Corriedale and Romney, now with Polwarth and some merino crosses.  Three minutes with soap and water told me it would full. So I spun a sample from the fold for a more woollen yarn (leave space for the fulled fibres to compact) to roughly the same grist as the warp (it looks thicker in that photo but that's because it's woollen). 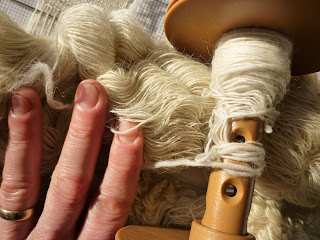 I've only once made a fulled fabric, and that was a tiny sample spun and woven for Stephenie Gaustad's 'Spinning for Historical Reenactment and Museum Replication' class at SOAR. I needed some idea of what these yarns will do together. How much might the fulled fabric shrink? What sett should I use? I used a straightforward sampling tool, another gift from Sara Lamb. When I say I am fortunate and truly grateful for all that my mentors have given me, I am totally serious. All they ask in return is that I use it: so I do, and I pass the knowledge on. 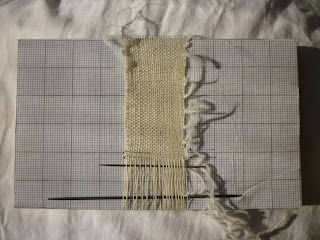 It's foamboard covered with graph paper, with pins along the top edge to space the warp. I use the knitting needle at the bottom of the warp as a heddle stick, holding the threads for one pass of the weft for plain weave; I needle-weave the other pass (using a heddle stick and beating with it gives better, denser fabric than needle-weaving alone). It's faster than you might think. I hemstitched the edges, then hemstitched to isolate 1/3 of the strip to be cut off and kept as a loom-state sample. The other 2/3 I fulled by hand on the kitchen counter this morning. 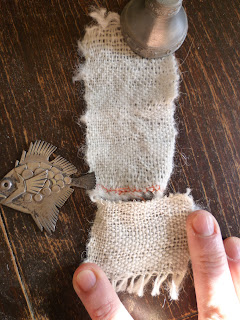 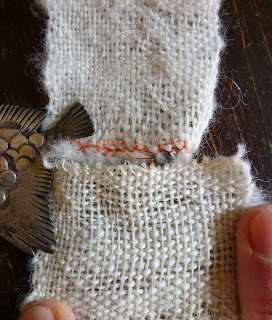 Although Cotswold will full slightly, the Falklands is much better at it: it's lost 1cm in width. The strips are oriented in the same way, with that slightly denser band down the same side. I like the fabric, I like it a lot. The overall sett is 34 ends/2", which is 17 epi. The denser areas have fulled to a tight plain weave; I have to check the loom-state sample/fragment (it's a very small sample!), but I think that's nearer 20 epi. If I use size to reduce hairiness and sticking in the warp I think I can achieve that lovely even plain weave fabric on the loom. So this tiny sample has told me a lot: my fibres do what I hoped and I have an approximate sett to make a functional fabric. I might put half the fulled sample through the washing machine to see how much denser it becomes after a normal wash cycle... but then again I may not. 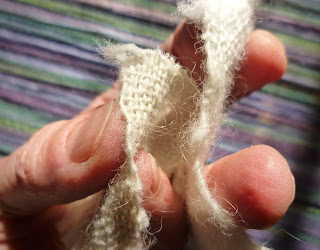 I don't know if this fabric will be ideal for the purpose, but I think it will suffice. It's not so thick and stiff that it will become cardboard when further stiffened by embroidery. It's soft, but feels hardwearing; I can imagine a winter coat or cloak made of this. It's fabric of character. I like it. And I'm so proud that I planned it from nothing and I made it real with my own hands.
Posted by sarah at 03:55

Isn't it amazing how a few square inches of fabric can get you all excited? Hurrah for a wonderful new plan!

What an interesting post! I shall be intrigued to see what you end up with. And I found Sheila Payne's books a while ago - I was at a show a few years back when she was promoting Afghan Amulet. (So strange, thinking that that part of the world used to be the centre of so much trade and movement, and is now almost completely cut off, largely but not wholly because of religion). Have fun!