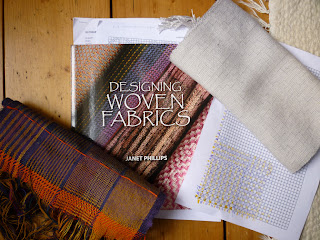 See? I'm keeping my word. Another post, to share my 'Natural Time Out' weekend weaving with Janet Phillips, and some of my thoughts about it as I drove home. I'll spare you the "oh, why aren't I there yet?" thoughts (four hours on the road is even longer after a long, engrossing weekend).

So. After I returned from the gym on Friday morning I did the dishes, the housework, packed, etc, and started the long drive to Somerset. After three hours of motorway driving at a steady 68mph in deference to the age of my car (the oldest car on the road by a long stretch!) boredom won, and I left the motorway for Chippenham. Southwest for adventure! 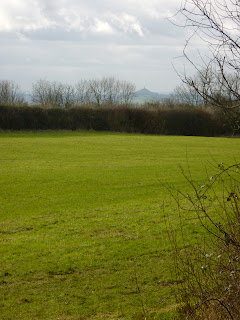 Glastonbury Tor in the distance as I drove. Well, as I stopped to take the picture.

I had intended to climb the Tor, but it would have been a rather muddy walk from the car park in the centre of Glastonbury and I was trying to keep my shoes clean, so I settled for a wander around town -  right back to the early 1970s, complete with the same incense! - and a visit to the ruins of Glastonbury Abbey. I was thinking about pattern and colour as well as history: 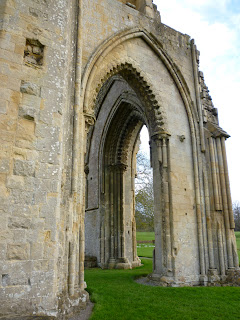 Lines and blocks: arches in the ruins 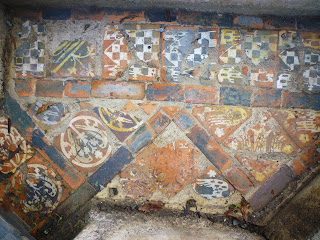 Medieval encaustic tiles, a remnant of the medieval Abbey floor.

The Abbey did not have the atmosphere I'd expected for such a famous centre of mysticism, possibly because it is so thoroughly steeped in patchouli. Crowland Abbey and Rievaulx both made much deeper and longer-lasting impressions on me. Anyway, from Glastonbury it's a straightforward drive to Nether Stowey. Past orchards (Somerset is famous for cider), and some very muddy sheep. I conveniently found the two together here; note the mistletoe on the apple trees. I suspect these are rams; one was definitely Texel, but the others turned their backs on me almost as I clicked the shutter. 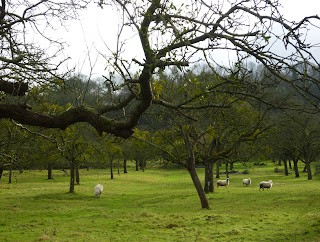 I checked into the Rose and Crown (Be warned, mobile reception is almost non-existent in the village. They do have wifi in the bar, but you have to ask.) and the next morning after breakfast I walked up the hill to the remains of Nether Stowey Castle in search of phone signal. 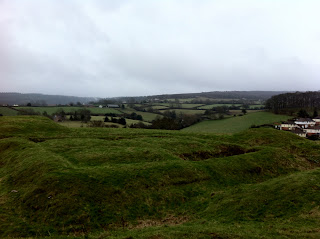 From the top of the Castle mound or motte looking south over the foundations of the keep to the Quantocks beyond. 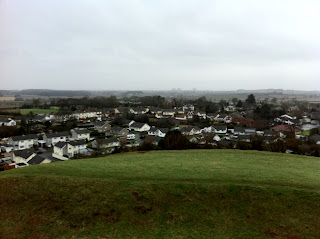 And the view north over the village, with the cooling towers of Hinckley Point visible in the distance.

And then it was weaving. I took full advantage of the fact I was Janet's only student on Saturday and Sunday (Tina arrived on Monday, and Amanda on Tuesday). I'd brought samples of my weaving to date, and Janet seemed genuinely impressed by what I'd achieved, particularly with handspun singles. I then laid out one of my favourite problems, an assortment of yarns I'd bought with a view to weaving fabric for a vest or other garment. 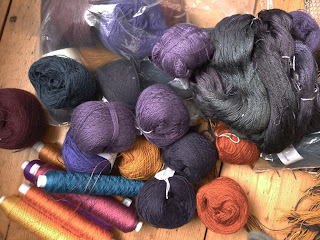 I'd chosen colours to complement some Blue Moon Fiber Arts silk thread, but even with the added lustre of the silk as weft (I don't want horizontal stripes in a garment!) wraps to test warp stripes looked like school uniform fabric. Uninspiring.

I'd thought of adding 60/2 silk in toning or contrasting colours to enliven the warp (sample wrap on left) and it seemed to work, but I wasn't sure how best to do this in a fabric, or whether differential shrinkage would lead to the silk popping out of the wool after washing. Janet said "sample", just like every other experienced weaver of my acquaintance - but this time I had to do as I was told. As I'd asked to wind a warp and warp my own loom because I'd learned what I knew from books and YouTube, I was guided through the process of winding a warp for a 'Colour and Weave Effect' sampler from the yarns I'd brought. Including 60/2 silk where I thought it useful. Beaming is so. much. easier. with someone to reassure me from time to time! Wind on with sticks to start with, then sections of vinyl flooring; I will have to try this again, as it was extremely easy to work with and, although using rough paper for the 'tooth' to hold yarns tightly makes sense, so does using a smooth surface to prevent damage to the yarn and ensure that a badly wound section can be improved by subsequent tight winding. I stayed late to finish the threading only to find I had two spare heddles. A quick check showed that the error, whatever it was, was near the beginning. I left, resolving to come in early to find and correct the error. The morning light revealed I was two ends short of one colour; I left two heddles for the ends and rethreaded the warp in record time. (I was almost genuinely pleased to have the threading practice. Almost.) I couldn't have picked a better mistake to make at this stage, as Janet was able to show me how to add warp threads when needed. So easy! Then tie on, weave a header to check threading and tension (take up slack if necessary) and I was away. 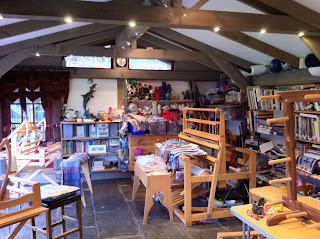 I used the Ashford 4-shaft table loom at back left, with a stick shuttle. On the dresser at right are cones of yarn and bins of samples, which Janet referred to almost constantly to answer questions or inspire thoughts. 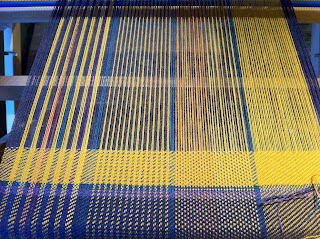 The sampler on the loom at 28epi. Note the subtle shifts of colour in the warp where silk threads are modifying the dull purple and gold.

Weaving. 0900–1600, every day for the next three days. With breaks for lunch, for quick lessons on the principles of weave design, to admire each others weaving, but still almost all weaving, almost all the time. It was WONDERFUL! 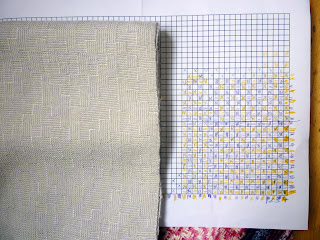 I fell in love with shadow weave. So I had a lesson on how both yarn colour and weave structure can be used to create a change in direction when and where required. And I brought home something to remind me that I want to do this, too.

Hard work, but full of wonders, of little flashes of enlightenment and inspiration. And laughter! We're all concerned that Janet's website photo makes her look entirely too stern :-) Tuesday pm came too soon, but we'll all try to keep in touch and meet at Janet's again.

I arrived home with tangible inspiration: a sampler. Four feet of sampler, including a host of patterns all woven on a straight twill threading. Not yet washed, but Janet's class work with this particular yarn, a tightly spun worsted 2-ply, indicates it will not full and shrinks very little, even when machine washed (on a wool setting). So I will finish this properly once it's hemmed and I've done something about the ends where I've tied in new warp to change some colours, but I am reasonably confident that - with this yarn - shrinkage of the wool won't cause the silk to buckle. 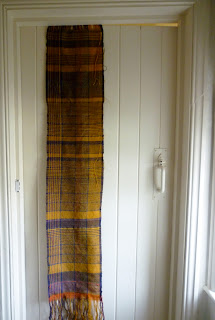 The sampler and the process of weaving it has answered many other questions. 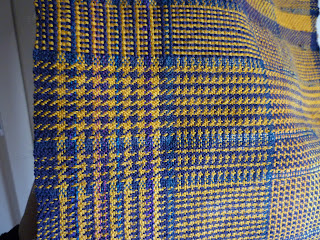 Not only do I have more confidence winding and beaming a warp (and correcting mistakes!), I know how adding silk thread to the warp will work, and what it adds to the fabric. I know that the silk I planned to use for weft wouldn't work as I thought. I can make a beautiful fabric without it, just by adding silk thread. I have some idea of the best way to add the silk to both warp and weft. 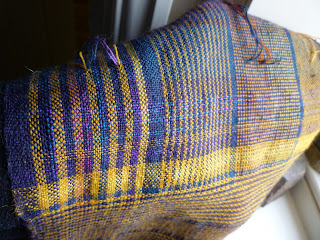 And I totally love what I made.

If you've survived reading this far, here are the thoughts I promised. I am extraordinarily fortunate to have been taught by three amazing weavers, Sara Lamb, Stephenie Gaustad, and Janet Phillips, each of whom has a different style of teaching and seems to be interested in different aspects of the craft of weaving. And yet, driving home, I found myself thinking about what unites them in my mind: their passion for weaving, their love of weaving, and their drive, their deep desire to convey this passion to their students. To me it's this last that defines the very best teachers, because how can we, their students, fail to respond to such a gift?

I will thank them with the work of my hands. I will weave.
Posted by sarah at 03:20