A New Year at Clopton

New Year's Day dawned bright and so crisp it was downright *cold*. The hard frost meant the local clay would be frozen if I left early: a good day for a walk, and the history of the site I had in mind seemed appropriate for what we think of as the first day of a new year. I drove to Clopton, the best-preserved and most well-documented deserted medieval village (hereafter DMV) in Cambridgeshire. It's not far south and a little east of Hayley Wood.

That patch of green pasture full of lumps and hollows was a thriving village 700 years ago. It lies on a south-facing hillside sloping down from the boulder clay plateau to the silts and clays of the Rhee valley. Look closely and you may be able to see the route of the road west, across the green, the line of Clopton High Street running south and curving away from the modern straight farm track, the hollows that mark man-made ponds, the site of the Bury, and of a second moated manor house... all that remains to mark the lives of thousands of people who lived here over the span of at least 2000 years. 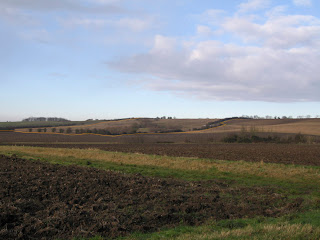 I walked east from the junction of Croydon High Street and Croydon Hill, along the bridleway/track that was once a major road linking Biggleswade on The Great North Road (now the A1) with Arrington and Cambridge. 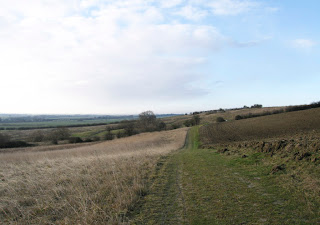 The village was extensively investigated in the 1960s, when archaeologists found the site was originally a Roman/early Anglo-Saxon settlement. In the 13th century it was so large that it required reorganisation: the hillside was terraced to provide more room for housing, the High Street was cobbled and realigned around the Churchyard, and the road to Croydon on which I walked was terraced and drained. Excavations found the Church, graveyard, Rectory, marketplace and various roads. What does it look like today?

Click to embiggen
More years ago than I want to think about (but a blink in time by comparison with the age of the site), I drew a reconstruction of the features found during the excavation. To my astonishment the board is still there... 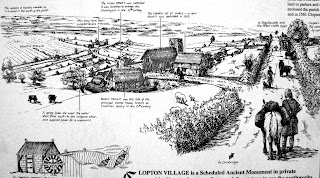 The redrawn medieval illustration at bottom left shows an overshot watermill and eel traps in the millstream. The mill here was more likely to be undershot. 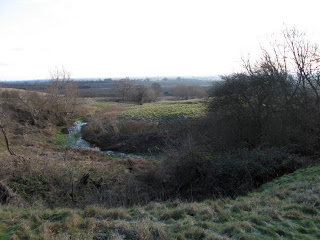 One of the manor houses, the Bury, was built on this mound; the moat is spring-fed, and was deep enough that a child drowned here in the 14th century. Walk south across the marketplace between the Bury and the Church of St Mary and, in the southeast corner of the pasture are the hollows that were millponds or fishponds. 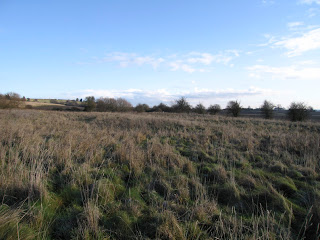 Walk back up the hill towards the road. 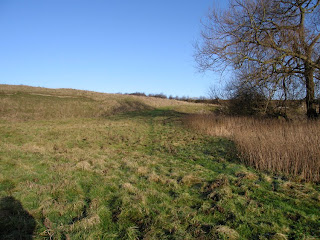 This photo was taken standing on the High Street in what was once the marketplace. The scar in the hillside is a small quarry, dug long after people ceased to live here. In the 15th century the Manor was purchased by the Fisher family who, like many other landowners of the time, saw that the pastures and fields would be much more lucrative if used to grow sheep instead of crops to support a village. Grain prices were low, labour was expensive, and wool was very valuable. John Fisher and his son both had legal training at a time when litigation was expensive, and they began a campaign to force their neighbours off the land. Even the Clopton family did not escape: Robert and Juliana Clopton were imprisoned for failing to give up their manor house. Ordinary villagers had no chance: by 1525 only 5 labourers remained at Clopton. In 1561 only two houses remained; the village was declared extinct and merged with Croydon, to the east. Clopton Church was already ruinous, but stood until it was demolished in the early 18th century. 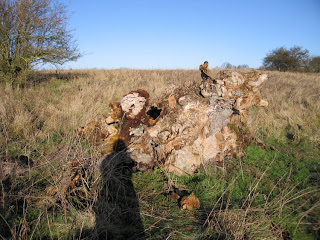 Another sign of time passing. This is the hollow body of a pollard elm that was alive and well in the field north of the village during the Middle Ages. Killed during the outbreak of Dutch Elm Disease, it was still upright when I first visited here, 20 years ago, but has since fallen and is slowly rotting away. Looking east, back the way I've walked, and see the track heading west, out of the pasture. It was worn into a hollow across the hillside – a hollow way - simply by the passage of feet over the centuries. 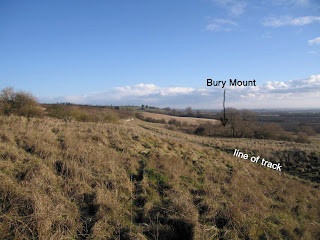 Clopton was much larger than the area preserved as pasture. There were houses in the arable fields to the west. 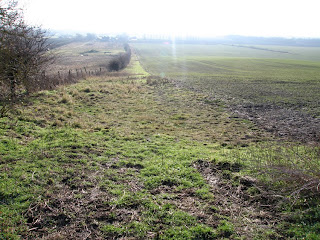 In the distance, to the left, you may just be able to see the moat of the second manor house shown on the reconstruction. A very brief (it was getting very muddy and I didn't want to stray from the right of way) excursion along the field margins yielded 1) a fragment of oyster shell, a long way from the sea: oysters were a popular foodstuff in Roman and medieval times. 2) fragments of medieval tile. 3) a bit of a guess, but I think this may be slag from minor ironworking. The iron-rich Greensand is not far away. 4) another fragment of oyster shell – but this time, it's Jurassic. Probably from the Oxford Clay, not too far away because it shows relatively little wear for something that was brought here by a glacier almost 500,000 years ago. I truly value the sense of perspective I gain from holding this assortment of stuff in my hand. 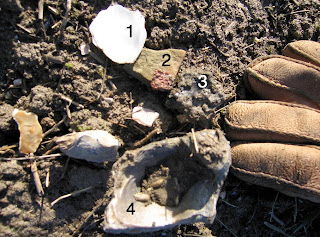 The path wends westward, but my shoes are picking up great clods of clay and I hate that. Time to head home and make lunch. No oysters, though. 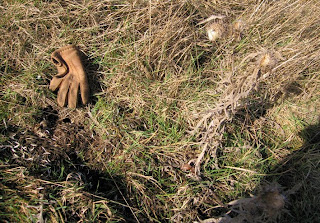 Someone else's lunch or dinner. My glove points to the round entrance to a network of vole tunnels in the tussocky grass. Just visible against the dark ground in front of it are the white plumes of thistle seeds, minus the seeds, and some of the thistle seedheads have been diligently emptied. Perhaps there was a vole party here last week, under the snow?

It is astounding sometimes to think who lived in a place before nowadays - how many people, and how they lived their lives, and what of their activities can still be seen on the land. Even here in New England, with a much shorter period of European occupation, there are many, many 1700s and 1800s house visible now only by their stone foundations. The same for the many old mills on the small, fast streams around here; I'll have to go find some this spring, when the snow's gone. Thanks!

I'm in awe of how you point out the details in the landscape. I'd never have realized there was a manor house, nevermind that it had a moat. To me, a mounded shape like that means rock underneath.

thanks for all the historical detail. i skimmed through your blog but caught one phrase about how you come from the Prairies.
I too spent the first years of my life on the Canadian Prairies before moving to germany, the land of my mother.
and here i thought that you were from the u.k., because you knew such details of your surroundings...
now i moved continents again, and live in british columbia's lower mainland where "old" means approx. 100 yrs.! (it's much newer than eastern canada).

What a lovely drawing that is!

And when I read your blog, not only am I fascinated by the details and the history, I keep saying to myself I have to always take my camera even when I just leave the house for the dogwalk in the scruffy downtown. I'm always seeing something I could take a picture of, except - the camera's at home. And there are these little inspirations, little glints of hope all around.

Perhaps tomorrow I'll remember. But then it will be snowing.

lovely post, we just walked part of the Clopton Way past this DMV. Now I know better what we saw! If I may add something as an amateur medievalist, what was it built halfway uphill, surely not for the view?! You say it's a market village, and those are built along roads, could that not be a Roman road it's along? Such roads were built for military transport and most often halfway uphill, a to avoid the muddy valley bottoms, b to avoid ridge lines that silhouette troop movements to enemies. What do you think?

Hi Andrew, it's a walk I enjoy, especially as I remind myself of the age of the track I'm walking and the variety of people who would have used it over the centuries; as you've guessed, it's a very old road, the original prehistoric (and Roman) route along the valley. The current main road on the valley bottom is much later, an 18th (I think) century toll road.

As for reasons that the road and settlements (Croydon is at the same level) are halfway up the hill, my guess is that it's because that's where the spring line is, at a point where the junction between the Chalk and Gault Clay (below) is exposed. Croydon is also located at a spring, and the 1948 OS map show several more rising roughly along the line of the track. Many of these have disappeared as abstraction lowered the water table. The higher hillside is capped by heavy till, glacial clays and gravels, so settlements such as East Hatley rely on wells or much smaller springs based on gravel lenses in the clay.

I hope this is useful!