^1: if you don't know the origin of this phrase, I suggest you obtain a copy of 'The Princess Bride' (book) by William Goldman or the 1987 film of the book, make a cup of your favourite warm beverage and settle into a comfortable chair for a pleasant afternoon. 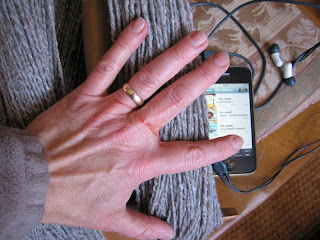 How to identify over-twisted singles: if they wear ruts in your fingers, your singles may indeed be over-twisted.
There's more to the problem than that, though, and it relates to a second kind of pain. Lesson learned from recent spinning: if a new spinner came up to me holding The Most Beautiful Fibre in the World and said "it's for when I'm a better spinner", I'd advise them from bitter experience. Spin it sooner rather than later. Don't fondle it, allow others to fondle it, don't carry it around like a security blankie. Don't make it the very first item in your stash bin, carefully piling other stuff on top of it because you'll spin that other stuff first, and you want The Most Beautiful Fibre in the World to be there, a treasure to reward you when you've spun your way through the dross. Do that and the fibre may still be pretty, but it might not be the nicest fibre to spin. 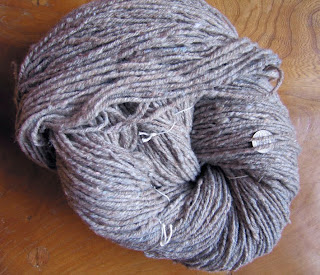 Exemplar the First. That was two large rolls of 'Montana Agate' roving, a blend by Three Bags Full from The Bellwether, bought in my first flush of enthusiasm three years ago. Lovely stuff, a subtle blend of silks and wools. Huge, lofty bags, they were... but when I found them in my Bin of Treasures, they'd been squashed beyond recognition. Fortunately the wool bounced back a bit, lofting as I ripped chunks off, but it never regained enough air to become a pleasure to spin. I've become so accustomed to drafting with ease that this took me by surprise; I knew some was over-twisted, but I hadn't realised how badly until I plied it. The singles were twining around themselves even before they hit my left hand, and it's the constant forcing back through the incipient tangles to get another arm's-length on its way to my right hand and the orifice that cut into my fingers. It's become 345m of 3-ply. Lots of hats and mittens, perhaps. 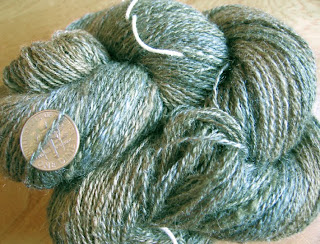 Exemplar The Second. 60g of cashmere/silk from Chasing Rainbows via Crown Mountain Farms. Bought in that same dangerous spate of enthusiasm, the single most expensive fibre I could imagine owning (hear me and my current stash laughing at my younger self :-). I carried it around for ages, marvelling at its softness, then hid it with the other Treasures. When I pulled it out last month I instantly realised that in my ignorance I'd compressed it badly. It was reluctant to draft as thinly as I wanted, but still I've got 400m of soft lace shading from gold to forest to olive green (I've tried to tweak that shot to give you some idea of the colours). Eerily appropriate for what should be my next project... 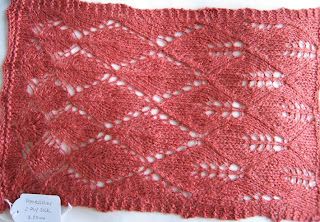 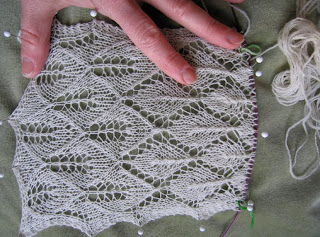 It's a variation of the patterns I used in the 'Teaching Shawl', most of which are based on various forms of leaf lace. I'm minded to put a lifeline through the current version when I reach the end of the chart, then strike out for unknown territory and a pattern for a different shawl. If I am pleased with the result and can remember what I did, I will chart it (yay! for KnitVisualizer) and then knit it in that green and gold. I've just remembered that those are the colours of the U of A. Ah, memories.

There's been a lot of knitting going on here. Slowly. 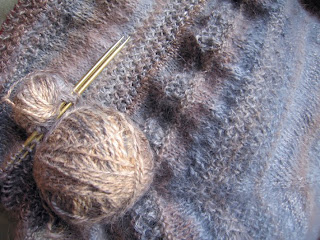 That's my 'New England' Luxury Spinners' Set from Spindlefrog spun as a heavy laceweight 2-ply, becoming a Textured Shawl based on Orlane's Textured Shawl Recipe (Rav link). I've added a texture or two; I keep telling myself the unevenness will magically disappear during blocking. Fingers crossed... 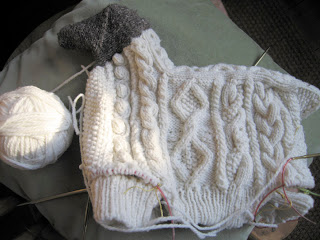 Sam the Ram is progressing, too. Although I was wildly over-confident of my ability to graft k1p1 rib. I may rip that belly graft out and try again. The rest of the spaghetti is, as far as I can tell, on course to become legs at the appropriate points of the body. Only time and patience will tell. It's still one of the most fun things I've done: the shaping of the head, the way the body is constructed are revelatory about the things that a plane of knitting can be made to do.

I managed to get quite a lot of spinning done this the weekend. 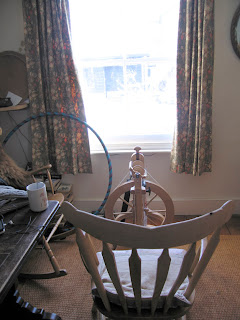 The window is blinding white because we've got snow. Quite a lot of snow, in fact. We woke up on Friday morning to this 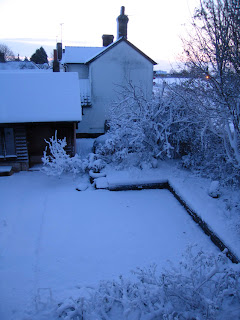 and most of it is still here. It's COLD. I need a sweater, I'm in a KAL with Lynn - and due to my greed at SOAR, I have a duff right elbow that's restricting me to about 15 minutes knitting at a stretch. It's getting better, though. Slowly. I wonder if the realisation that I'm healing more slowly, aching more often, is one of the reasons that I feel so strongly my time is running short, that I have to get everything I want from Life sooner rather than later? This is the only Monday 21 December 2009 that you and I will ever have, Dear Reader. Let's put it to good use. I am going to do a solid hour of work, and then I am going outside to glory in the myriad shades of blue created by snow and sky.

Good heavens, you have more snow than I do! And don't worry about the KAL; baby that elbow so it heals sooner rather than later. And if it helps, I've had problems spinning newly acquired cashmere-silk because it was too compacted - maybe something in the dyeing process? I don't know.

I suppose I can say this in public. I have felt that sooner rather than later feeling a great deal recently. I don't have real reason (yet), but I just get the sense of time ticking away. My stash is big. I don't expect to use it all up, but the idea that something might happen to me before I get to the choice bits (your post is sobering, BTW), is weighing heavily on my soul. It's probably one of the reasons I did the rowing challenge...maybe stave off age for a bit. Or feel the illusion of some modicum of control? Who knows. I watched the second go by on the monitor yesterday, and admonished myself, "DO NOT THINK LIKE THAT". But how can one not? They go by so quickly, a metaphor for sure.

I love that strawberry color! And your spinning is very nice--when knit up, it will be beautiful!

And thanks so much for your suggestions. I will see about a book and a video in 2010.