Of love and socks 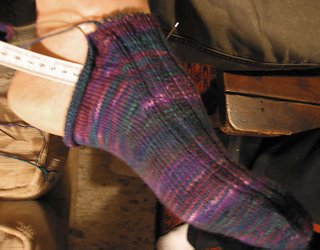 I've read other blogs wherein knitters describe knitting 'love' into every stitch knitted for a significant other. I've been trying but, my word, at this stage 'love' is getting every third stitch. 'Disbelief' and 'incredulity' get the other two. There is NO WAY that the single skein of CTH supersock is enough to finish these socks. Admittedly, it was the very first sock yarn I ever bought, and I used a very little to make my very first circular swatch, but that's only about 5cm in a very narrow tube. The rate at which the balls are shrinking suggests I'll run out about an inch after finishing the heel. I have another skein of the colourway, but it's a different batch and quite noticeably darker. I'll do the heelflap in the new skein and then I think I'll stripe the old and new Fibonacci-style. If I live that long. That's a metric tape measure and one of the socks on his foot last night, by the way. His first appearance on the internet: a star is born!
I was puzzled by the rate at which these socks were eating yarn. I mean, I get a decent pair with yarn left over (log cabin something in the distant future) out of skeins shorter than this. So I did some calculations:
His basic sockfoot is a 72-stitch tube. At 12 rows/inch, that's 864 stitches/inch. I did about 8" of that, which is 6912 stitches. Each gusset builds over 4" to shakes head in disbelief 24 stitches. So at this stage (the heel starts when I go back downstairs) the tube is 120 stitches. A fair guessimate of stitch numbers would be half the gusset stitches over the length, which is ... 4608 stitches. So that's 11500 stitches in the foot. Stitches in the heelflap? It'll be about 30x12x2, a paltry 720, add the short-row heel and call it 1000. That's 12,500 stitches plus the leg... 72x12x7ish, call it 6000 minimum. So each sock each sock! is at least 18,500 stitches. I'll be knitting 'desperation' into them before the end. But he likes the fit, he really does. He says his gran used to gift them handknits, including socks, when he was little. He remembers 'crunchy, hard' socks (what did she knit them from? entire sheep?), whereas these are soft and warm and fit perfectly. Perhaps there's more love in there than I thought.

When I'm not knitting or working, I'm trying to strike a fine balance in the garden between untidy (for wildlife) and tidier (for the garden design, which demands clean lines). We've got two tiny patches of lawn, one of which is shaded for much of the day, so remained reasonably green during the drought last summer (watering is not allowed). The other is in full sun, all day. By September dandelions were the only green things in it. So I devised a cunning plan: I would allow the grass to grow longer on this side, plant wildflower plugs, and turn it into a tiny haymeadow. Ha. It started raining in October, and only recently stopped. The tiny meadow cut for (an armful) of hay in September was a tiny sea, a torrent of green in November. It looked dreadful. The grass had to be cut, but it was far past the stage where our little push-mower (that's actually our mower model. Astonishing) could tackle it. Desperate times demand desperate measures: I resorted to my garden 'scissors'. It's taken me two days, but that (12m^2) lawn has been, er, cut down to size. Now I have access to the rotting railway sleepers that edge a raised bed (on the right, below), so I can replace them with new equivalents, and re-lay the 'temporary' brick edging where the vegetable patch meets the lawn. 'Things put off don't happen', as my mother used to say. How right she was :-( 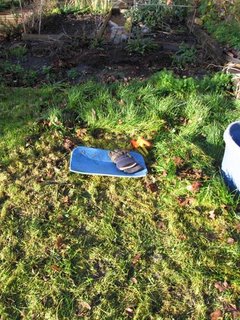 Ahhh! The math, stop with the math!! The way to knit love and big socks is to think happy sockthoughts and just do it. Listen to an audiobook or the radio and stop thinking about every stitch...that will just make you crazy. They are beauties, by the way. Going to be gorgeous.

There is no yardwork going on here, even though we've had an unseasonable bout of warm temperatures. I'm impressed by your lawn cutting industry!

Oh, one last thing. All the crack heads I mentioned on my blog? Not one of them was under 18. All of them were full fledged adults, likely in the "Over 25 to 55" category. I think our cultures like to blame kids...you're right about that. I hear it all the time regarding loose dogs and cats. The culprits aren't the university students, either. They are irresponsible adults. If adults could just be a bit more responsible, maybe the kids wouldn't catch the blame!

So true, or so it seems to me. We adults should set good examples, or at least better examples. And remember that, where kids are concerned, they *are* kids. They've a lot to learn and it's up to us to work out what we're teaching them.

Don't be impressed by the lawn-cutting, it was my just dessert for a silly idea. 'It seemed a good idea at the time' echoes in my head so frequently...

Have you considered stopping the original ball at the heel or wherever and using the other skein instead? And then doing the same for the other sock?
This would, obviously, give you ankle upwards socks which were a bit darker than the rest of the sock, but a) most of the sock will be in a shoe and b) if the socks match, it should look intentional, even if anyone besides you does notice...

But those socks are the most fabulous colour, and look wonderful so far.

Thank you! That's a good solution and, as usual, I hadn't thought of it. Probably because (I have to admit this) I have another cunning plan: I want to learn to make multi-colour socks, so I seized on this problem as an opportunity to start practicing.

I'm sorry I have no sock suggestions for you, since I've made one pair successfully and the other pair was frogged to the point of no return. But it sounds like you've got some good ideas in the comments.

It's amazing you can garden this time of year. Perhaps you live in a mild area? Our ground is mostly frozen, and I didn't get out there to remove the dried stalks and things in time. It needs a good cleanup, but perhaps it will benefit the animals. :)

The soil rarely freezes in the places in the UK where people live (as opposed to mountain tops :-) We had a very cold spell for about a fortnight/3 weeks a few years ago, when the ground froze to a depth of about 2", but that's unusual. Usually a hard overnight frost penetrates 1/2" of so. Sometimes we get a few inches of snow (and the country grinds to a halt) but mostly it's just wet. Which is just as well, as most houses are waterproof, but relatively few are built to the same insulation standards as those in the northern US and Canada!